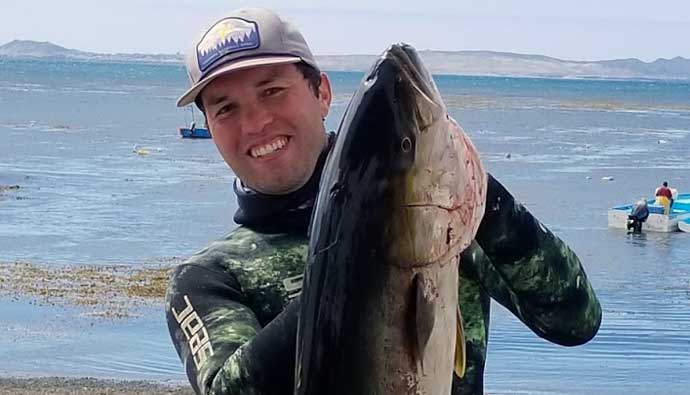 The yellowtail fish is one of the prized fish of California to catch by rod and reel or spearfishing.

Also known as the kingfish, yellowtail kingfish, amberjack, yellowtail jack, and king yellowtail, this fish is a member of the Carangidae family. However, anglers usually categorize them into three different species namely southern yellowtail, California yellowtail, and the Asian yellowtail.

These are plentiful in the Pacific, Atlantic, and Indian Oceans.

In this article, we’ll discuss yellowtail facts, how to catch them, cook them, and how to prepare them. Let’s dive in!

Yellowtail usually spawns when it is about two to three years of age and the eggs hatch in two days. The fish travels in large schools around coral beds and reefs and will rise to the surface en masse to feed on baitfish. Plus, yellowtail tastes buttery and has a mildly sweet flavor.

These usually feed on whatever’s available, but their main diet consists of smaller fish, squids, and crustaceans. Larger yellowtail fish have been known to tackle tuna and bullfish as well. This fish is threatened by overfishing, so much so that at one time only one colony remained in the state.

When it comes to yellowtail fishing, you can use both artificial and natural bait as well as trolled and jigged lures. They love live bait such as jack mackerel, koheru, flying fish, squid, and piper, but live kahawai can be used to bait larger varieties.

However, you can also use a soft plastic or large lures that can be retrieved quickly.

When searching for the best yellowtail lure to attract this quick fish, speed is the key to success. Yellowtail is attracted to fast objects or erratically moving lures since it confuses them as insects or small fish. To increase your chances of success, use mechanical jigging and vertical, high-speed jigging that can bring the fish to the surface fast.

The tackle you use should depend on the size and strength of the yellowtail fish you want to catch. Large ones require a heavy tackle that won’t break as this powerful fish struggles. As for lines, if you are using live bait or trolling, use a 30 to 80 pound one and if you opt for vertical jigging, use an 80-pound braid. If you are using soft bait on the other hand, use a light line.

If you have the chance to go spearfishing for a yellowtail, you’re in for a treat as it is one of the most common target fish in SoCal, along with Bonito fish, Opaleye, Sheephead, and a few others. If you go for them in Southern California, it’ll be a bit harder than if you go down to Baja. Catalina and the various islands in Southern California can be fruitful.

We highly recommend you go down to Baja. It’s not uncommon to be walled by schools of yellowtail…so many in fact that you can get bored of shooting them.

Yellowtails are active in March during the spring and can be caught using live bait such as mackerel and sardines.

Yellowtails are abundant in late spring and early summer and can be found 60 miles from the shore.

Catch yellowtail in the fall with jigs, live bait, and topwater irons.

How to Clean Yellowtail Fish

If you want to try raw yellowtail fish, then I recommend you watch a few videos on YouTube to see how they make sashimi. Just be sure your fish is free of worms and other pests and remember that there’s always a risk when eating raw fish.

Be safe, but I must say, it is mighty tasty!

It has a subtle buttery taste with hints of banana. It tastes like fish that belongs to the mackerel family but it is much milder.

Is yellowtail the same as tuna?

The two fish species are often confused with one another but the main difference is that the yellowtail is a cousin to the Amber Jack while yellowfin tuna is a tuna fish that grows to enormous sizes. Both have similar-looking yellow tails which are where the confusion lies.

What are the common names of the yellowtail fish?

The mighty yellowtail may be a powerful fish to catch, but it can be conquered with the right bait, tackle, and lures.

Check out the ones mentioned above and try them out yourself or if you have tips and tricks that worked for you share by commenting below.

Feel free to share this information with other anglers and newbies who want to try their hand at catching this fish.