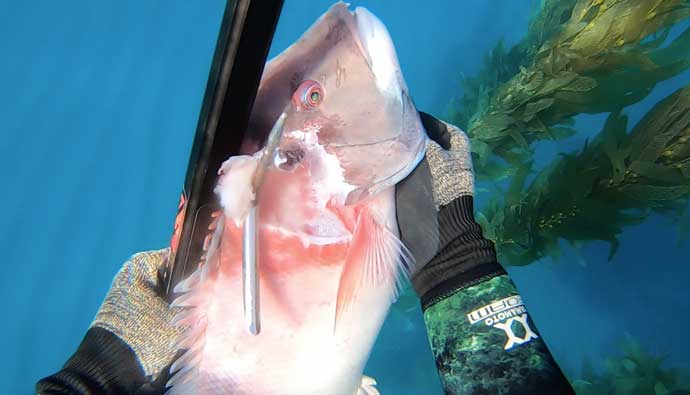 Are you having trouble catching the strong, bottom-dwelling California Sheephead?

If you said yes, you are not the only one.

This fish can be found in Baja California, Mexico all the way up to Monterey Bay, California.

Also known as sheepie, goat, sheephead, red fish, humpy and fathead, the California sheephead is a member of the Labridae family of wrasses. A strong bottom dweller, this fish is a favorite with spearfishermen/women and anglers who enjoy their fight and challenge to catch.

The body of the sheephead is long, robust, and compressed. What really makes it truly special is that it starts its life as a hermaphrodite – it is born as a female and turns male as it grows older, similar to the slippery dick fish. The sex change is apparent since the fish changes its appearance as it transitions into a male.

Younger sheephead females have a pinkish hue with a white lower jaw. As they grow older and turn into males, a third of the body turns black while the midsection remains red and the lower jaw remains white.

Sheephead has commercial value, but it has been overfished to the point that it has been replaced by rockfish.

How to Catch California Sheephead

The sheephead is a sucker for a range of cut and live baits from anchovies, baby octopus, and squid. It doesn’t matter if you use fresh or frozen bait, they aren’t picky eaters. You can also use live mackerel for larger sheephead.

The fish rarely strikes aggressively and will tap at the bait before trying to eat it whole. A tackle that can help you sense those sensitive bites should be in your fishing gear and it should also give you the power to wrestle a big one from a structure. It could also be beneficial to use braided fishing line for the added sensitivity and to help you deal with the kelp if it’s in the area.

A common rig to use for catching California sheephead involves a sliding sinker that should be used a couple of feet above the line. This is ideal for shallow waters. For deeper water, you can use a drop shot – hang a weight from the dropper loop and have you hook 18 or so inches above with your shrimp, mussel, or other bait.

As for setup, make sure that you have a heavy tackle on a good braid complete with a fluorocarbon leader. Sheephead can be fierce fighters and heavy to boot after all.

The official recreational fishery for California sheephead is available all year round to divers and shore-based anglers.

However, anglers who wish to fish from boats can do so from March to the end of December. Since the fish species is considered to be vulnerable due to overfishing and capture for the live fish trade, it is strictly regulated so chances are you may not be able to find them in the wild.

The best time to catch California Sheephead is in the spring.

Goats are a common fish to target for the spearo in California. They don’t tend to be the smartest fish in the sea and are easy to stalk and hit with a speargun. To add a bit of challenge I’ve actually started targetting them primarily with my Gatku pole spear.

They usually swim in pairs so if you spot a smaller one be sure to wait a few moments to see if the larger one shows up.

These fish are slow growers and since they are easy to kill, make sure you only take what you plan to eat.  If you see a monster size one, leave it be so that it can reproduce and help bump up its conservation status out of Vulnerable. 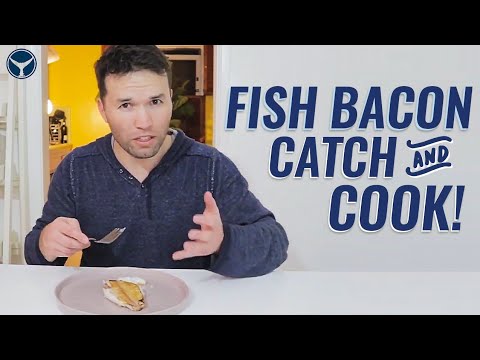 Sheephead does not have a firm consistency. Therefore, I recommend you try steaming the fish to mashing it together to give it the texture of crab meat.

The flavor isn’t strong so it works well to mix butter and other seasonings into the meat.

Toast up some King’s Hawaiian rolls and toast them on a cast-iron skillet. Add your meat and butter mixture to the toasted bun and drizzle with more butter.

You know have a poor man’s crab roll that tastes amazing!

Since sheepies have soft meat, it makes for a delicious ceviche.

Clean the fish as you normally would and dice the raw meat into a half-inch to one-inch cubes. Throw them into a bowl with lime juice, minced or crushed garlic, cilantro, tomatoes, avocado, and your favorite seasonings.

Let it sit in the fridge for at least an hour.

DISCLAIMER: Remember that any time you eat raw fish you’re at risk for food-borne illness. Just be careful! And make sure to clean and fillet your California Sheephead thoroughly and properly to reduce such risk.

A: The flesh of this fish is white, firm, and has a mild taste making it perfect for chowder and salads.

Q: When are California sheephead most active?

A: The fish hunt actively during the day but move to crevices at night and wrap themselves up in a mucous cocoon to stay safe from predators.

Q: When does a female California sheephead change sex?

A: A female turns into a male when it turns 13 years old. The species can live up to 21 years of age.

Q: What kind of bait is best for sheephead?

A: A variety of invertebrate bait can be used to attract sheephead such as bloodworms, shrimp, ghost shrimp, fresh mussels, and cut-up squid.

Q: Where can the California Sheephead be found?

A: The fish tends to remain near kelp beds, piers, or rocks, and few venture out in open water for fear of predators. The best sites to fish them in include Ocean Beach Pier, Santa Monica Pier, Paradise Cove Pier, Redondo Sportfishing Pier, and San Clement Pier.