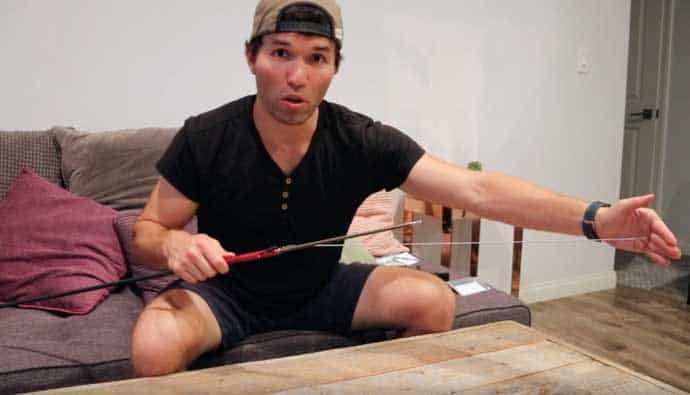 When I was first introduced to spearfishing I immediately fell in love with pole spears. Here’s a Gatku pole spear review guaranteed to make you want to add it to your arsenal!

Before I ever heard of Gatku Polespears, I was using the yellow single piece fiberglass pole spear…it was horrible.

I was able to hit fish with them, I knew there had to be something more professional and effective.

When I did my research on the best pole spears, the one that stood out the most was the Gatku pole spear. I reached out to the owner Dustin and asked if I could try one out for the article.

He sent me one to test out! He knew that if I tried it, I’d fall in love with it.

From what I’ve heard, I wasn’t the only one praising Gatku pole spears. A lot of the guys on Spearboard and other forums said they’re super fast and great if you’re around the reef area.

Visit Gatku.com and use promo code “JonCastandSpear” for a FREE dive knife, keychain, and more!

NOTE: The Gatku is not a sling spear, but a pole spear. Some call it a Hawaiian sling, but I’ll just be referring to it as a pole spear in this review.

Let’s take a deep dive into everything the spearfishing pole spear has to offer.

The Gatku comes in a signature red anodized aluminum base with the logo painted on the bottom. It’s also made in the USA, which is a plus.

It has a serious grip. It’s a wire coil with shrink wrap over the top. It feels really comfortable.

One of the most popular accessories is Gatku G-String.

This is always nice because you’re able to load up your pole spear and hook it onto their metal clip. This allows you not to have to use your muscles as searching for fish.

Then when you want to shoot, you take it off this and you load it up and you let go. So that’s, this is super cool.

You can’t have too many dive knives. It’s a bare-bones knife that’s full metal and comes with a plastic locking sheath. Probably not going to be your main dive knife, but a great secondary one to be placed somewhere on your body.

How to Make a Pole Spear

All right, let’s put this bad boy together.

It has a well-constructed aluminum pole spear base and definitely feels sturdy. It has a female port at the top.

The mid-shaft is made from carbon graphite that has an aluminum base with a, super comfortable grip. The grip has ridges that your fingers can hold on to. The grooves are wide enough for your spearfishing gloves to get a good grip.

And then at the top, we have the connector port for whatever pole spears tip you want to use.

When you’re torquing down the different components, make sure you don’t overly crank because you don’t want to strip the threads.

It’s too expensive to try and rethread it. You’re probably just going to end up having to buy a new pole spear, so always be careful.

This pole spear is balanced nicely with the center of mass near the middle but closer to the handle.

You know, the handle for some might feel like it’s more in the middle and not really at the top, but when you load it up with your hand, it feels like there’s a lot of power.

Gat ku pole spears are a hybrid pole spear meaning it’s not a full graphite pole spear but blends sections of aluminum and carbon graphite throughout their construction.

Carbon graphite definitely has a little bit more flex than say a full metal pole spear, but that’s going to increase the ability for it to travel to the water faster with less mass to move in the water.

Due to the grip being lower on the pole spear, it doesn’t take much force to load up the band. The power profile is geared more towards close-range reef-type environments. If you need something that packs a punch, try the Crist Neptune.

Pole spears come with a variety of tips. These include the:

If you want to make a slip tip spear, feel free to use the slip tip for pole spears instead of the flopper or 3-prong tip.

On a side note, I used to run a machine shop back in my old engineering days and I can just tell that this thing feels like quality.

Props to Dustin and his team. They really know how to put together and work in that machine shop nicely.

You can think of the Gatku pole spear as the Ferrari, whereas the Crist is more of a Mack truck.

I want to show you how to put on the g string. This is where you hook this end to the rubber. And then when you’re pulling tight and say you’re just swimming around, you’re waiting to find a fish to shoot you actually resting the loaded band on a string and not using your grip to hold the pole in place.

When you are ready to shoot you remove it. It can be a little bit challenging. You’ve got to kind of stretch the rubber, kind of stick it in, boom, just like that. And then you want to get it even, and it has this little Allen screw with an Allen key, and this is just going to lock in that band so it doesn’t come off.

So get it relatively tight. Don’t overdo it, you don’t want to strip it.

And that’s how you hook it on this end. Now let’s hook the string to the front of the pole spear. So the string part of the g string, you’re going to have this piece of string with a small loop in a large loop. Take the small loop and put it over the tip. Slide it all the way down until you get to the handle.

Yeah, and then this slipknot just pull it tight. It’s not gonna go anywhere. So now that you have the g string installed, let me show you how to load it. Get your hand where the band is. You have your metal hook, you pull and you hook right to that string.

Also, go to the gym and lift weights because as you can tell, I know now that you have the g string loaded, you can go and swim and try and find that fish and you don’t have to use any energy, see how it’s already preloaded.

But as soon as you do see that fish and you want to shoot, you simply pull on load point shoot. So if you decide not to go with the flopper and you want a slip tip, depending on the type of fish that you’re shooting, it’s really easy to install.

This is the base, so it’s a, it’s a metal rod, with a blunt tip, you screw that on to the tip of your pulse here. And this is also nice about the gap cause you can switch out tips, say break one and you know you damage it. You can always get another one on their website.

It’s as easy as looping the slip tip wire on the slip tip rod and pulling tight. The video definitely makes it easier to comprehend.

The benefit of a slip tip is that whenever you shoot a fish and you penetrate, this slip tip will break off the cable gives it flexibility so it doesn’t just pull off the fish and you lose it. And it’s nice because this cable, you know, it’s not going to go anywhere. It’s not going to detach.

If you want to take it off for whatever reason, said we just pull out this cable, pull it out the base and you can replace it. You know, if you break it, you don’t it, you need a new one, or if you just need to store it.

All right, my final thoughts on this, it’s an excellently crafted spearfishing pole spear.

This pole spear can be used for beginners, but it’s probably better to learn the first couple of times on a cheap pole spear. If you’ve been pole spearfishing for a little bit of time, say a few months to a year then definitely go with this two-piece, eight-foot pole spear.

You’re going to cover pretty much most of all of your needs around the reef.

If you need a spearfishing pole with a bit more power, jump up to the NINE‘ER or TEN‘ER.

This carbon shaft really reduces the weight. The G String is a nice touch, but if you’re relatively new to pole spears, it’s probably not necessary.

I would go, I would go with the flopper just because it’s robust, probably not going to break. It’s on the cheaper side.

You know a lot of people have been telling me to go with the slip tip pole spear, but for the newbie, it’s a little more expensive and unless you’re going for bigger fish, the flopper is probably going to do a majority of the work for you.

I feel this is the best pole spear for the money. Plus opt for the 3-piece EIGHT’ER because it makes for a solid travel pole spear if you want to bring some effective fish-killing gear with you on your adventures.

Hey, you made it this far! I definitely want to hook you up with some cool goodies.

If you visit gatku.com and use code “JonCastandSpear”, you’ll get:

And a big shout out to Dustin and his team for sending me over this pole spear to review.

Try it out, you’ll love it!

I’m going to be using it quite often over the next season.

See you in the water!