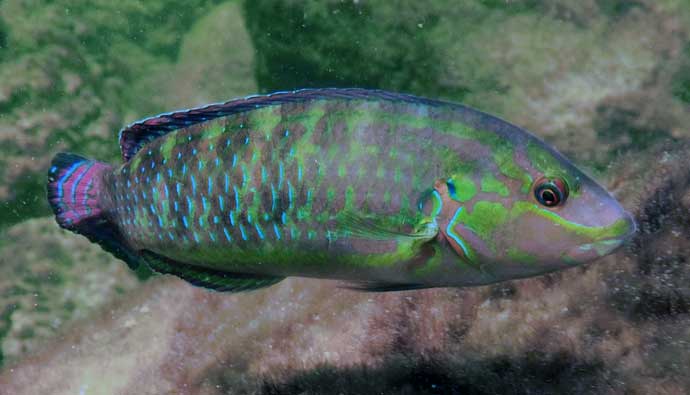 What’s the name of the fish that looks like a dick?

Use this guide to have a bit of fun going after a fish you can laugh about later.

The slippery dick, Halichoeres Bivittatus, is a small fish that belongs to the wrasse native species. The fish has a slim, elongate body and an average length of 14 cm, but they can grow up to 35cm. In Mexico, this small fish is popularly known as doncella rayada.

The fish was given its colorful name from the shape, texture, and size of its body many decades ago. The genus Halichoeres comprise 70 species worldwide, nine distributed in the Pacific, 10 in the Atlantic, and 19 in Mexican waters.

The Habichoeres Bivittatus fish resembles the Neapolitan ice cream. A thin strip of pink, chocolate and other delicate tints runs the length of the color. They have projecting canine teeth and thick protruding lips that give them a unique profile.

They live in the shallow reefs and seagrass beds in tropical waters of the Atlantic Ocean from North Carolina to Brazil. Also, they can be found in the Bahamas and Bermuda.

What is fascinating about this fish is that it is a protogynous hermaphrodite – it is born as female but turns into a male when it matures (similar to the California Sheephead).

Plus, they can be found ‘cleaning’ other fish by removing small organisms and dead cells from their bodies. This fish is not in danger of being overfished.

Here’s a fun fact: Locals in the Bermuda islands possess the superstitious belief that if they consume this fish, they’ll lose all of their hair.

Juveniles have a white body with two dark stripes that extend to the pectoral fin like the initial phase. They are light brown on the upper body, usually a little black or big blue patch on the middle of the dorsal fin. The majority have a black patch at the back of the pectoral fin.

The wrasses in the initial phase have a wide range of coloration, ranging from different tones of light purple to dark brown. The slippery dick wrasse has lateral dark stripes that extend from its pointed snout, the eye, and down to the tail, and the second, lower strip is less pronounced.

They feature pinkish or orange patterns on their head, which are occasionally highlighted in pale blue, and a little yellow and green bicolored mark above their operculum’s upper corner or pectoral fin. Some may also have another less dark stripe running from below the mouth right up to the tail.

The fish turns male in the terminal phase. These males have caudal fin lobe tips that are black instead of the varied hues of green and striped patterns seen in initial phase fish. They have a greenish-blue tail fin with three pairs of pink streaks running down from their top and bottom edges, converging at the tip of the fin.

They lack scales, have rounded heads, and have blunt snouts. They have two canines at their lower jaw’s back, a pair of larger canines at the front of their upper jaw, and one little canine at their mouth’s corner.

Also known as the ‘dick fish,’ Halichoeres Bivittatus is found in shallow water in rocky reefs at depths of up to 50 feet. They are also common in tropical and subtropical waters of the western Atlantic Ocean around shallow coral reefs and sea beds.

You will see them in seagrass beds which provide plenty of hiding spaces. They are diurnal because of their decreased sensitivity or motion at night.

What is fascinating is that the size of the fish depends on their location. Smaller or juvenile ones can be found in turf algae and sand rubble, while larger ones are usually found in rocky and fire coral reefs areas.

The slippery dicks remain near the sandy bottom or follow larger fish that disturb the sand. This exposes those invertebrates, which they then pounce on. Halichoeres Bivittatus may evade predators by sheltering in reef cracks. During the day, they may sometimes go out hunting in small groups.

Halichoeres Bivittatus are hermaphroditic protogynous beings. They start as females, but they develop into males as they age. Prior to spawning, the males gather together to establish leks where they engage in a competitive performance.

They use this tactic to show off their masculinity and entice female mates to mate. Since they are open-water (pelagic) spawners, they both sail above the reef and deposit their gametes.

The Halichoeres bivittatus don’t take care of their eggs. Instead, the fertilized eggs will stay on their own until they hatch. Fertilization typically occurs during the day.

The fertilized eggs are about 0.6mm and buoyant, but the unfertilized eggs don’t have the buoyancy feature. The eggs are hatched 24 hours after fertilization. Initial phase males often attempt to interfere with pair spawning, which normally happens among females and terminal phase males.

Because the terminal phase males’ color patterns differ significantly from those of the smaller ones, this species is believed to be sexually dichromatic (partially). Color, on the other hand, lacks a clear division between the terminal and intermediate stages.

Since there are no significant known threats to the genus Halichoeres bivittatus, the IUCN has classified it as a species of the least concern. Although they can be found in many maritime protected zones, their population level is still unknown.

They are uncommon in Brazil but common in other Caribbean countries. The species aren’t marketed as food, but they are gathered and raised in aquariums as part of the aquaculture industry. They do not constitute a pest issue and are not known to transmit any diseases to people.

How to Catch Slippery Dick

Wrasse, such as the slippery dick, can be caught with a wide range of live bait. This includes fresh pieces of fish such as pilchards, squid, and mackerel. Also, try ragworms, lugworms, prawns, shellfish, and peeler crabs.

Use a drop shot rig when fishing for this fish over reefs and rocks. If the line gets caught among the rocks, maintain steady pressure on the line by pulling it with your gloved hands.

Be careful when straining your saltwater rod, as you might end up breaking the light line that connects the weight to the mainline. Whatever you do, do not swivel the rig above your head to make an overhead cast. You may end up hitting and injuring someone!

You can also use a sliding float rig to catch slippery dick. The main line should have a stop knot where you want the float to stop. Use a ball-shaped weight and use the smallest one you have so that you can cast at the distance you are aiming for.

The best time for dick fish and other wrasse sport fishing close inshore includes the months between May and October.

The term describes the fish’s slippery nature. It is claimed to have come from how easily this fish slips from one’s hands when one appears to be certain of him due to their slippery skin and body shape. This fish can get away from nets, weights, or even hands with the help of its nimbleness and slippery surface. Small eels are often exceedingly slippery, yet in contrast, they are simple to grasp in hand.

What does the slippery dick eat?

It feeds on benthic organisms such as crabs, sea urchins, slugs, snails, and smaller fish. They tend to exploit disturbances such as overturned rocks which can reveal small invertebrates they feed on.

Do slippery dick swim in schools?

Juvenile and intermediate slippery dick can be found swimming together, whereas larger males swim alone. Some may even form schools with other species from different families that don’t pose a threat.

How does the slippery dick spawn?

Slippery dick fishes are born as females and turn into males when they grow older. Before spawning, the males compete to attract females for spawning. Once they attract a mate, the pair swims above the reef and release their gametes. The fertilized eggs drift through the current till they hatch, and the young take care of themselves. There is no parental supervision, and several hatchlings do not survive long enough to become adults.

Slippery dick is listed as ‘least concern’ since it does not have any known threats. While it is present in some protected marine areas, its population status has not been determined yet. The fish is usually kept in aquariums as part of the aquarium trade and is not marketed as food.

The slippery dick fish’s name may sound rude, but you should add this to your list of fish to be caught if you want to become a serious angler. The fish is gentle, especially when caught, such that you must fight while on your hands.

Will you angle for the slippery dick?