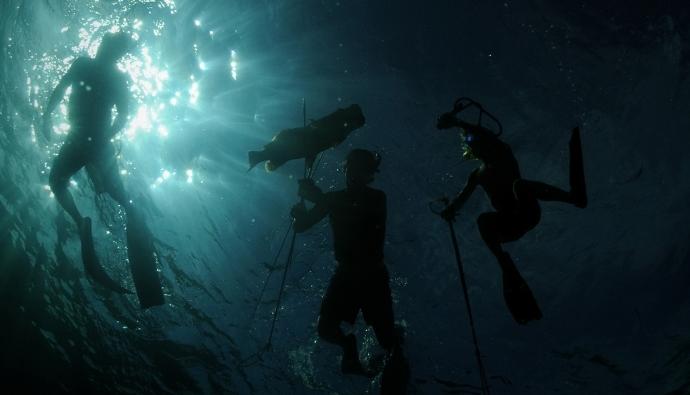 There is a clear divide between those who hail from Florida and those from California regarding spearfishing.

With its warm water and abundance of fish, some say Florida is the best place to spearfish. At the same time, others claim that California, with its rocky coastlines and kelp forests, is the ideal destination.

The Different Types of Spearfishing in Florida and California

There are two main types of spearfishing: free-diving and scuba diving. Free-divers use snorkels and spears for hunting fish while holding their breath. On the other hand, scuba divers use air tanks for breathing underwater while they hunt with spears.

Both Florida and California have great spearfishing opportunities for free-divers and scuba divers. In Florida, spearfishers can find plenty of fish in the warm waters offshore. And in California, there are kelp forests full of fish close to the shore.

The Limitations to Spearfishing in Each State

Each state has its laws and regulations regarding spearfishing.

Here are some limitations while spearfishing in Florida:

Here are some limitations to spearfishing in California:

Shark Encounters in California and Florida

Due to the warmer water temperatures, Florida has more shark encounters than California.

This is what Cooper Baker, the owner of Florida Spear, a new apparel line said, “And it was pretty crazy seeing a hundred sharks in the water, you know, it’s kind of at the same time, a little scary, but it’s a cool experience.”

There have been more than double the amount of unprovoked shark attacks in Florida than in any other state. While spearfishing in Florida, it’s important to be aware of the risk of encountering a shark.

The best way to avoid a shark attack is to stay in groups, avoid being in the water at dawn and dusk, and wear bright swim clothing.

“There were four of us, and we kind of learned pretty quickly how important it was to work as a team and actually fighting off these sharks and really having to work for anything that you shoot to actually land the fish,” according to Cooper Baker’s experience.

If you encounter a shark while spearfishing, the best thing to do is get out of the water as quickly and calmly as possible to be safe.

As Cooper Baker said, “Once you get the of fish in your hands and you have like four people there, the sharks are normally keeping their distance. Unless they’re really fired up, which sometimes they are, and you just try to get everything out of the water as quickly as possible.”

Water Visibility in California and Florida

If you are spearfishing, you need to see the fish you are targeting. Water visibility is an important factor in deciding where to spearfish.

In general, Florida has better water visibility than California. The warm, clear waters offshore make it easy to see fish from a distance. And in shallower waters, the visibility is often 20 feet or more.

When the water is visible, you can spot a shark from a distance, which gives you time to get out of the water. But in California, the water visibility can be poor near the shore due to the kelp forests.

In these areas, the visibility is often 10 feet or less. This makes it harder to spot a shark until it is close by. So, if you are spearfishing in California, it is important to be extra cautious and stay close to shore.

In California, the water temperature is cooler than in Florida. But the water can be too cold to fish in during the winter months. Also, California has stronger tides and currents than Florida, making fishing difficult.

How to Get Started with Spearfishing in Florida or California

Spearfishing is a great way to get fresh seafood. But before you go out and start spearfishing, there are a few things you need to do.

Get A Fishing License

This is probably the most important thing you need before you start spearfishing. In Florida, all residents and non-residents must have a valid fishing license to fish in saltwater.

Get the Right Gear

If you want to be successful at spearfishing, you should have the right gear. The type of gear you need will depend on the type of fish you are targeting and the fishing area. You will need a spearfishing gun, wetsuit, fins, mask, and snorkel. You can find all of this gear at a local dive shop or online.

Find a Good Spot to Spearfish

Getting a good spot to spearfish can be difficult. But it is worth it to spend some time looking for a good spot. In Florida, the best place to spearfish is offshore. There are many reefs and shipwrecks that are home to a variety of fish.

In California, the best place to spearfish is in the kelp forests. These areas are full of fish, although the water visibility is often poor. As Cooper Baker said, “And I think one of the things was the visibility wasn’t nearly as good in California most of the time.”

One of the most important things to remember when spearfishing is to be safe by ensuring that you always check the regulations before you go out spearfishing. And always be aware of your surroundings. If you see a shark, get out of the water.

Cooper Baker says, “You can just get in the boat and let them calm down a little bit and then get back in.”

Based on the above information, it seems clear that Florida has the edge over California regarding spearfishing. Florida’s warm water and abundant marine life make it a prime destination for this popular sport.

California’s cold water and lack of fish populations make it less ideal. Also, spearfishing in Florida is more accessible and less regulated than in California So if you’re looking to get the most out of your spearfishing experience, Florida is the place to be.

The water is warmer and has better visibility. But California does have its benefits, such as being less crowded and having a variety of different fishing spots.

Therefore, you will have a great time whether you choose to spearfish in Florida or California. Just be sure to follow the state regulations and stay safe while fishing.