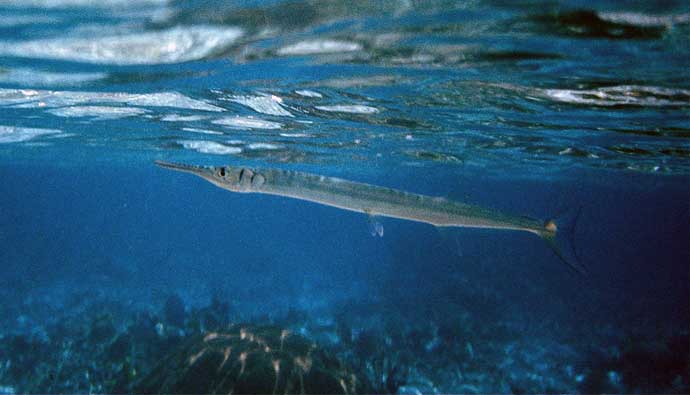 Want to fish for needlefish but don’t know where to start? The houndfish, also known as the Giant Mexican Needlefish is a monster and fun to catch!

It can be found worldwide in both tropical and warm temperate waters.

Known as one of the most dispersed species of needlefish. The houndfish is common in the western Atlantic in waters that touch New Jersey and go up to the Caribbean and Brazil. It can grow up to 2 to 5 feet in length and is also known as crocodile needlefish and hound needlefish.

Compared to other fish in its species, the hound fish has a short and stout beak. It can be found in small groups swimming near the surface of the water and will strike artificial lures. That is why most anglers use a rod and reel combo to catch it.

Houndfish are pelagic which means that it can be found swimming over lagoons and reefs either in groups or alone. That’s where they feed on smaller fish and lay their eggs which attach to underwater objects via tendrils.

Yet, be careful when you are fishing for this species of needlefish. It is feared by anglers because its sharp beak can puncture skin and muscle especially when it leaps out of the water trying to escape your line!

Big needlefish are usually caught by anglers who are reeling other fish such as black bream which means they can be lured with almost any bait. It has a long snout that is full of sharp teeth that is pretty useful for catching small baitfish. But, even if they take lures, they are difficult to hook because of their small beaks.

Since the houndfish is a carnivore, use strips of squid and prawn on the hook or if you want to use artificial, choose ones that are made of soft plastic. This big needlefish is also quite acrobatic especially when it is hooked and will leap straight into the air to try and escape. Thus, rather than using heavy lures that can rebound on your head when the fish jumps, use a lighter one. This will get the job done and reduce the chances of injury.

Like most needlefish mating season for houndfish falls between the months of April and May. During this time, the males compete for females. You can find quite a large needlefish in shallow waters while it is spawning.

Despite its ferocious look, the houndfish is quite delicious once it is cooked. Here is a needlefish recipe that you can try with this fish:

Q: What do needlefish eat?

A: Needlefish feed on smaller fish as well as shrimp, cephalopods, crustaceans, plankton, silversides, and killifishes. The freshwater variety feeds on insects, frogs, and tadpoles.

Q: Can you eat needlefish?

A: Even though needlefish such as the houndfish has many small bones, they are quite good to eat.

A: Yes. This needlefish has a particularly strong beak and jaw which can penetrate flesh and bone like butter when it leaps out of the water.

Q: How do you catch small needlefish?

A: Use a small treble hook and small pieces of squid or fish as bait which won’t slip off. Make sure the hook is also small enough to fit in the needlefish’s mouth. Cast the hook in front of the fish’s face and work it to entice a bite. Allow the fish time to swallow and then reel it in.

Houndfish may be difficult to catch, but that is what makes them worthwhile sport fish.

Be careful when you go fishing for it. It has a sharp beak that can run you through when it leaps out of the water.

If you have some fishing tips, tricks and strategies that worked for you share in the comments below and do share this guide if you liked it.