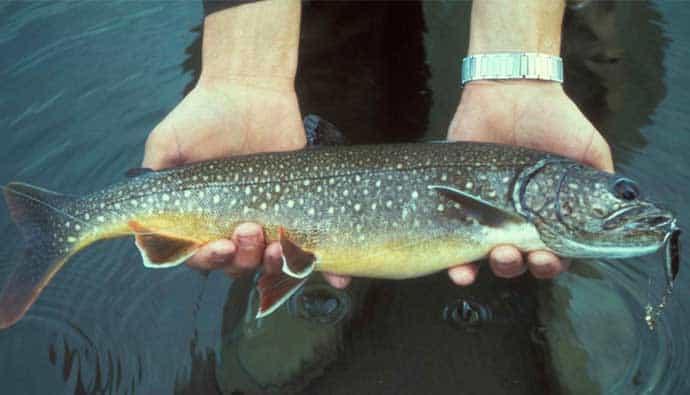 If you’re looking for some lake trout fishing tips for this large and beautiful fish, then you’re in luck!

Also known as laker, Mackinaw, charr, salmon trout, landlocked salmon, and grey trout, the lake trout is considered to be the largest member of the Salmonidae family.

This fish species is not exactly a trout, but charr, which makes it a close cousin of the brook trout. Local fishermen also call it the fat lake trout because of its oily flesh.

In this guide, we’ll share facts about the trout, tips on how to catch, and even how to cook it!

Lakers have the same elongated bodies as the trout and salmon, but they grow larger than other charr species. The tail is forked, and it has white leading edges across its lower fins and light-colored spots on a dark background. The body is usually brownish or grayish in color, but the coloration depends on the season.

Lake trout is not overly threatened by overfishing and predation, but its numbers have reduced in commercial lakes.

How to Catch Mackinaw Fish

Catching lake trout can be tricky if you don’t have the proper gear. Landlocked salmon can weigh over 35 pounds, so you need a heavy rod to reel them in.

Plus, use a thin line and an open-faced spinning reel and make sure that the reel is facing the correct direction. Choose lures that look like local baitfish to fool the trout into taking a bite. Make sure that they are small and weightless, and you should also use shiny metals or beads to make the bait look more enticing.

Some types of baits you can use:

Since grey trout are usually found in the deepest parts of lakes, you will need to use a depth finder to locate them. The depth they swim at depends on the time of the season you are fishing them in, which will be covered in a separate section.

Try jigging for trout in areas where they are abundant such as in a well-stocked lake. Drop your line complete with bait (artificial or live) down to the bottom of the lake and work your way up slowly. This way the trout will think the bait is a wounded fish and swim up to it as it ascends.

Troll for lake trout when they are scattered in different parts of the lake. You need to move around to find them to use your depth finder.

Use a bait caster or a spinning reel complete with a weighted line. Drag the hook without making it break the surface of the water to lure the fish. The key is to go slow.

Lake trout can be fished year-round during any season but the number you catch depends on where they are in a lake during certain times of the year and during different weather conditions.

When lake waters are at their warmest and the trout swim down almost to the bottom where the sunlight doesn’t penetrate. That is the time when catching lake trout can be tricky and frustrating since it can be difficult to figure out where the fish is and how you can reach a school with your line.

Make sure you always check your lake trout regulations in your state!

How to Clean Salmon Trout

How to Cook Charr

When you’ve finished learning how to fillet a trout, it’s time for you to savor your catch. Here’s how to cook you trout catch.

What do lake trout eat?

When do lake trout spawn?

In the autumn between September and December.

How big do lake trout get?

15 to 40-pound lake trout are not uncommon but the size depends on the lake and the season you are fishing in.