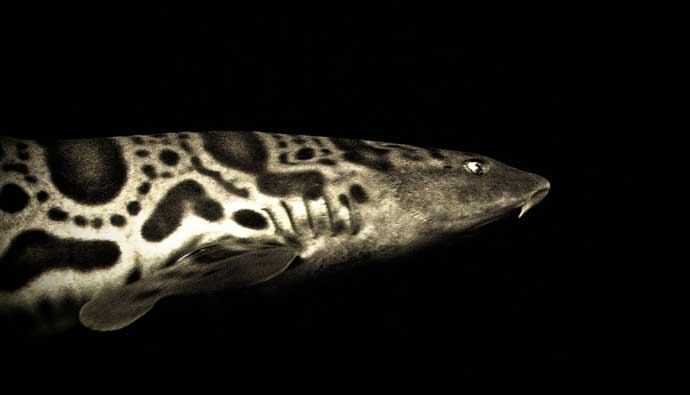 What Kind of Fish is the Leopard Shark?

The leopard shark is a member of the family Triakidae, which also includes the smoothhounds and the soupfin.

The is an elongated shark species covered in black saddles and large spots. Once in a while, you can find one with numerous small spots all over the sides.

Leopards have been taken from Samish Bay, Washington to Mazatlan, Mexico, including in the Gulf of California. They are abundant in the Pacific Ocean from Humboldt Bay, northern California, southwards. While we tend to think of leopards are nearshore fish – often hugging the shoreline in the surf — at least one was seen (from a manned submersible) in 515 feet of water.

Leopards live in a very wide range of habitats – mostly near shore by the ocean floor. Adults give birth to young ones (from spring to fall) in quiet bay and lagoons and tend to hang out over mud or among eelgrass beds. Older fish will also hang out in this habitat, but they also aggregate in kelp beds, or over sand or mud bottoms.

Leopard sharks are most active at night and while they tend to stay near the bottom during the day, they will rise well into the water column during the dark. These are highly migratory fish, they tend to move inshore during the spring, then leave in the fall. Some fish return to the same bay year after year.

There are several locations in southern California (North America) where large aggregations hang out for months at a time. Just what they are doing there is unclear, but at least some are giving birth and some are mating. Leopards live to at least 26 years old and exhibit slow growth. At least a few fish are mature at 7–10 years old and around 3 feet long.

Economic Importance Historically, there has been a medium-sized commercial fishery, both in the United States and Mexico, and there are a number of recreational anglers who really like to target them.

How to Catch Leopard Sharks

I’m going to start with a rod and reel that I’ve used many times. Small reels can work, but just know you’ll probably hook up on a stingray which is a powerful and strong swimmer. They’ll take your bait they just run which will pull a lot of line.

Reels tend to have enough power to deal with leopard sharks, but make sure they have enough line capacity. One reel I like is the Penn Pursuit 6000 and with 25 pound mono on it. It’s a good setup. It works well.

I’ve almost got spooled on this rod one time…I got really close, but it did the job just fine.

Honestly, lately, I’ve been enjoying bigger reels on my Shakespeare Ugly Stick Big Water. It’s a medium-heavy rod, that’s nine-feet long. It’s rated for 20 or 30-pound line and the reel that I have on it is a Penn Spinfisher 8500.

Also, I’ve got a 30-pound mono on it, it holds 300 yards of line and it’s got 25 pounds of drag. This is a really good rod and reel setup. You can cast out far and it’s got good power and this reel. will get it to get the job done.

Best of all, you’re highly unlikely to get spooled on this rig.

I like the spinning reels because they’re easy to cast and you can cast out far with them. They’re not troublesome. So this is my go-to rod right now for fishing leopard sharks. Plus this Ugly Stick is a two-piece rod that makes it easy to store.

When you’re storing your reels, don’t have your drag clamped all the way down…loosen it up. I always store my rods just tight enough to hold the line so it’s not just under compression while it’s in storage.

This is everything you need to make your rig for shore fishing for Leopard Sharks. Therefore, let’s start with the weights.

I use eight-ounce weights or ten-ounce weights depending on what the current is doing. You want something that’s going to grab the bottom well. I generally use a pyramid and go with a ten-ounce because most of the time the places where I’m fishing, there’s current and it’s pretty strong and you want to hold the bottom, but sometimes you can get away with using less weight.

Also, use a sliding sinker. I’ve used three different sizes of wire, 60, 80, and 135. I use sleeves to crimp the wire to the hook and swivel. Then I’m going to use a 150-pound test swivel from Berkley.

I prefer size eight hooks but in a bind, I’ll use sevens, but it’s not worth going smaller than sevens. I know some guys who recommend 5/0 octopus Yamakatsu hooks. Just remember to size your hook to your bait and the line to your target.

Also, you need to have some good pliers for cutting wire and for crimping the sleeves. Make sure you use a set of pliers or wire crimpers that are heavy duty. If you go out shark fishing, it’s best to just keep them in your tackle box.

Every once in awhile they’ll get rusty and tight. Just hit him with some, liquid wrench and then just work them out and they’ll start working smoothly again.

For line, a lot of fishermen recommend around 50-pound braided line that attaches to a strong leader.

Use 60-pound test AFW (American fishing wire). It’s a surf low nylon coated wire. You’ll want your leader to be about 20 inches. It’s best to cut off about 24 to give a bit of room to work with. 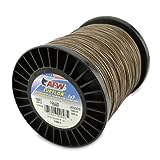 Grab some seven-strand Berkley Standard Sleeves, size A4. The first thing you’ll do is take one of these little sleeves and feed it onto the wire. Then take your 150-pound Berkley Swivel and put that through the eye of it.

Now what I have here is the swivel with the wire going through the sleeve, through the swivel, back up through this sleeve and then looped around. And there’s the tagging. You go through the three times. One, two, three. You see the tag in there. Also, use your notch in the pliers to crimp your sleeve.

Have a good connection there you’ve finished your shark leader.

Connecting Your Leader to Your Rod

Also, when you cast out make sure you don’t leave any slack in the line because you won’t feel your bite. You want a reel in the line until you feel the swivel hit and then you want to drag it back.

Reel back until you feel the swivel engage with this sinker slide, and then you’re going to drag it back a couple of feet to get your leader in nice and straight.

A tried and true way to catch a leopard shark is with squid. I’ve caught them on muscles as well and even sand crabs.

For a larger leopard shark, use a whole squid. Find the section of the squid that has the two fin-looking things and place your hook between those and out to the other side. Pull the hook all the way through.

Then I go through the body kind of at an angle aiming down, and then come back around and hook it making sure that the hook is exposed all the way. Keep everything tight and you’ll be ready to cast it out.

How to Store Your Rig

When you’re done fishing with this rig, you’ll want to make sure it’s good to go next time you want to use it. Rinse it off in some freshwater or even soak it in a bowl of freshwater for five minutes and then hang it up by the hook somewhere to dry. Then when you want to put it away, just wrap it in a circle and wrap the ends around a few times to keep it from unwinding.

Hence, it’s ready to go in a Ziploc bag or, whatever you want to store it in.

How to Fillet Leopard Shark

There’s not much to it. Therefore, catching a leopard shark using simpler rigs than this including just a hook to some braided line. That’s usually suitable for baby leopards. Therefore, if you want to take this seriously, it’s good to have a few of these metal rigs in your tackle box that are ready to go in case you lose one in the rocks.

To my knowledge, the leopard shark has a status of least concern, but be sure to check your local regulations to make sure.