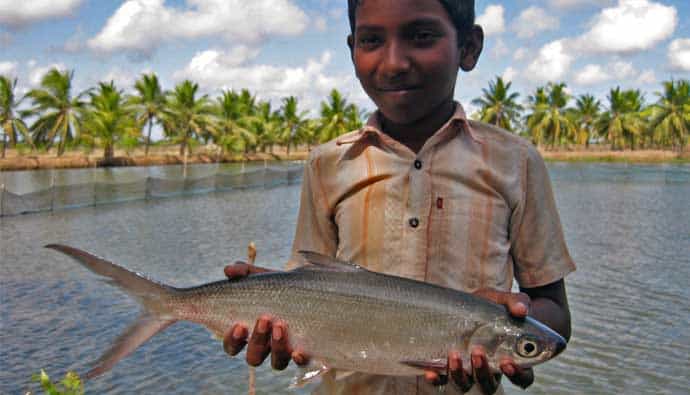 If you have a chance to venture out to Asia, especially the Philippines, then you should definitely go after some milkfish.

These fish fight just like a mullet or bonefish. You can take them on the fly or with bait. You’ll be able to catch them in ponds using simple food like bread.

A good eating food fish that has plenty of delicious recipes coming out of the Philippines and Indonesia.

It’s awa in Hawaii, ava in Tahiti, and bangus in the Philippines, where it is also commonly known as the national fish.

You can find this fish in the Indian and the Pacific Ocean ranging from South Africa to Hawaii and the Marquesas as well as all the way to the south of Australia.

Compared to other species, milkfish has an elongated body that is compressed and streamlined and which is olive green in color with silvery flanks and dark bordered fins. The caudal fin is forked. It usually feeds on algae, small invertebrates, and autotrophs and tends to school around coasts, islands, and coral reefs.

These fishes lay several million eggs and spawn in saltwater. The young milkfish called fries thenswim to waters where there’s more zooplankton and eggs of other fish.

Where to Find Milkfish

Milkfish chanos chanos are endothermic fish and are cultured in fresh, and marine brackish water but only in the tropical and subtropical Pacific and Indian oceans. The fish usually lives in tropical offshore marine waters around islands and continental shelves but have also been known to enter rivers and estuaries. In open water, the fish is easy to spot.

They are commonly farmed in their native range. In fact, they are one of the most important farmed fish species for human consumption in the world. The fry is raised in brackish ponds, sea cages, concrete tanks, or saline ponds.

You can also find them in small pods in waist-deep water right over algae patches with their tails out of the water as they feed on the bottom.

How to Catch Milkfish 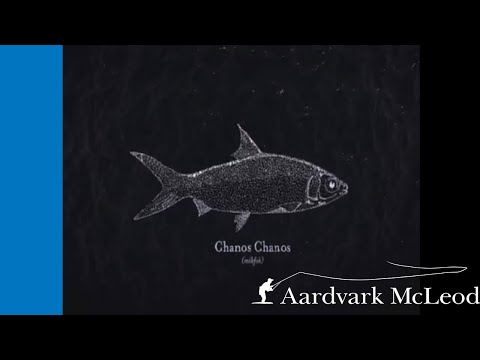 The awa awa fish or milkfish is popular for being a fierce fighter that does not tire at all. That’s because remarkably it does not build up lactic acid in its muscles so be prepared for a struggle that can stretch for hours.

The best way to catch them is via fly fishing which should involve a 9 or 12-weight rod that can give you sufficient pulling power and quick presentation. Accompany it with a matching saltwater reel that has smooth reliable drag, sufficient backing, a floating tropical line, and a 20 lbs tapered leader.

Since milkfish are not predatory, the fly you use will not represent anything that would make them give chase. The determination of your choice of fly is not by the area but by the behavior of the bangus while they feed.

Bangus or milkfish chanos chanos are present year-round because it spawns more than once a year. It breeds near clean, clear, warm, and shallow waters over sand and corals. They’re usually found in the Pacific and Indian oceans. Spawning is seasonal and dependent on the lunar cycle.

How to Cook Milkfish

Milkfish is common in Asian recipes because of its mild taste and tender meat. It’s an important food supply for in different parts of the world, especially in Southeast Asia and some Pacific Islands. The most popular recipes include topping for congee, pan fried, braised, and as fish balls. If you plan on cooking milkfish, here’s a recipe you can use.

Is milkfish good to eat?

Yes. It’s a common dish to eat in the Philippines. It’s often used for making fish cakes, and fish balls.

What is milkfish in the Philippines?

Milkfish is called bangus or sometimes bangos. It’s the main aquaculture by product in the area. It’s the second most popular seafood dish for Filipinos.

How long do bangus take to mature into adults?

Are milkfish saltwater or freshwater fishes?

This fish is primarily saltwater but can also be found in freshwater. However, they can only breed in saltwater.

Milkfish chanos chanos can be a bit difficult to fillet but it more than makes up for that for its taste and the excellent sport fishing it offers.