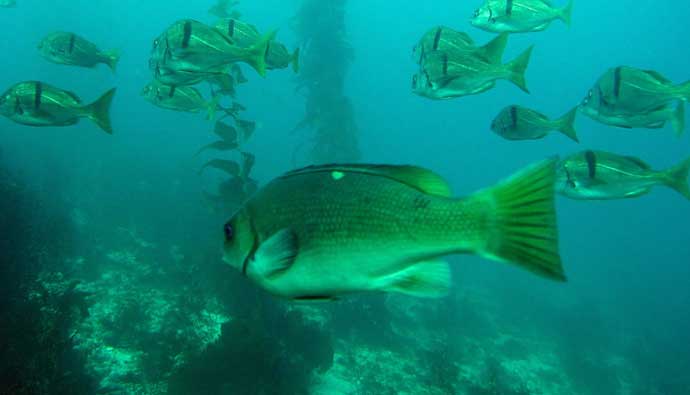 I’m here to tell you that opaleyes are not a trash fish! They get a bad wrap in the spearfishing community, but they can be fun to catch and when prepared right can even taste good.

They are also known as the rudderfish and are part of the Girella nigricans family.

There are over 18 species of this fish across the globe and two of them can be found in the waters off Mexico and Southern California.

Opal eyes have an oval, elongated and compressed body and they are olive green and gray-green in color. They also have two pale spots on their upper back below the mid-dorsal fin but these only appear on adults.

Many also have a white line across the snout and just below the eyes and their namesake is due to their bright blue/green eyes which look like opals. This fish is not an endangered species.

Opaleyes fish swim in large schools at mid-water depth or a couple of feet under the surface. They rarely swim near the surface and don’t usually dwell near the bottom either. If you want to fish at the correct depth, use long slip line floats as your preferred tackle. When it goes down as the fish bites, strike fast and prevent it from rushing into the kelp.

When it comes to opaleye tackle you cannot be too careful. Use a light line such as a fluorocarbon and small hooks that are a size 6 or smaller to catch and hook the opaleye. However, the older ones can be really difficult to catch. Attract them using chum with peas and you can attract a whole school that may have some larger ones in the group.

Chumming fish with peas is the best opaleye fishing tip you can get.

Keep frozen peas in a cooler with you to use as bait and don’t them it defrost so they remain firm. That way the fish will have to take it whole in its mouth to get it off the hook thus allowing it to penetrate the flesh.

Plus, make sure that the peas are not torn or damaged in any way. The opal eye fish is lightning fast and will remove the meaty part of the pea leaving the skin behind and your hook empty. Besides this, you can also use moss, ghost shrimp, pile worms, blood worms, small crabs, and mussels as bait with most preferable for most anglers.

The opaleye can be found year-round but the location can vary from season to season. If you are fishing during the spring and summer months, use peas as bait to attract last schools but use other baits in the cooler times of the year for better results.

The fish can be found in large schools within rocky areas that are abundant in algae but they do venture into estuaries. Young opaleye is pelagic and can be found near the surface alongside floating debris.

It’s funny, opaleyes are considered a trash fish in the spearfishing community here in Southern California. I won’t lie, it was the first fish I ever shot and I’m proud of it.

They are relatively easy to shoot, which is why I believe they aren’t targeted often…not much sport in it.

However, if you do take a few, when prepared the right way, they can taste good.

Here’s a video of my buddy KACA Life, who’s one of the best opaleye fishermen I know. In this video, he shows you how to clean an opaleye and even how to make sushi with them!

Since opaleye has a tough skin, it cooks well over charcoal. Here is how you can barbecue it:

Q: Where can opaleye be found?

A: Fish for opaleye in Mexican waters or along the west coast of Baja through the Sea of Cortez. They are found in large schools usually near rocky areas that have an abundance of algae they can nibble on.

Q: How large an opaleye get?

A: The maximum length an opaleye can reach is 66 cm or 26 inches.

A: The body is covered with round, thick and rough scales, and the pectoral and pelvic fins are usually short. Besides the caudal fin which is concave all of the fins are blunt and round. The fish has a small and blunt mouth and incisor teeth that are set horizontally in the mouth and have flat, 3-pointed tips.

Q: What is the color of the opaleye?

A: The color of the opaleye is gray-green or olive-green which transitions to a uniform dark brown when it is about to die.