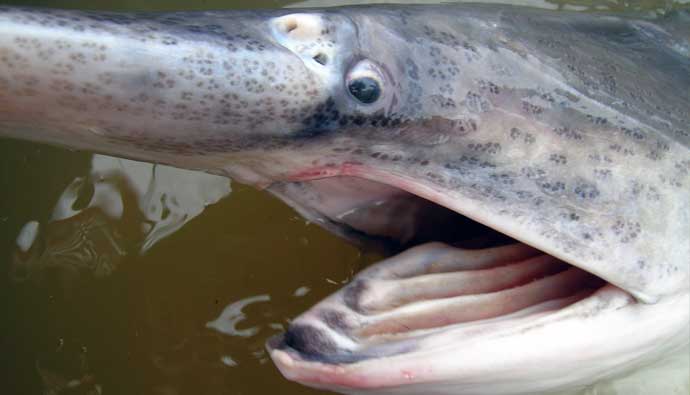 Paddlefish Polyodon spathula is an ancient fish that looks like something out of Jurassic Park.

American paddlefish are filter feeders, which means they filter out plankton for food. This poses a challenge when it comes to catching them since it’s hard to put plankton on a hook. That means we won’t be baiting our hooks and instead of waiting for them to vacuum up our treble on the bottom.

Depending on your state, the wildlife service will have different regulations for catching. Some states like Montana actually allow you to apply for a catch and keep tag if you want to eat one.

In this guide, we’ll break down how to do paddle fishing so you can catch this dinosaur.

Also known as the spoonbill fish, the paddlefish lives up to its name. It has an elongated paddle-like snout that makes up almost 1/3rd of its length, has a large mouth that lies beneath the head, and has no teeth.

The eyes are small and located just above the front edge of the mouth. The shark-like fish can be found in waters around Missouri, Mississippi, and the Osage rivers.

The rostrum of the paddlefish is covered with tens of thousands of sensory receptors and which it also uses to navigate underwater. The fish swims slowly through the water with its huge mouth open collecting small insects and crustaceans in their compact gill rakers.

Where to Catch American Paddlefish

As an extremely slow fish, American paddlefish prefer waters that have slow currents such as eddies that are created by natural sandbars but they are also common in open water near the surface. As levels rise in spring, this pointy-nosed fish moves upstream to gravel bars to spawn.

It prefers open and free-flowing habitats including backwaters for feeding. American paddlefish are also known to move in brackish water for spawning.

How to Catch American Paddlefish

As one of the largest freshwater fish in the US, the American paddlefish is quite exciting to catch. The general method for catching one of these monsters is to cast from shore and reel in quick while yanking the rod to hook them or by trolling in your boat until you snag one.

One of these fish can weigh almost 200 pounds so it’s important to come prepared with the right gear. The last thing you want is to use too light of gear and have it break off leaving a trail of fishing line and a hook in the fish.

Use a strong braid line so that the chances of it breaking off are minimal. Depending on the structure you’re fishing if you use braid to make sure there aren’t too many rocks or branches that would be abrasive to the line. 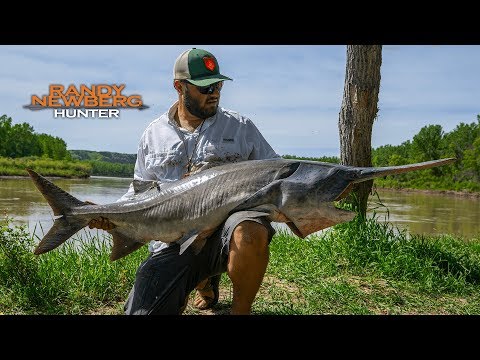 Since it can grow to almost 200 pounds, you’ll need gear that can prove strong enough to reel it in. Since you’ll want to cover a lot of distance, opt for a longer rod around ten feet to provide the necessary leverage to huck your weight far out from the shoreline. A medium-heavy rod should be fine for an American paddlefish.

Plus, make sure that the rod is spooled with a braided line that can withstand a 60-80 lb test. Since you’re trying to hook them, use a sturdy number 8 to 14 treble hook. If you don’t have a catch and keep tag, then make sure to debarb your treble hook so you can release the fish easier.

In order to get your hook out far, while keeping it from getting snagged by debris, it’s important to tie a leader from the base of the treble hook down to a lead weight. You can do this with any knot you feel comfortable tying, may it be a uni knot, Albright knot, or any knot at all, just make sure you give it enough wraps so that the line doesn’t slip up the hook.

Generally, it’s a good idea to use a weaker line in case the weight gets stuck, so you won’t lose your hook.

Choose a stiff 6 to 7 feet long rod with a conventional reel and the best trolling lures in your bag. Your rig will be similar to how it’s done from the shore since you’ll be snagging one of these American paddlefish while cruising through the water.

Drop your weight and treble to near the bottom and start trolling.

When you hook an American paddlefish, the line should jerk without slipping. If that happens to stand with your knees apart and pull as hard as you can. If the fish is hooked on the jaw, reeling it in won’t be a problem but if you hooked it in the tail, you will have to struggle for a while.

The ideal time to fish for paddlefish is during the spawning run which starts in the beginning of March and runs all the way to late April. Check fishing regulations before heading out and make sure you have a permit as well.

Paddlefish is a tastier version of catfish but make sure that you remove the red meat that is on the outer layer.

What states are paddlefish found?

Paddlefish are found in Mississippi River Basin, Montana, Missouri, and the Osage rivers.

What do paddlefish eat?

This pointy-nosed fish is toothless but rather than feeding on large prey it targets tiny aquatic animals. It swims with its mouth open in the water using comb-like structures called gill rakers to filter zooplankton.

Can paddlefish hurt you?

Paddlefish remind me of a basking shark. They are large yet gentile creatures that live their lives filtering the water for zooplankton. Paddlefish can hurt you if you’re trying to handle them improperly and you get thrashed around by it. Similar to a sturgeon, the big ones need to be handled with care and preferably in the water unless you plan to keep the paddlefish.

When going after paddlefish, you’re really not trying to trick the fish into taking one of your baits. You’re just trying to get the hook in the right place at the right time. Hopefully, you can snag the paddlefish in the mouth, but if for whatever reason you accidentally snag the tail, you’re going to be in for a longer fight.

It’s nice to see that the wildlife service here in North America has been able to keep these gentle creatures thriving. It’s sad to see the populations of the Chinese paddlefish diminish and go extinct.

If you think the paddlefish we have here are large, you should look into their Chinese relative. Those fishes were on another level of pounds.

Unfortunately, the paddlefish here at home have been seeing a decline in their historic range. A big downside here at home is that poachers and other criminals are illegally killing these paddlefish for their eggs to be sold as caviar. Killing paddlefish and not using their entire body for consumption is sad.

We hope you support your local wildlife service and do your part to keep the paddlefish around. Report any illegal activity and buy tags to help fund the activities to keep their populations healthy.