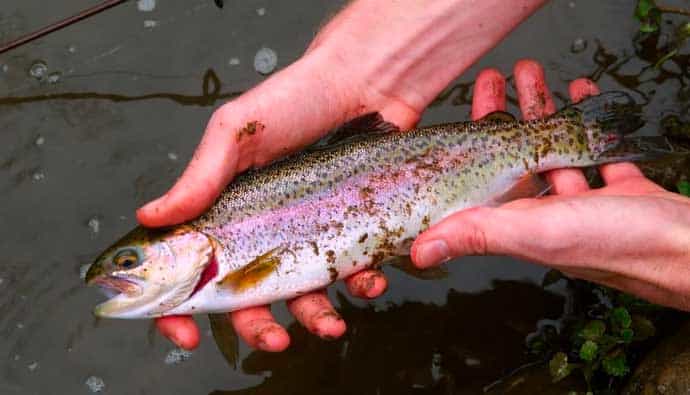 Do you want to catch rainbow trout but don’t know how to? Even though it is considered to be one of the most widely distributed freshwater fish out there, it is endemic to western North America.

Sea-run trout species are called steelheads. It can be found both in freshwater lakes and it is a favorite among seasoned and novice anglers. However, the freshwater variety is not as prevalent in lakes as the anadromous variety – trout that grow to adult size in the sea but use freshwater sources as breeding grounds.

The freshwater rainbow trout has a streamlined body and like its namesake, the body has multi-colored shad and they have a pinkish band running the length of their body. The underside of the fish is silvery which fades to a gorgeous pearl white.

The tail, back, and fins are peppered with small, black spots as well. The anadromous steelheads are usually more streamlined and the adults have a brassy color.

A species of the salmonid, the average freshwater rainbow trout is tolerant of moderate temperatures, which means it is prevalent in large bodies of water across the globe. That is one of the main reasons why anglers love it. It is native to the Pacific Coast of North America, the eastern coast of Asia, and the Pacific Ocean.

If you want to understand how to catch rainbow trout, you need to understand their diet first which varies. This fish is a carnivore and usually feeds on insects, small crayfish, salamanders and even smaller fish. However, a large part of their diet includes stoneflies, caddisflies and mayflies along with their larvae.

Since they have been introduced so widely, rainbow trout are not considered to be an endangered species of fish. In fact, some communities see them as pests, especially in non-native areas. In other words, far from being threatened with overfishing, these fish are easy to find.

As mentioned before, rainbow trout can be found in almost all large lakes and rivers. However, they can also be found in small streams. The fish is quite active in waters where temperatures do not exceed 40 to 50°F.

How to Catch Rainbow Trout

The angling method for fishing for rainbow trout differs depending on the location of the fish. For instance, if you prefer to look for them in rivers and streams, you should use wobbling spoons, weighted spinners, streamer flies, salmon eggs and Muddlers Minnows as bait. You can either fish from the shore or take a boat out on the lake.

Rods and reels used to catch this sport fish have come a long way. Today, most anglers prefer to use rods that don’t weigh more than 3 kg with a 1000 or 2500 reel. The material of the rod you use will also affect your fishing experience. If you are a novice, nano, graphite, or carbon fiber rods are the way to go.

The type and color of lure you use should depend on the type of trout you are fishing for, the light condition and the food it prefers. For example, when you are fishing in clear water, using a lure that is white, red or chartreuse in color can provide the best contrast under any almost any light. When the light condition is low, using reflective material such as tinsel can work just as well.

There are a number of readymade trout lures you can use as well. This includes the ever-popular trout spinner lure that entices the fish by flashing and vibrating on the surface of the water. You can also use scented or unscented trout worms to lure the fish into getting hooked or trout jigs which come in a variety of shapes and sizes to attract the pickiest of trout.

There are also a number of different lines available that can suit your preferences. A braided line, for instance, is best if you are using a medium-sized spinning tackle. Most experienced anglers use it as the mainline on their spinning reel along with a fluoro leader. Since the braid does not stretch as such it cuts through the water fast making instant strikes possible. Plus, it also allows you to set a hook quickly which can increase your catch rate.

Carry a few different types of salmon eggs as bait rather than a single type. This can improve your chances of increasing your catch rate.

If you are fishing in cold water make sure that the slip shot is about 6 inches from the hook. This way the bait will remain at the bottom where the rainbow trout prefers to feed.

Trout prefer to feed at first light and just before nightfall. This is especially true during the summer since the sun can be too hot for them to come close to the surface of the water. In other words, target the first 3 hours in the early morning and fish till the evening for the best results.

If you are fishing on a lake, cast your line in areas where streams meet it. Rainbow trout prefer to congregate in such areas.

Catching in All Four Seasons

Rainbow trout cruise the shore during the spring to spawn so you can find large ones right near your fishing spot. Use black marabou jigs to catch them. The smallest of waves can get that lure moving to attract the fish.

During the summer this fish remains deep in the water to avoid the harsh sunlight. Make sure to use lures and baits that can go straight to the bottom.

In the fall, rainbow trout can be caught throughout water columns especially when temperatures drop and the surface of the water cools down. Stick to vibrantly colorful flies as bait and give the line a small jerk periodically to make the bait move and look more enticing to the fish.

Rainbow trout can be found in cruising at the bottom of a body of water that is less than 5 feet deep. Any deeper and you can find them swimming in the middle. If you are ice fishing, use a light jig that won’t sink straight down to the bottom and pass the fish. It will float down slowly and gently to entice the fish into getting hooked.

A: Since this fish is predatory it goes after smaller fish, nightcrawlers, and insects such as grasshoppers. Using live bait or bait that looks like their favorite meal can help you catch them.

Q: Should I use a lure or bait to catch the fish?

A: If you prefer to fish along the shore in shallow water, use artificial or live bait to attract the trout but only if you know where they are in the river or lake. If you prefer to fish in deep water and don’t have a boat, use a lure. It can land further across the water than bait can because of its weight and make.

Q: When is the best time to fish for rainbow trout?

A: The answer depends on the season but most states have fisheries that are open during the offseason and some are also open year-round.

A: Rainbow trout is known for its flaky meat. It has a mild flavor and incredibly smooth and delicate texture that makes it melt in the mouth.

Whether you are fishing for rainbow trout in lakes or streams, a poor setup will not help you attract the fish much less hook it. As a novice or even a veteran, to increase your catch rate, try worms as bait. These don’t slip off the hook easily, they are very enticing to trout, they can be stored easily and their retail price is quite affordable compared to other bait types.

Use a spin rod that is about 10 feet in length and is not more than 8 pounds heavy for fast strikes and to fight trout. Plus, use a high-end reel that has approximately 6 ball bearings and which can accommodate about 150 yards when it comes to the line.

Fishing for rainbow trout can be incredibly rewarding whether you are fishing for sport or to cook. It’s quite healthy for you as well. A 3-ounce serving, for instance, holds 20 grams of protein in just 143 calories. This incredible fish is a delight for both seasoned anglers and novice fishermen who wish to improve their skills.