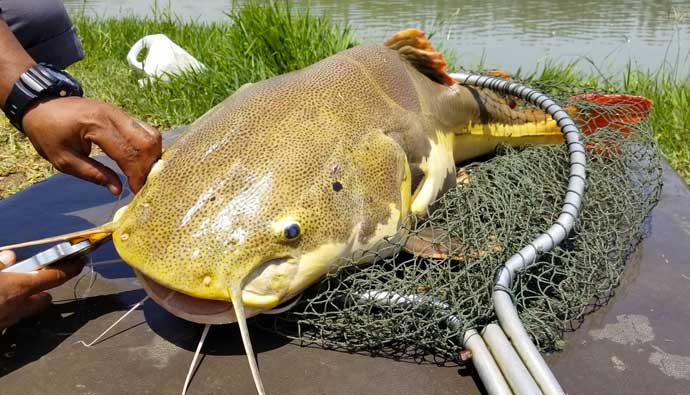 After watching Jeremy Wade catch a Red Tail Catfish on an episode of River Monsters, I knew I had to catch one!

The journey took me to Bangkok, Thailand, where I was lead by a guide to catch these magnificent creatures.

This fish is a hungry monster and will eat nearly anything. In this guide, we’ll break down facts of the redtail, how to catch, and why you shouldn’t try to keep these as pets in aquariums (it’s more common than you think).

Redtail catfish grow incredibly fast and are considered to be one of the most attractive members of the catfish family. It can be found in freshwater sources such as rivers, lakes and streams and all across the Amazon as well as large water sources in South America. Since it gets huge fast and is also quite aggressive, it is unsuitable as an aquarium fish. However, this has not stopped pet stores from selling the fish.

This fish is not considered to be an endangered species. It can grow to about 4 to 6 feet long and is dark gray or brown in color. However, despite their intimidating whiskered looks, redtail catfish teeth are non-existent.

Where Can You Find Them?

The redtail catfish has few habitat limitations. In other words, it can live in both acidic or black water as well as alkaline highland rivers. These also include tributary streams.

Known for the aggressive fight it puts up when it is hooked, this fish does an initial run and heads for a tangle of logs or submerged debris that it can tangle the line in. The bright coloration and unique markings make the fish easy to spot in murky water and its voracious appetite makes it an easy target as well.

How to Catch Redtail Catfish

When it comes to redtail catfish tackle, you cannot go wrong with the heavier variety such as the Peacock Bass. The fish has a huge mouth and since it does not have teeth, it will have no problem swallowing it and getting stuck in the process. Make sure that you use a wire leader so that the fish does not chew through the line and a braided line for hook sets. A heavy leader will also prevent the fish from trying to escape under submerged logs.

Best fishing lures for this catfish usually involve soaking live bait at the bottom. The catfish usually picks at bait first before gulping it down and taking off and it does have a pronounced bite. Hooks can snag on and hold onto their rubbery mouths pretty well.

Use a Baitholder Rig

Below is a similar type of bait holder we used (not including the hooks). Days old bread would be tightly packed around this metal coil with the hooks embedded. Nearly without fail, the red tail and other types of catfish would be caught…sometimes on the first cast.

If you’re in the Amazon, some good baits for catfish include chunks of fish that it normally hunts. This includes piranha as well as small wolf fish or traira besides other baitfish.

Traira stays on the hook pretty well. However, if the bait is being eaten by piranha before the catfish can get to it, you are in too shallow. Plus use a circle hook to prevent gut hooking and fresh bait rather than old bait to lure the catfish. If you want to catch the really big ones, fish in the Amazon.

Redtail catfish are available in freshwater sources throughout the year but to get a catch fast, take a boat out in the morning when the water is warm enough to lure the fish out of crevices. The catfish can feed anywhere at any time of the day but it seems to prefer midday, especially around stones that are exposed by natural springs.

Contrary to popular belief, catfish don’t sting and you cannot cut yourself on large ones. Once the fish reaches about 2 to 3 pounds, the spines are dull and the chances of being sliced are reduced significantly. However, smaller ones can get you when you release them since their spines are generally sharper.

When you catch a big cat, scoop it up with a dip net and use lip grips to handle it when the picture is being taken and during the live release. Whatever you do, do not stick your hand into that huge and gaping mouth. You can cut your hand up pretty badly.

If you catch a medium size catfish hold it from the top by placing your hand directly under the pectoral and dorsal spines and make sure that the area between the thumb and forefinger is behind the dorsal spine. Use a lip grip to release it so it doesn’t get hurt.

Now that you’ve caught a few, should you keep one as a pet when you return home?

Red tail cats shouldn’t be bought and kept as pets unless you know what you’re doing. These fish grow huge quickly and will outgrow almost all indoor aquariums.

If you’re thinking, that’s ok, they will grow to the size of their tank. This is not 100% correct. Their external skeleton might slow down growth, but their internal organs will continue growing and put stress on the fish until it dies.

Then why do pet stores sell them? Good question, they probably shouldn’t, but if there is demand, they’ll do their business duties to fill it…even if it’s not good for the fish.

If you are dead set on buying one, please have at least a 1000-gallon tank or pond for it to live in. If you buy it in a tank too small…don’t release it into the wild if it’s not native there…they eat everything and could kill a large portion of the native fish.

Q: How big of a tank do you need for a red tail catfish?

A: Redtails can grow an inch in size every week.

A: Yes, and they stop feeding when they are shedding their skin.

This is an aggressive fighter than can grow to a massive size. This fish is worth spending a day out on the boat for.

Bread is a great bait to use, but they aren’t picky. If you want to catch them easily, head to Bangkok. If you want more of a challenge, try to find them in the Amazon.