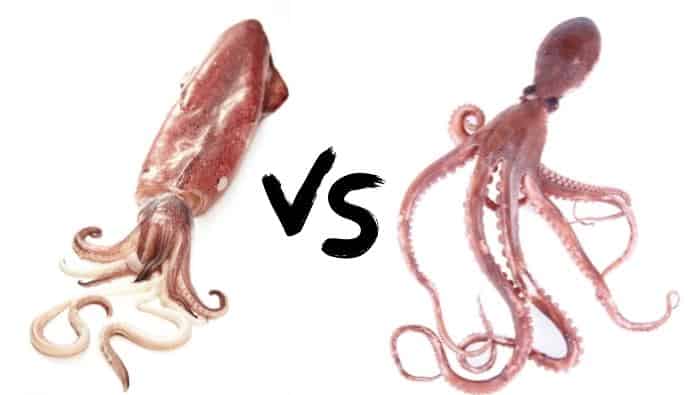 If you were to ask someone on the street what the difference is between a squid and an octopus, you would probably get a lot of blank stares in return.

Most people know that they are both sea creatures, but there is not much general knowledge about these creatures.

The squid and octopus are cephalopods, a group of marine mollusks animals including cuttlefish and nautilus. Cephalopods are characterized by their well-developed heads, prominent eyes, and tentacles.

Though they share these common features, there are still some key distinctions that separate octopuses and squid. So, what sets these creatures apart? Read on to find out.

Squid and octopus may look similar at first glance, but they are two very different creatures. They both dwell in the ocean depths and look like they could be related, however, these two animals are quite different.

Let’s look at the key ways in which squid and octopuses differ from each other.

Squids and Octopuses live in different habitats. Giant squid live in open water, often near the coast. They live in the open ocean and deep ocean because they travel in schools or solitary lives.

Which means they are often found in groups. On the other hand, octopuses live on the ocean floor.

They live in reefs, under rocks, and in crevices. Octopus is often found in coral reefs. They can easily find food and places to hide from predators.

Squids are carnivorous predators. They eat small fish, shrimp, and other squids. Octopuses are also carnivores, but they prefer to eat bottom-dwelling crustaceans like crabs, lobsters, and other shellfish.

The octopus catches its prey with its eight arms and inject paralyzing venom, while the squid uses its long tentacles with sucker rings to grab prey and bring it to their mouths.

Squid will often hunt in groups, using their tentacles with sucker rings to herd prey into their mouths. The squid will then either tear the prey apart with its beak or drill a hole through the shell of crustaceans to get to the softer flesh inside.

Octopuses tend to be solitary creatures. They will stalk their prey on the ocean floor and then attack by pouncing on it and pulling it into their dens with their arms. The octopus injects paralyzing venom into its prey before eating.

Also, squids and octopuses evolved a mechanism to protect themselves. Squids have tough beaks and ink sacs that they can use to deter predators. The ink sacs release a dark cloud of ink that can obscure the squid’s escape.

Octopuses have poison in their saliva to paralyze prey, but they can also use it as a defense against predators.

There are some obvious physical differences when looking at a squid and an octopus side by side. Squids have a long, tubular body with eight arms and two specialized tentacles used to catch fish. The octopus has a shorter, compact body with eight flexible arms and no octopus tentacles.

The squid also has a sharp beak made of chitin, which it uses to tear apart its prey. The octopus has no internal skeleton and hence has a soft body that can squeeze through tight spaces.

The octopus also has chromatophores in its skin, which it uses to change colors and camouflage itself.

A squid has a triangular head and two fins that runs along its entire body, unlike octopuses that have a round head and no fins except one specie called the Dumbo octopus that has fins.

One of the biggest differences between octopus and squid is their appendages. Squid have eight arms and two tentacles, while octopuses have eight long arms and no tentacles.

The male octopuses transfer sperm using a specialized arm called a hectocotylus. Once the female squid lays eggs and attaches them to a hard surface using a sticky thread, they form a beautiful decorative string and look like a work of art. The female octopus then guards her eggs until they hatch.

The squid mate in larger groups, and the male will often mate with more than one female. When a male and female squid meet, they will wrap their arms around each other and spin around in a mating dance. Squids lay their eggs in a safe place and then abandon them.

The larger squid found in the deep ocean can live up to 15 years. Though most adult octopuses, male octopus, and squid die soon after mating, the females often live to take care of their eggs.

Squid and octopuses have very different senses. Squid have excellent eyesight and can see in bright light and dark water. They also have a light-sensitive organ on their long tentacles to detect movement.

Octopuses, on the other hand, have very poor eyesight. They rely on their sense of touch to find food and mates. Octopuses also have a perfect sense of taste.

An average squid can grow to be very large, with some squid species reaching up to 60 feet in length. At the same time, you can also find a giant squid reaching up to 66feet. The smallest squid is the pygmy squid, which only grows about an inch long.

The largest octopus is the giant pacific octopus, which can weigh up to 600 pounds and have an arm span of up to 30 feet.

But normally, octopuses range from 12-36 inches and weigh 6.6 -22 lbs. The smallest octopus is the Californian octopus, which only grows about an inch long.

Is an octopus and a squid the same thing?

Is calamari a squid or octopus?

Which is better between octopus and squid?

There is a big difference in their sizes. Squid can grow to be very large, with some species reaching up to 20 m in length. On the other hand, the octopuses are much smaller, with the largest species only reaching up to 5 m in length.

Although both octopus and squid are marine creatures with some similarities, there are also many differences between them. Squid are generally larger than octopuses and have a harder shell.

The octopus is more intelligent than squid and can change its appearance to blend in with its surroundings. Both squid and octopus are delicious, but many people believe that the octopus is the tastier of the two.

So, when it comes to squid vs. octopus, which is better? It depends on what you’re looking for. Squid is the way to go if you want something bigger and has a harder shell.

But if you’re looking for something more intelligent and has a better flavor, octopus is the better choice.