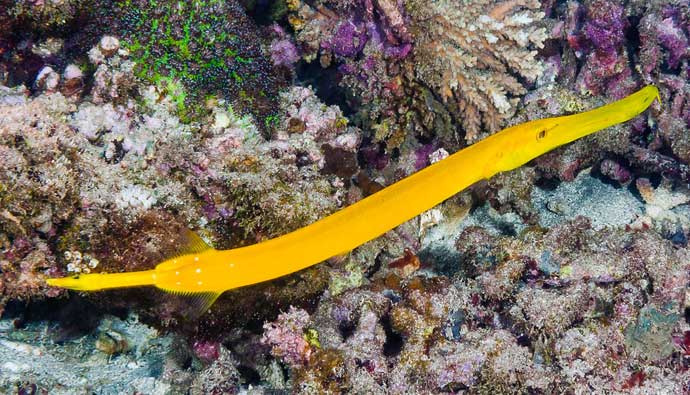 If all you know about the trumpet fish is that it is a long skinny fish, you have come to the right place, angler! Find out how you can catch it and reel it in without much fuss.

There are 3 species of trumpet fish or trumpetfish. They are found in tropical waters across the globe with 2 species in the Atlantic and one in the Indo-Pacific.

The fish is carnivorous and stalks its prey by hovering motionless a couple of inches above the substrate and draws closer inch by inch. Once it is close enough it darts in and expands its tube-like jaws in quick succession to suck in its prey. It usually feeds on smaller reef fish and crustaceans.

It’s important to note that the trumpetfish is different than the cornetfish. Although they are both long skinny fish, it’s easy to tell them apart by their tails. The trumpetfish has a rounder fan-shaped tail whereas the cornet fish has a more pointed “T” shape.

This long and skinny ocean fish inhabits seagrass beds and coral reefs in shallow waters that lie in the 7 to 82 feet range in both back and fore reef zones.

In reefs, the fish can be found around areas that have several vertical structures. This includes sea whips, sponges and sea fans which it uses to camouflage itself.

How to Catch Trumpet Fish

Since this skinny fish prefers to remain in the shallows, the best way to catch it is via shore fishing. They are especially abundant from shore in Hawaii.

Make sure you have a 7 to 9-foot rod with a 15lb test line and you can use both live and dead bait such as white squid. Cut that into triangles of different sizes and whip it through the water.

You can buy bait and lures from several stores you will find near the shore so you don’t have to catch your own. Show up with your fishing gear and start angling.

Trumpet fish can be found year-round but the best time to catch them is at sunrise or sunset. If you are fishing at some other time then coordinate your efforts with the tides according to the area you are in. Moving tides give the best results no matter where you are fishing in the world.

How to Clean Trumpetfish

How to Cook Trumpet Fish 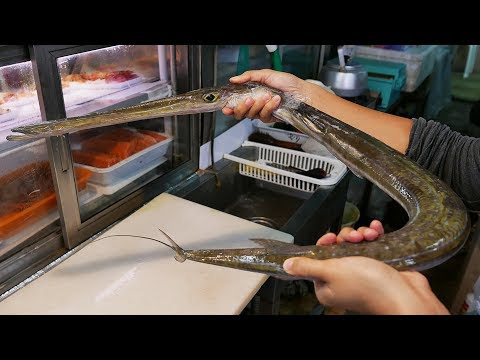 While trumpet fish is sold in some markets as table fare it is not a common food fish. Most people eat it raw as sashimi using the aforementioned filleting method.

Q: Why is trumpet fish confused with cornetfish?

Q: What do trumpet fish eat?

A: As carnivorous reef fish, this skinny and long fish hides in plain sight preying on smaller reef fish and crustaceans.

Q: What is the coloration of the trumpet fish?

A: Trumpet fish can be bright yellow in color but some are darker. They are also found in shades of mottled reddish-brown and green and can also change their color. This proves helpful when they are hanging motionless in the water to fool prey into coming closer.

The best place to fish for trumpet fish is in Hawaii where it is called ‘nunu’ and you can find plenty of bait in the stores along the shorelines.