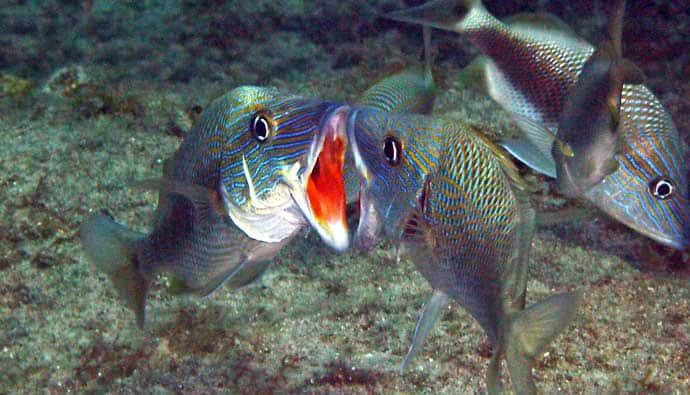 Confused about which types of grunt fish you should target?

Use this guide to help you understand the different types and how to catch them.

There are over 100 different types of grunt fish (including pig fish grunts and the white grunt) each with its own distinct colors and some even have different features. Yet, each makes grunting noises (thus the name) when they grind their pharyngeal teeth together.

That sound is magnifying a taut swim bladder. Some grunt fish are endangered so make sure you check your local regulations.

There are several types of grunt fish. In this article, we’ll discuss the white grunt, blue-striped grunt, and french grunt.

Location – White grunts can be found in plenty in and around reefs in continental shelf areas. This grunt has high commercial value since it can grow to quite large sizes and is a tasty table fish.

Identification – A white grunt has a silvery grey body that has yellow stripes running across it as well as blue stripes on its head. The scales create a checkered pattern and the inside of the mouth is red like other grunts.

Size – White grunts can grow to an impressive 14 inches and weigh 8 pounds. Some have been known to reach 25 inches as well.

White Grunt Fishing Tips – Rig small pieces of shrimp and cut up bait on a fish finder rig or use your preferred live bait rigs. White grunts are often used as live bait to attract other fish. Use them with enough tackle to prevent the line from getting snagged in the reefs or wrecks. Make sure the hook is large enough to accommodate the size.

Behavior – Like other grunts, white grunts remain in schools and travel in the shadows during the day. It reaches sexual maturity at about 10 inches and spawns in late spring and in the summer. Feeding habits are the same as the other grunts.

Location – blue-striped grunt fish can be caught from southern Florida right through to the Caribbean and to the West Indies. It can also be found along the Gulf of Mexico and along the coasts of south and Central America.

Identification – The blue-striped grunt looks different from other grunt species due to its color pattern. It has a yellow grunt body with blue horizontal stripes running across it. The tail and dorsal fins are dark and the others are yellow.

Size – blue-striped grunts usually grow up to a foot in length but it is known to grow up to 18 inches as well.

Habitat – This grunt drifts remains near reefs and especially near the deep edges. It also remains close to shore in shallow water that can be about 12 to 50 feet deep.

Blue-striped Grunt Fishing Tips – Like most grunts, this one is also sensitive to lines and will bite lightly so use lead weights that can carry the bait to the bottom. Make sure the line is running freely though.

Behavior – blue-striped grunts will often gather in medium-sized groups along reef beds in the daytime. It is startled easily. Adults will spend their time feeding at the bottom over grass beds on crustaceans and sometimes small fish.

Location – The French grunt can be caught in the Bahamas, the Caribbean, and Florida. It can also be found in the waters of South Carolina, the Gulf of Mexico, and in Brazil.

Identification – Its body is white to bluish or yellowish in color and has bright yellow stripes as well. The bottom of the head sports yellow spots and the fins are yellow.

Size – French grunts can grow up to 6 to 10 inches long but it has also been known to reach 12 inches.

Habitat – These grunts prefer shallow waters that are close to the shore. It can also be found deeper in coral reefs and coastlines.

French Grunt Fishing Tips – Use the lightest of tackle to catch French grunts and natural baits such as dead shrimp and cut up millet.

Behavior – French grunts feed at night and like most of its species, it swims in large schools that can go up to a thousand fish. This species looks for food such as crustaceans in grass beds and near reefs.

Here’s how to clean a grunt fish.

A white grunt is commercially popular due to its large size and delicious meat. Here is a recipe that pays homage to the white grunt fish’s unique flavor.

A: A white grunt has a mild flavor and the flesh is flaky and white. The taste is often compared to that of snapper or black bass and the skin sears quite well as well.

Q: What type of bait should be used to catch grunt?

A: Use live bait such as crustaceans, shrimp, and mullet to attract any type of grunt you find. Just be careful when looking for the fish. It is quite shy and will escape fast when disturbed.

Q: What type of reel is perfect for catching grunts?

A: Most anglers use both manual and electric reels to catch grunts over artificial and natural reefs.

Q: Where can I find grunts feeding?

A: Grunts are carnivores and usually feed on bottom-dwelling invertebrates. If you are fishing for them at night, look for the fish over reefs or sandy and muddy grass beds. The fish usually move away from the reefs when the sun rises and returns to it as it sets.

Q: Why are the grunt fish called ‘grunts?’

A: All grunt fish species make a distinctive grunting sound by grinding their pharyngeal teeth. That sound is amplified by a taut swim bladder. That is one of the reasons why this fish is often confused with the pigfish.

Q: Are grunts good to eat?

A: Yes! A Florida grunt fish favorite is Grits and Grunts.

The grunt fish should not be underestimated even if you do find it in large schools. It is quite quick to escape when it feels threatened.

Share tips and strategies you use to catch it in the comments below and share this guide if you liked it.