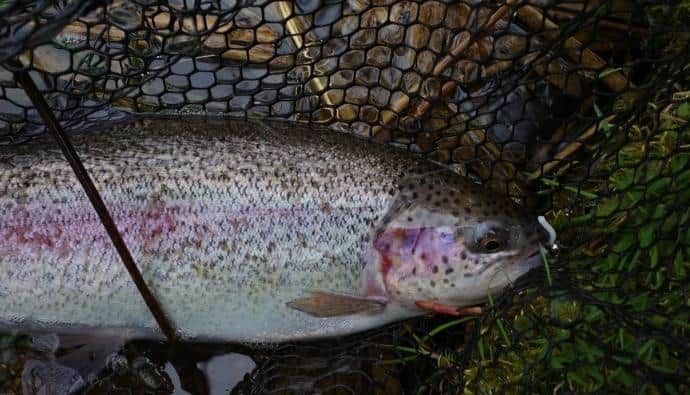 The trout is one of the most popular freshwater fish species in the world.

Trout fish are loved by many anglers for their acrobatic skills, sharp reflexes, and easy accessibility. They are also readily available throughout the year and make delicious food sources.

Trout is one of the most diverse fish species, having many subspecies. The most popular trout species is the rainbow trout, which is also referred to as steelhead.

In this article, we will discuss everything that you need to know about what rainbow trout eat.

What Do Rainbow Trout Eat?

Understanding the feeding pattern of a fish species is quite essential to make a big catch. This is because your bait needs to mirror the fish’s diet, in order to be effective.

Doing this is referred to as matching the hatch in fly fishing. It entails making sure that your fly or bait matches the common food source of the targeted fish.

For a fish species like rainbow trout, knowing what they eat is doubly important due to the existence of other species in the trout family.

There are over ten species of trout in existence, with the diet ranging from one fish to another. The diet of a trout species affects its taste and size.

For example, lake trout are some of the largest trout around, and they feed mainly on other fish species. A lake trout grows up to 80 lbs. The diet of a lake trout consists of smelt, white fish, lake herring, and more.

On the other hand, brook trout rarely grow beyond 10 lb, with most of them weighing below that. Brook trout feed mainly on worms, leeches, frogs, larvae, and smaller fish like minnows.

Brown trout eat any food that they find, ranging from small fish like minnows to small mammals like mice and young mink. Cutthroat trout feed mainly on fish eggs, as well as insects such as grasshoppers, crickets, and mayflies. Cutthroat trout also feed on ocean prey, as some of them live in saltwater.

Bull trout feed on whitefish, salmon, and other trout, while golden trout feed on midges, insect larvae, and caddisflies. It is clear from the diet of different species highlighted that larger trout feed on larger prey. This helps fly fishermen to use suitable bait, in terms of type and size when fishing for trout.

What Makes Up The Diet of Rainbow Trout?

Rainbow trout can be best described as omnivores. This is because they feed on insects, other fish, as well as aquatic vegetation.

Let us discuss some of the food sources that rainbow trout feed on.

We will highlight the life cycle of each insect below.

Stoneflies have a life cycle that is made up of only three stages. These stages are egg, nymph, and adult stages. This means that stoneflies do not undergo the pupa stages.

The larvae of a stonefly are typically large, ranging in size from half an inch to one inch and half. The nymph stage is the most pivotal stage of the life cycle of a stonefly. This is because this stage usually lasts up to two years sometimes.

Unlike stoneflies, caddisflies go through four stages in their life cycle. They transition from egg to larva to pupa before becoming adult flies.

Caddisfly larvae, without case, usually hide under rocks that are found in fast-moving streams. Caddisfly larvae that build cases secrete a form of silky substance which sticks to pebbles. This forms a protective shell for the caddisfly.

When it is time to pupate, these cased larvae seal off their cases and pupate inside the enclosed space. After they have developed, they chew the case and find their way to the surface before molting and completing their cycle as full adults.

The longest stage in the life cycle of a caddisfly is the larvae stage. This stage usually lasts as long as two years. There are flies that imitate both cased caddisfly and caseless caddisfly larvae.

Adult caddisflies can also be imitated using the elk hair Caddis. The adult stage of caddisflies does not last for too long. This is because they do not eat after emerging. They only breed and lay eggs before dying. These eggs hatch in a few weeks, and a new caddisfly cycle begins.

The mayfly has a life cycle that is made up of three stages, which are egg, nymph, and adult. The nymph stage usually lasts a year or two before the mayfly emerges from the water.

There are flies that imitate the nymph stage of mayflies. These are the hare’s ear nymph and the pheasant tail.

The period when mayfly nymphs emerge from water is known as the dun stage. During the dun stage, the mayfly simply floats on water, enabling its wings to dry before they take flight.

Rainbow trout enjoy eating fish eggs. As a matter of fact, they feed on eggs of other fish as well as eggs of their own species. Some of the favorite fish eggs for rainbow trout to eat are salmon eggs, trout eggs, and white fish eggs. They also consume a range of fish species of different sizes.

Some of the fish species that rainbow trout feed on are yellow perch, minnows, and trout.

Casting crankbaits is a great way to imitate fish in order to catch rainbows. You can get your crankbaits in different colors in order to find the suitable choice that matches the hatch.

Leeches are also consumed by rainbow trout. The best fly pattern to imitate leeches is a wooly bugger. Make sure to get the wooly bugger in olive, black, or brown color to match your hatch.

Crayfish and Other Crustaceans

Crayfish and other crustaceans like freshwater shrimp and scud are part of a rainbow trout’s diet. There are fly patterns that imitate scuds and crayfish, but you can also use soft baits for this purpose.

As an angler, knowing what your favorite game consumes is a crucial part of your fishing process. This is because feeding affects the taste, appearance, and location of the fish. The taste and flavor of your fillets are determined by what the fish eats.

Fish species that feed on other fish are sure to taste better than fish that consume sewage. You can also know where to look for fish and how to attract them to your fishing line.

Rainbow trout and steelhead trout have varied diet that includes insects, fish, and vegetation. They also eat items like fruits, snails, and mammals like mice. There are baits that imitate the main items on a rainbow trout’s diet. This means that you will have no problem attracting trout in the water.

It is, however, important that you use the correct fishing style. Ensure you do not spook the trout and cause them to detect your bait. Overall, prioritize safety at all times, making sure to use all the needed fishing gear.