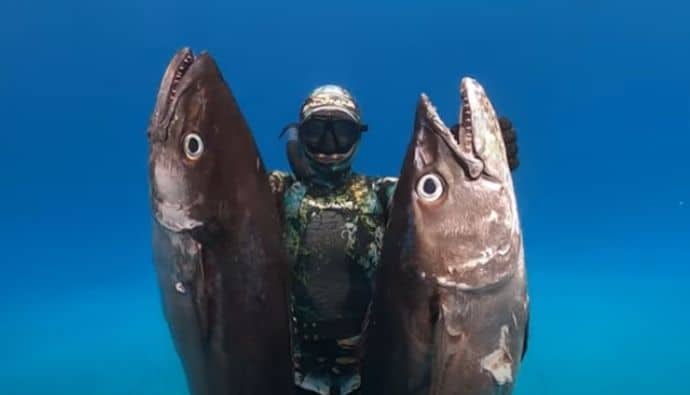 Being in a world that is predominantly filled with men in the field of sports, it can be hard to find a sport or activity to participate in that you feel comfortable in. When it comes to sports, many are traditionally seen as ‘male-dominated.’

This includes football, spearfishing, basketball, and hockey. For women who want to get involved in one of these sports, it can often be difficult with men. This is especially true if you are a woman trying to make a name for yourself in a male-dominated field.

While it may seem impossible at times, women have managed to break through the glass ceiling and become successful in fields once thought to be only for men.

Listen to Lauren Fisher on the Cast & Spear Podcast

Here is what Lauren Fisher, a spearfishing woman from Australia, has to say about being a woman in a male-dominated sport.

“Just having people that don’t doubt me has given me the confidence whether it’s women or men, I feel like I’ve just been so lucky in that way that I’ve had people around me that have never doubted me from the day one when we were going spearfishing,” she said.

Having role models helps break down the barriers that girls and young women often face when it comes to sport. It shows them that they can be just as successful, if not more successful, than the boys and men in their chosen field.

This is especially important for young girls just starting in the sport. They need to see that there is a path for them to follow and that they don’t have to give up just because it is a male-dominated field.

There are many benefits to having successful female athletes as role models. Some of these benefits include:

When it comes to Lauren, she had the opportunity to meet and train with some of the best spearfishermen in the world. This gave her the chance to learn from the best and showed her that anything is possible if you put your mind to it.

In an interview, she said the following about being a woman in a male-dominated sport:

“I think it’s just the women that I’ve dived with are the people that I follow. Like Erin McGinty was up on Thursday Island for a couple of years while I was there.

And she’s been my biggest inspiration with getting into spearfishing and having my boat, going out and doing it with so much confidence like she does it, and the way she runs with speed, not fearing what she does. She never doubts herself.

I feel like that is what I’m like, and I still need to be more like her. And I think that I am getting more confident even though I am still very, very new to this.”

Having a role model is great for aspiring athletes and all women. Seeing successful women in male-dominated fields can give other women the confidence to pursue their dreams and achieve anything they set their minds to.

How Women Can Get into a Male-Dominated Sport

There are a few ways that women can get into male-dominated sports. The first is by finding a mentor. This is someone already successful in the sport you want to get into.

They can help guide you and give you advice on making it in the field.

Another way to get into a male-dominated sport is to find a supportive community. This can be online or in person.

When you have a group of people backing you, it will make it easier to face the challenges that come with being a woman in a male-dominated field.

The last way to break into a male-dominated sport is by showing your strength and skill. You can do this by competing in tournaments or events and proving that you are just as good as the boys and men in your sport.

No matter how you do it, the most important thing is never to give up. Keep working hard, and don’t let anyone tell you that you can’t achieve your goals.

Lauren is a great example of how women can succeed in male-dominated sports. If you are a woman who wants to get into a male-dominated sport, find a mentor, join a supportive community, and never give up. With hard work and determination, you can achieve anything you set your mind to.

Why Sports Are Important

Being a woman in a male-dominated sport gives you the chance to learn and grow as an athlete, but it also provides you with an opportunity to help others.

Whether teaching them the ropes or simply showing them that anything is possible, you can use your experience to empower other women.

Lauren said, “I think even teaching the people that I’ve taken out and them learning and then seeing the fishermen and spearfishing people that they’ve become, it’s pretty cool to see.”

Sports are important because they provide a sense of community and camaraderie. When you are a part of a team, you can rely on others for support in the field. This is something that Lauren knows all too well.

Being a woman in a male-dominated sport can be difficult but also rewarding. You will learn a lot about yourself and become stronger physically and mentally. So, whatever your sport of choice may be, don’t give up and always aim to be the best that you can be.

Why Is the Number of Women in Male-Dominated Sports Growing?

There are many reasons for this shift, but some of the most common reasons include the following:

Despite the growing number of women in male-dominated sports, there are still many challenges that female athletes face on a daily basis.

Some of the challenges that female athletes face include:

Lack of Support from Family and Friends

If you have a dream to pursue a career in a male-dominated sport, it is important to surround yourself with people who will support your dreams.

While the number of female role models in male-dominated sports is growing, there are still many areas where there are none. This can make it difficult for aspiring athletes to see that anything is possible.

This can take many forms, like getting passed over for a promotion or being treated unfairly because of your gender.

Society often expects women to perform higher than men, which can be difficult to live up to.

This can be anything from lewd comments to sexual harassment.

The Fear of Not Being Good Enough

When you doubt someone’s capability because of their gender, it only puts more pressure on them. This is her view “The more doubt that you put on other people, the more doubt they’re going to have in themselves. My confidence has come from people not doubting me,” she said.

However, female athletes are determined to achieve their goals despite these challenges.

How to Overcome These Challenges

To overcome the challenges faced by female athletes, it is essential to have a support system in place.

She said, “I’ve always had people around me to back my decisions and back my preparation for a trip.” This could be a group of friends or family members who believe in you and your dreams.

Lauren said this about her journey when starting spearfishing “When I started, there was this epic chic that believed in me, and there was just no doubt in her mind that I could do it. I went and backed the trailer down, and I felt like when you have people that don’t doubt you, it gives you confidence.”

It is also important to surround yourself with positive role models who have achieved success in male-dominated sports.

As Lauren said, “Seeing other women doing everything and I’ve been so lucky that I’ve had that in my spearfishing.” This gives you the inspiration and motivation you need to push through any obstacle in your way.

Lastly, it is crucial to have a positive attitude and be confident in your abilities. Remember that you are just as capable as anyone else, and there is no reason to doubt yourself. With hard work and dedication, you can achieve anything.

“Planning trips has been all on me, where we’re going and how much fuel we’re taking and checking the weather. And I think that is where a lot of my confidence this year has come from”, she said.

Planning your trips, being self-sufficient, and knowing your limits are signs of a strong and confident woman.

Fisher has shown that she is capable of anything, despite the challenges she faces as a female athlete in a male-dominated sport. With her positive attitude and determination, she inspires us all.

Being a woman in a male-dominated sport can be challenging but empowering. You are in control of your destiny, and you can achieve anything you set your mind to.

With hard work and dedication, you can overcome any obstacle. Remember to surround yourself with positive role models and a support system of family and friends who believe in you.

Lauren Fisher is a perfect example of how perseverance and determination can help you overcome any obstacle. Despite the challenges she faces being a woman in a male-dominated sport, she has managed to find success.

Fisher’s experience as a woman in a male-dominated sport is unique and insightful. She has faced many challenges but has also found many advantages to being an exception in this field. Her words provide an essential perspective on this topic.

YouTube
Articles » Diving » Being a Woman in a Male-Dominated Sport