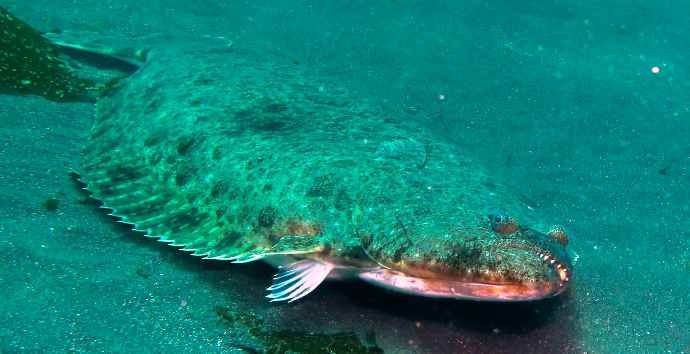 One of the many California Halibut Facts is their notoriety for putting up a fight against anglers. This fish goes by different names. To the researchers, they are Parilichtys californicus.

Anglers call them flounders, chicken halibut, bastard halibut, and portsider. More massive halibut is a barn door. California Halibut is widely known to be a flat and elusive fish with one eye side.

California halibut has a compressed body in an oblong shape. Known as a flatfish with its small eyes on one side (usually the left side). But about 40% of Parilichtys californicus are right-eyed.

The juvenile California halibut looks like a regular fish. As it grows, it morphs into its more commonly recognized feature, with one eye migrating to the dorsal side.

These fish species have a firm body, wait for pectoral fins, and a wide caudal fin for rapid propulsion in the water. The dorsal or eyed side color ranges from brown to brownish-black and white on the ventral or blindside.

California halibut grows relatively slow. The female halibut essentially grows more rapidly than the male halibut. They reach approximately seven to nine inches and about one pound in the first year.

A female halibut matures at four years of age and 15 to 17 inches in length. In comparison, the maturity of a male halibut is at two to three years. The California halibut can live up to 30 years in the wild. They can reach a maximum size of 152 cm and a mass of 33 kg.

California halibut fishing is open year-round. However, the spawning season makes it more enjoyable and fun to catch the flatties in the water. A mature California halibut moves inshore from February through July to spawn.

California halibut is one of the most favorite fish during their peak activity from April to June. So, anglers who hope to bag a big halibut should head for the water in these months.

Parilichtys californicus considers bays and estuaries their nursery grounds as they are demersal fish like the john dory fish. These chicken halibut are widely distributed in North America. As they are present from the water of Magdalena bay, Baja California, Mexico, to Washington state.

These species love the ocean floor, so expect them to be near sand, gravel, or muddy bottoms. Therefore, fishing near a rock, wreck or hard bottom shelves will help you catch chicken halibut. They take cover in the sand to avoid enemies or ambush prey, so the ocean floor sand usually covers them.

Southern California’s coastal water is an ideal hunting location for anglers who want to bag a halibut.

You can fish for California halibut in the SoCal water using the typical pier fishing essentials (rod, reel, line, lures, rigs, baits, and tackles). Plus, you may also deep dive down the sand of the ocean water to fish for these species with a pole spear or other spearfishing gear essentials.

The California halibut are a fun species to fish for all year-round. For commercial fishing of halibut, make sure to abide by the California Department of Fish and Game regulations.

California halibut fillet is a lean fish that is mild in flavor. However, the fillet preparation of this fish may vary. They can be baked, broiled, batter-fried, pouched, sautéed, steamed, or served as sushi.

The freshness of California halibut matters significantly to avoid loss of moisture from freezing. Because of its leanness, it is unforgiving of overcooking its meat.

The recreational fishery for California halibut remains open all year. The bag and possession limit a day is three fish north of Monterey County, and five fish south of Point Sur, Monterey County. The size limit is 22 inches in minimum total length.

What is the difference between Pacific halibut and California halibut?

When fishing for California halibut, it’s good to be aware of other fishing boats that are doing well. Take note to keep a respectable distance unless invited. Take the position upwind or up current of the boat to cover the productive bottom along the same track.

Always gauge other anglers’ attitudes through a little conversation before sharing productive spots where the flatties may be hiding in the sand.