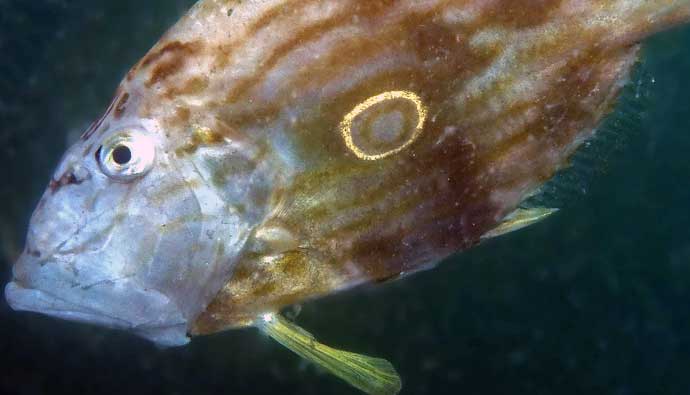 Some might call the john dory the ugliest fish in the ocean.

However, when you fish john dory and get a chance to cook them up, you’ll be blown away by the mild sweet flavor and delicious texture it has to offer.

The fish has a large mouth, extremely thin body which is oval-shaped and over 10 formidable sharp spines that run along the top of its body. It also has false eyes or large black dots on either side that disorient predators.

The dore fish can be found in the North Atlantic as well as cooler parts of the South Pacific. Common in the UK, New Zealand, and Australia.

Where to Find John Dory

John dorian fish are demersal and can be found in depths that are a few meters deep to several hundred meters deep. They are poor swimmers and remain around weed lines and kelp beds in warm waters. It usually remains near the seafloor over both hard and soft bottoms where they also target their own species.

How to Catch John Dory

How to catch John Dory

The best way to snag a john dory fish is via rigs such as the single hook dropper variety but you can also use soft baits and cut-up bait. Target the fish in any area where there is a steady supply of baitfish such as estuaries, harbors and around reefs. If you prefer a rod, use a lightweight rod one that is flexible and sensitive at the tip but strong enough to reel in a dory.

Use J hooks for this fish or you will not be able to hook its odd-shaped mouth. If you are using live bait you can use just about any species to lure this fish such as mullet and spotties. When in doubt try using mussels.

The dory species are available year-round but it is most abundant during May and June and between September and December. The quality of the meat of the fish is the best during these months.

A: The peter s fish has delicate white flesh and a firm yet flaky texture that is slightly sweet.

A: Yes. They have a flavor that will leave you craving more.

Q: How does john dory hunt for prey?

A: The fish is a poor swimmer but it has a tube-like mouth that it extends to catch unsuspecting smaller fish once they inch close enough to them.

Q: Why is it called John Dory?