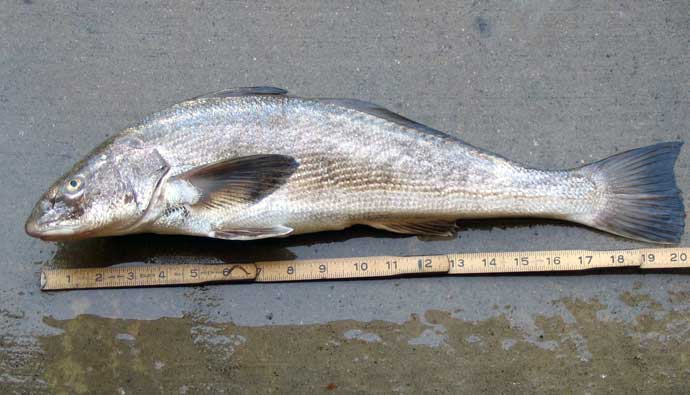 Ready to take on the challenge of surf fishing the Southern California Coast and catch a feisty fish? Menticirrhus undulatus, commonly known as California Corbina, is waiting for you!

Corbina is one of the most popular sportfish in Southern California.

The Corbina (California King Croaker) is one of the most popular sportfish in Southern California. They constantly give pier fishermen headaches due to their difficulty to hook and pickiness to take the bait.

Sometimes they will take whatever you put in front of them and other times, they’ll swim on by unbothered. With the proper know-how listed on this page, you will increase your chances on these surf fish and enjoy your fishing experience.

If you happen to go fishing and see a long slender fish shaped like a cylinder with a chin barbel on its lower jaw- think of Corbina California. Their dorsal fins appear divided by a deep notch, but connected by the membrane. Its color ranges from dark metallic blue to sooty gray on the back fading to lighter shades.

They have dark wavy diagonal lines on flanks; hence the latin term ‘undulates’, black pectorals and a white belly. King croakers grow up to 28 inches in length. Do not confuse it with its relative, the yellowfin croaker.

California Corbina Menticirrhus undulatus swim to a depth of 45 feet, but usually in water 3-18 feet deep. Usually in small schools, Corbina fish are rarely in water deeper than 20 feet.

They prefer the shallow bays along sandy shorelines, and oceanfront surf, and sometimes they swim in just inches of water while using the chin barbells found on their lower jaw to search for sand crabs.

From May through September (spawning begins in July), they are most commonly found in the oceanfront surf areas. Corbina fish are way more fun if you use a light tackle setup due to their fight.

The California Corbina is a resident of Mexican waters of the Pacific Ocean, but has a limited distribution being found in waters from Bahia Magdalena, southern Baja California and the Gulf of California to Point Conception.

Corbina feeds on the Coldwater Mole Crab, Emerita analog, and small amounts of other crustaceans and clams, small fish, and small invertebrates. It can often be found feeding in a few inches of water in the upper surf.

The world record for the largest CaliforniaCorbina fish was 8lb 7 oz but according to Los Angeles Times, on August 30, 1904, a large pier-caught California Corbina was reported. It was caught by Harry Slotterbeck in Redondo Beach Wharf. The record fish weighed a stunning 11lbs and 2 Oz.

Most can be found in small schools and some adults prefer to swim alone along the surf zone in a few inches of water. The fish swims along the sandy shallows looking for food and seeking refuge in the white water that is created by crashing waves.

Some pier anglers or pier fishermen visit the sandy beach piers in Southern California during summer when Corbina fishing is best occurring.

Sandy shore anglers visit beaches between San Diego and San Pedro for a good Corbina fishing experience. Considered one of the best beaches for shore anglers is San Onofre.

How to Catch Corbina Fish 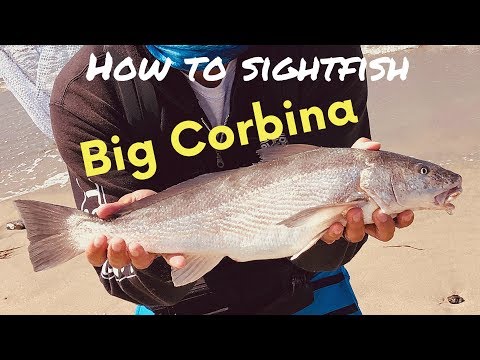 The fish is an inshore species so the best way to catch it is from the shore rather than a boat. Since corbina’s preferable food source are soft-shelled sand crabs, that is the best bait you can use to catch them. You can also use small pieces of shrimp and innkeeper worms.

Plus, use light to medium tackle with a high/low leader and size 6 to 4 hooks. This fish is frequently caught using a method called “sight-casting”.

Pier fishermen are at a disadvantage with Corbina fishing because of the angle, wind, and wave action making it hard to fish a spot without using a heavy sinker.

But they definitely have lucked out on the fact that beds of sand crabs can be spotted near the beach piers during low tides, the areas the Corbina will invade and seek out food as the tide moves inshore.

Use a light tackle outfit if you’re looking to play a bit with the fish. You can get away with a light to medium rod from 7 feet on up depending on your preference.

Use straight mono or with around a 22-inch fluorocarbon leader. For an added challenge use a 4-6 pound test. Since the fish usually rides the incoming tide to the beach while looking for food, use sight-casting to fish for them.

Hooks can vary from a number 6 on up to a 4/0 depending on your rig. Generally, a smaller hook would be advisable with a light line.

Use one or two sand crabs on your hook. If that doesn’t work, try clams, mussels, or marine worms. Usually, live bait works better than a lure. If you can find innkeeper worms, use them as they are also considered one of the best baits for Corbina fishing.

Corbinas can be taken all year round, but the most optimal time is July through October, with the influx of warm water and sand crabs.

From mid-July to late September Corbina fish bite in droves. The former brings smaller surf and clear waters which the fish uses to full effect in feeding frenzies.

You can catch it at any time of day, but Corbina is another croaker that often bites far better at night or early morning in low light conditions.

Corbina has a food value of good to excellent. Therefore, if you catch a keeper, it’s worth bringing it home to cook.

How to Cook California Corbina

Q: Is corbina good to eat?

A: Yes, corbina has a good mild taste that is pleasant to the palette.

Q: Can you eat croaker?

Q: How large can corbina get?

A: Corbina can grow to be as large as 30 inches in length and as heavy as 8 lbs.

Q: Why is the corbina called the croaker?

A: The corbina is often confused with the yellowfin croaker and other croaker varieties because of its similarity to them. Yet, it does belong to the croaker family.

A: It is illegal to buy corbina commercially in the state of California so you will have to catch the fish yourself.

Corbina can be some of the most exciting surf fish to catch along the California coastline if you have the right setup and the proper know-how. To increase your chances of catching this fish, match your bait with the prey it hunts along the shallows.

Be ready to put up a fight though. This croaker fish is an aggressive fighter and may give you a hard time when it is hooked

Do you have any tips and strategies that you use to catch California corbina? Or maybe an experience you’ve had in fishing? Share them in the comments and do share this guide if you liked and found it informative.