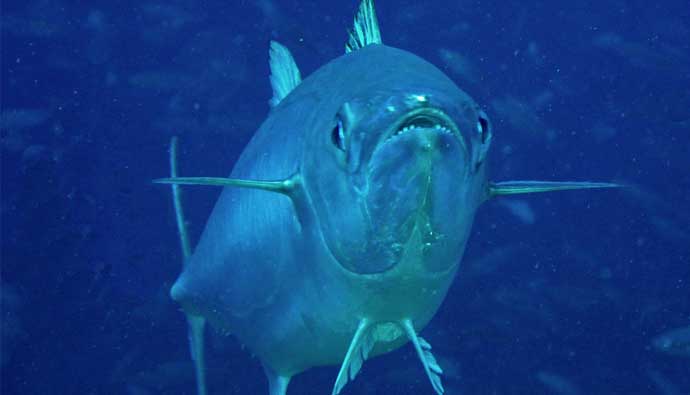 Dogtooth tuna are one of the rarest sportfish to land.

It’s generally hard to find and land the big ones.

Also known as the scaleless tuna (except on the corselet and along the lateral lines), jackass, pegtooth tuna, and dogfish tuna, this fish is a lesser-known member of the Scombridae family.

What’s crazy is that it’s actually a bonito.

The dogfish tuna can be found near reefs and it is noted for its complete lack of scales except the few it has along the sides of the lateral line and the corselet. The fish has long and conical features with a lateral line that is prominent and wavy.

It is also considered the only bonito that has a swim bladder along with an intra-pelvic process. The tuna’s teeth are not only on the jaw but in two patches on the tongue.  It has no spots or other marks on its body.

The dogtooth tuna is not endangered due to overfishing.

How to Catch Dogtooth Tuna

Dogtooth tuna is notoriously difficult to catch and for good reason. Once they snatch the bait the fish dives down fast and since it is quite strong, you will have a fight on your hands. It makes a searing, long and fast run when it is hooked. In other words, you should be prepared to lose a lot more fish than you catch.

Bait, particularly stick baits are the first choice for anglers who are fishing for this tuna. You can also use larger lures or large stick baits if you are fishing at a spot that is known for having a lot of dogtooth such as deep reef edges. The fish can be quite sneaky and may not bite immediately so you will have a long wait ahead of you. It is also attracted by poppers on the surface of the water.

Dogtooth tuna can also be caught with trolling or jigging. If you are using the former, use it to catch large ones by using capable tuna reel like the Penn International VIS 2 big game trolling reels. Load it up with 100 lb braided line and make sure you use a metal leader. If you prefer the latter, use a tuna rod that is light but sturdy enough to handle big catches. 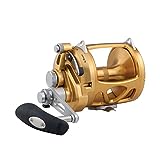 When to Catch Dog Tooth Tuna

Dogtooth tuna can be found and caught all year round but the best weather for popping and jigging for them is in the summertime especially if you are in Fiji. The months between January and May are the best times to catch hoards of this tuna. This is the time of the year when the weather is calm enough to allow anglers to get close to barrier reef breakers, a prime spot for dogtooth tuna.

The best part about this time of year on the island is that the rains are short-lived and usually happen at night when most anglers prefer to remain on the land. A typical summer day sees clear skies in the early hours with the occasional short showers in the evening.

Do you want to spearfish tuna?

Then you’re going to need to dive down to steep drop-offs or reefs that are adjacent to deep water to find doggies. The fish will be in the highest current areas. Then lie on or against the reef rather and don’t hang in the water. Doggies are curious by nature and will come close to check you out if you don’t move too much. Use flashers to attract them.

Most of the time dogtooths swim right up to divers if they wait patiently. This is much better than diving down to them. Once this tuna sees you coming at it, it will speed away and will be long gone by the time your dive is complete.

Make sure that your first shot is precise as well. Once you spear the fish, it will put up a massive and violent fight. If the spear is not lodged firmly in its flesh, it will tangle the line and tear up your gear. To punch through vital areas and slow it down, aim for the spear to come out the eye on the opposite side of the fish.

Some of you might find trolling or spearfishing too easy. Well if that’s the case, maybe it’s worth trying to catch these monsters on a fly rod and reel.

How to Clean Dogtooth Fish

Q: Where is the dogtooth tuna found?

A: Dogtooth tuna can be found around coral reefs in tropical and subtropical areas of the Indian and western Pacific Oceans.

Q: How many kinds of tuna are there?

A: There are currently 15 species of tuna in the world.

Q: Do dogtooth tuna have teeth?

A: Dogtooth tuna has large, widely spaced and conical teeth.

The dogtooth tuna may be a fierce fighter but that is exactly what makes catching it such a thrill. Besides this, it was credited for being as tasty as the famous bluefin tuna.

However, before grabbing your speargun, make sure that you have the strength and stamina to catch and wrangle this aggressive fish.