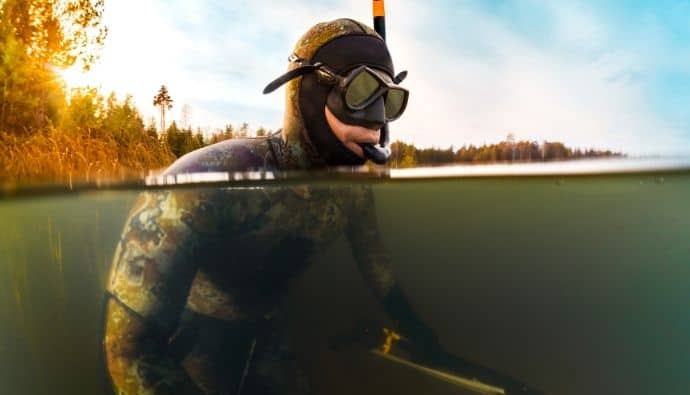 Interested in spearfishing in freshwater? It’s not impossible. You’re in luck! We’re sharing tips that’ll help you get started.

Here is a brief summary of everything you need to know so you can be fully prepared for your first freshwater spearfishing.

These are firsthand guides from expert Jake Lords, the freshwater spearo from Utah.

How to Get Started Freshwater Spearfishing

Gears to Use When Spearfishing

The following are the “must-have” spear fishing gear:

There’s nothing particular to compare from saltwater spearfishing. However, spearfishing in fresh water means no problems shooting things from the surface.

River and lake’s location plays a vital role in the shooting condition. For example, most lakes in Utah have clear visits ranging from 10 to 15 feet. Whereas in Wyoming, rivers, and lakes range from 30 to 40 feet.

It will be cooler than the ocean or saltwater. The longer you can spearfish, you obviously have to remain warm in some way. So, if you’re looking for a wetsuit, go for one with a hood.

Carry out activities that will keep your hands and feet warm. Instead of fishing gloves, or diving gear, consider duck hunting gloves with a fleece inside. One comes from the business Glacier Glove.

If you stay in a 35-degree lake for 10 minutes, your hands will go completely numb from the cold. As a response, utilize the thicker spearfishing gloves with the rubber on them. These items may be purchased at Sportsman’s Warehouse or Cabela’s. Fortunately, they are entirely waterproof.

Is There any Mental Motivation to Fight the Cold?

Expect to jump into a lake with ice scattered around. It will be freezing. Your mind, on the other hand, requires training. What you have to do is adjust your mental state.

Try to think positively of the situation you are under. You must recognize that even if it’s chilly outside, the water will be much warmer.

Always consider diving with a companion. It’s a good idea to go spearfishing with a group of people for the sake of safety. Aside from safety, you can have an assistant bring the necessary stuff on the boat.

Nonetheless, do it with someone who has a fair share and the same enthusiasm for fish catching as yours. Many other fishermen are willing to go on this activity. Just make sure to consider bag limits before going on this activity.

Salmon and trout are two good examples of fish you won’t be able to spear in Washington, Oregon, or California. They’re both referred to as game fish. Keep in mind that if you’re unsure, you can’t spearfish game fish or any just native fish.

Of course, there are distinct types of game fish in each state. Non-game fish include trout, walleye, and northern pike. They’ve already been labeled as invasive. They multiply so quickly, as described, and there are so many of them.

Most anglers do not want to kill trout since they are such beautiful fish. Whereas bass is so fun to hunt because they’re so protective and territorial.

In general, you’re permitted to spearfish in freshwater in most states. That applies if you’re spearing non-game fish. However, while a state may have a macro regulation, rules may also be micro-regulated. It depends on the geographic point of a particular state or river.

Here are some of the freshwater spearfishing regulations on some states:

Common Carp and Shad may be taken by a spear or bow and arrow. The state has no minimums and regulations regarding size, daily limit, and possession limit.

In Oregon, fishing using spears is permissible for carp and suckerfish. Salmon, shad, steelhead, trout, whitefish, bluegill, and catfish are off-limits for spearfishing.

Northern California abolished the prohibitions allowing spearfishing striped bass in freshwater. They did so because striped bass has become invasive fish.

Fortunately, there are some fantastic locations for spearfishing along the Sacramento and American river. Commonly, fishermen in California target natural kinds like salmon and trout.

In Texas, you can’t spearfish game fish in freshwater like rivers. You can only use a speargun on federal waters. Bowfish, Catfish, Carp, Gar, Pirate, Perch, Sunfish, and local Tilapia are non-game fish. So, you can harvest these in Texas’ lakes and rivers.

Freshwater fishing using spears is allowed in Louisiana. Besides conventional spearfishing, river bow fishing is one of the fun activities here. Watch out, though, as an alligator gar might chase and bite you.

Mississippi is a fantastic spot to go catfish spearfishing. Look for large fish in the upper Mississippi river and waterways. Stay updated on the annual restrictions.

In Florida, spearfishing in freshwater is illegal.

How to Know More About Spearfishing

You can join discord groups to share your interests in spearfishing. You can even find people there who enjoy other activities, like scuba diving.

Their members mainly like to catch fish and share knowledge. You can also try talking to fishermen and people with a fishing license.

Freshwater spearfishing is a great sport that is legal in some places. Yet, it is limited to non-game fish. Rivers and other freshwater provide an opportunity for beginners to test their abilities for the first time.

This sport is also an ideal chance to hunt invasive species that aren’t found in the ocean. Always use extreme caution when spearfishing. In addition, make sure to have a strategic plan in place before you start.