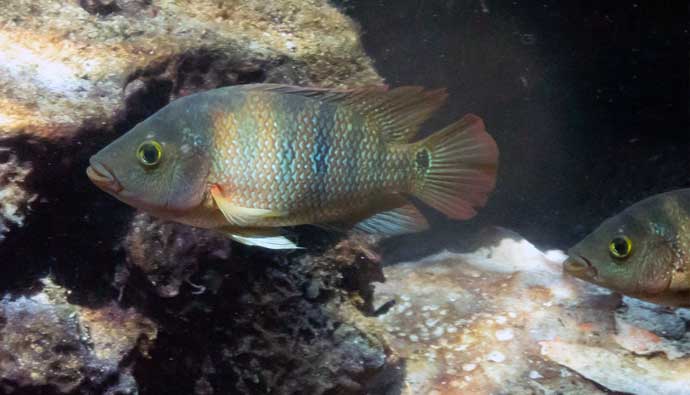 Are you ready to catch the mayan cichlid?

Also known as the Mayan cichlid, false red terror, orange tiger, and atomic sunfish, this fish is widespread in Central America and is a favorite with anglers. Note, this fish is often misspelled as mojara. 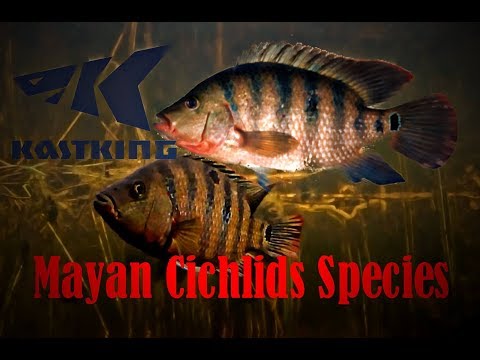 Now let’s learn a bit about this fish and how to catch it.

Mojarras can be found in both fresh and saltwater habitats over shallow coastal lagoons, mangrove swamps, freshwater marshes, and rivers.

It feeds on small fish and invertebrates and is known for brooding its young in its mouth to protect them from predators. The fish swims in schools and tends to remain in shallow water refuges in coastal areas to avoid large predators.

The name ‘mojarra’ is used in Latin American countries as a name for species of the cichlid family such as the tilapia. The fish spawns at the bottom in both fresh and brackish water and females can lay up to 600 eggs at a time.

The castarrica prefer the shallows and can be found in lentic habitats such as mangrove swamps and freshwater marshes. This species is adaptable and can also be found in a range of natural and artificial coastal/inland environments.

How to Catch Mayan Cichlid

You can catch almost any mojarra species using a 2lb test line but go for a 4lb to 6lb one if you are fishing heavy cover which will usually be the case. Even the largest one has a small mouth so use a small hook or it may get ripped off as the fish bites.

Orange tigers can be caught with bait but will not ignore lures either. But, make sure that the weather is clear or you will have a tough time getting them to bite. The good news is that the mojarra fish is curious by nature so it will try out about anything you use to lure it in.

Use small crankbaits such as a floating Rapala as a lure but small rubber jigs will also work.

Mexican mojarra spawn in the spring and early summer but little is known of its breeding habits and fecundity. Yet, what is known is that the fish builds nests for its eggs and are quite protective of its young.

How to Clean Mojarra Fish

How to Cook Mojarra Fish

Q: What do mojarra fish eat?

A: Mexican mojarra prey on smaller fish and aquatic invertebrates such as snails. They are also known to eat flies and mosquitos.

Q: Are mojarra and tilapia the same fish?

A: The name ‘mojarra’ actually describes a species of saltwater fish, but the term is used to describe several freshwater cichlids such as the tilapia. The tilapia looks quite like the Mexican mojarra and are about the same size thus the confusion.

Q: What does the nest of a mojarra fish look like?

A: Nests are oblong, shallow depressions and can be found in the spongy root masses of mangroves.

Q: Why is the Mexican mojarra coveted by anglers?

A: The mojarra is targeted by anglers because of its beauty and also because of its palatable flesh. Its aggressive approach to bait also makes it a favorite among fishermen who love a challenge. The species is available for aquariums but only for those who have the proper facilities to house it.

Q: What is mojarra in english (mojarra en ingles)?

A: Mojarra is a two-banded sea bream that can be found in shallow fresh and saltwater environments.

The Mexican mojarra fish is usually caught as bait for larger fish species but rather than buying them offshore. You can get them for free by using these fishing strategies.

If you have already tried your luck and succeeded in catching this fish, please share your experiences, tips, and strategies below.