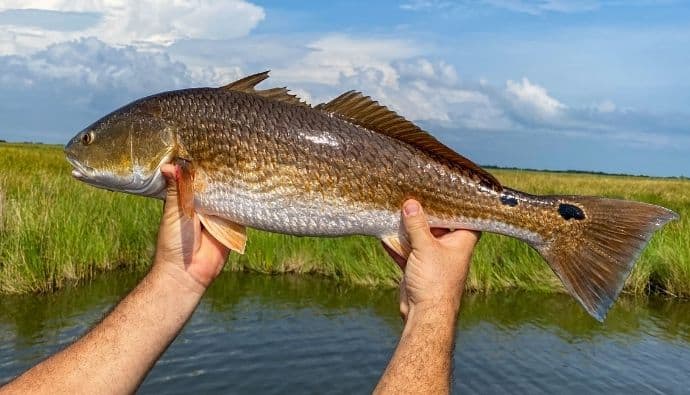 Redfish or red drum, the names are synonymous with one of the most sought-after fish in salt and brackish water. Weighing up to 94 pounds, the largest of the species are called bull reds and are envied among trophy anglers the way Willy Wankas ticket was.

Common in Southern seafood cuisine, the redfish is a delicious and hard fighting game fish that dwells in a habitat that ranges from up the Atlantic seaboard down to the coast of Mexico.

Stubborn and determined fighters, these golden copper-colored fish can be found in almost every aquatic environment with a significant salinity content from estuaries and bayous to the coastal plains.

If you’re planning to catch redfish, this redfish fishing guide will help you catch some. Check out our tips below.

Though they have a distinctive golden copper color, the most notable feature on a redfish tends to be the black spot towards the end of the tail. Ranging from 11 to 24 inches on average, these predatory fish enjoy a variety of bait.

Adult redfish usually consume mullet, crabs, and shrimp during summer and fall months. During spring and winter, lizard fish, croaker, worms, pinfish, and once again mullet comprise most of the menu.

However, the species is always notably hungry and will consume just about anything within its edible purview despite the conditions in the environment.

Redfish will range in depth from the surface to about 30 feet buttend to hunt near the surf in packs of 3 to 5, moving fast and searching for an easy meal.

Redfish will thrive just about anywhere, however, they are driven by two key things, these being food and protection. Structure is integral to their nature, grass beds, oyster beds, jetties, docks, and rocks are all common places to find redfish.

They can also be found in deeper channels or holes within estuaries as well as grass flats and mangrove groves. Structure provides its own ecosystem, is it a shelter for not just a redfish but also its food sources such as mullet, shrimp and crab.

Though not particularly migratory fish, the red drum will adapt to its temperature surroundings.

During winter, redfish will push into creeks with muddy bottoms and shallow flats as these waterways tend to hold heat. They will also move in larger schools, which translates as an angler to a single bite can mean multiple further down the line.

During spring, it’s essential to correctly pick your days for angling. As the days begin to warm, so does the water which correlates to higher numbers of mullet and shrimp in the red fish’s habitat.

The aggression and speed at which the fish forage during this season increases in comparison to winter.

In summer, the weather is a major factor in angling for redfish. The hotter months cause redfish to seek deeper, cooler water in an attempt to avoid heat. Prioritizing deeper water near jetties, docks or holes in estuaries or channels will lead to success during these months.

The prime season for redfish, however,  happens to be the fall. Like bears preparing for hibernation, the red fish’s activity level and hunger reach their peak during this season.

Feeding frenzies in the shallows and absolute annihilation of shrimp and mullet schools are commonplace during this time of year and should be capitalized on.

Similar to the tackle used for black drum, the close cousin of the red drum, a 7-foot rod with a 3000 to 4000 size reel is standard equipment in angling for redfish.

The line used may vary, for instance, a heavier line will often be used when angling around oyster beds, or pilings lined with barnacles. Lighter line is often implemented when fishing grass flats or sandy-bottomed shallows.

Also similar to fishing for drums, the environment does dictate the tackle. For instance, surf fishing may require a longer rod and reel and the leader to suit your needs as sharks are some of the Apex predators in the surf.

Angling around rocks, jetties, or docks that tend to have sharp corners or objects such as barnacles or mollusks attached to the structure may require a more sturdy leader.

In conjunction with leaders, heavy sinkers often keep the bait pinned to one specific area and may be used when implementing a standard Carolina rig, a favorite of surf or channel fishing.

Alternatively, using a weighted jig head will allow for fishing shallow flats. Popping corks can also work well in a variety of water depths as the movement will stimulate the predatory instincts of the redfish.

Redfish are sight primary predators, and are drawn in by movement. Implementing poppers or shallow running spoons are always favorites when chasing reds with artificial lures.

Shrimp like plastic worms or jigs are also incredibly effective but must create a disturbance or be visually stimulating enough to draw the attention of the red drum.

How to Catch Redfish

There is a multitude of ways to catch redfish, and all of these are dependent upon the environment in which the angler finds himself.

Surf fishing is commonplace along the East Coast and beaches of Florida. However, saltwater fly fishing is gaining momentum and is ineffective amidst the brackish water flats and marshes commonplace in the south east.

Angling from a boat has its benefits as it allows access to previously untapped areas in which massive redfish may be holed up. Dock or pier fishing can be a successful route to take, however, this will more often result in catching sheepshead or black drum over redfish.

Insider Tip 1: Seek out under-fished areas, whether on a boat or fishing from shore. Redfish seek out structure and food shelf add these factors into your search.

Insider Tip 2: Red drum can be sight fished however it’s imperative not to spook these creatures by disturbing the environment too much.

They are rapid-moving and attentive creatures, so staying well ahead of them with a cast and placing their meal directly in front of their line of sight is imperative.

Insider Tip 3: Although artificial bait may not be as successful as its live or natural cousins, it may be implemented to a high degree of success. This is incumbent upon the beat resembling natural prey for the redfish’s environment.

Insider Tip 4: When using live bait, ensure your selection is something that resembles the food the redfish may find in its current habitat.

Consistency is key and though redfish can be incredibly temperamental when it comes to the weather, they are a very reliable species that comprise a large amount of southern saltwater cuisine.

Fun to angle for and a good fight, red drum are many anglers’ “wet dream” when it comes to heading out into brackish or saltwater.

Whether it’s casting from the coast, or heading into the brackish backwaters, anglers will be sure to find the coppery gold ticket cruising the water in search of a meal.

Utilizing the tips and information provided above, anglers may successfully avail themselves of redfish or drum and weather permitting never return home again with the ice chest.