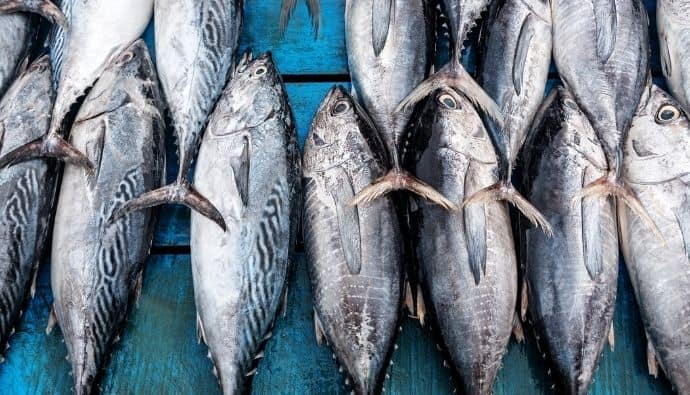 After the thrill of fishing, you might feel the temptation not to take immediate care of your catch. Well, don’t. This may be the difference between relaxing in your favorite chair after a nice tuna-filled dinner or coming down with a bout of scombroid fish poisoning.

We have Brian with us to ensure you are in the best position to prevent this kind of food poisoning. He’s an expert angler to give you a heads up on this fairly common source of fish contamination.

You can come down with scombroid fish poisoning or histamine fish poisoning when you eat fish, mostly from the Scombridae family, that has not been properly refrigerated.

Remember, your catch should be immediately refrigerated at 40 degrees F or lower. Doing this can give it a shelf life of up to three days.

Because of improper processing and improper refrigeration, certain bacteria grow in the dark meat of freshly caught fish that decompose to create a toxic reaction.

This reaction produces the scombroid toxin, which is a histamine-like chemical associated with scombroid fish poisoning.

Scombroid fish probably include some of your favorites; mackerel, tuna, and bonito. Like bluefish, marlin, yellowfin tuna, mahi-mahi, and escolar, other fish can also cause scombroid fish poisoning.

When fish are not refrigerated properly, bacteria begin to break down the flesh of the fish, and the histamine is formed. This chemical is heat-resistant.

So cooking your catch well will not reduce the histamine levels. Even though cooking the food may destroy the causative bacteria.

Because of varying histamine levels in the affected fish, you could share a contaminated portion of fish with your family or friends, and you all may show varying symptoms.

The effects of histamine fish poisoning may also differ from person to person.

How To Preventing Scombroid Fish Poisoning

Brian notes that anglers get simple things wrong that increase the risk of scombroid poisoning, like leaving your catch on your waist for too long after making a catch.

Or you have a cooler but not enough ice. These lapses mean you are creating optimum conditions for histamine production.

Brian here is big on prevention. The key thing to remember is; when going fishing, the longer your catch is out of ideal chilled conditions, the greater the risk of scombroid fish poisoning.

To help keep you safe, here are a few things to be mindful of before you set off in your boat in the hope of a catch.

For instance, if you have your sights set on some Augie, you should have at least two pounds of ice per one pound of catch. Augie, in particular, is a hard-running species, so they get warmer very quickly hence the need for larger quantities of ice.

For other species of fish, you will not need as much ice. However, Brian recommends always having amounts of ice on onboard your boat.

So you should cover at least a regular-sized couch so you can sufficiently cool your catch.

Make Use Of Brine

Caring for your catch doesn’t end on your boat. Once you get home, Brian suggests creating a brine. You can then combine this with your layer of ice to keep your fish cool.

Combining the ice with the salt creates a nice layer that hardens the ice and makes it colder.

Another option for anglers is to keep the fish in water after catching it. This works well when you have the necessary compartment on your boat or Kayak.

If you don’t have the necessary compartments on your boat for your fish or lack ice, your fish will be at the mercy of the heat and increasing your risk of scombroid poisoning. But our expert Brian has an easy way around these constraints for you.

You can take a towel or even a shirt, soak it and wrap up the fish. You then continue to saturate the wrap with cool water.

Brian leaves nothing to chance when it comes to storing his catch and likes to leave his fish on ice for at least 24 hours before cooking. Keeping your fish well-cooled at home isn’t a problem, as freezing is an easy option.

Brian is more particular about his cooling methods and isn’t a fan of freezing. He favors flash freezing, followed by vacuum sealing.

Look For The Signs

Scombroid poisoning symptoms begin to show about a few hours after eating fish contaminated by the toxins. These symptoms mimic a fish allergy with facial flushing and sweating, among others.

Symptoms of scombroid poisoning you should look out for are nausea, vomiting, gastrointestinal symptoms like abdominal cramps, diarrhea, and headaches. In some cases, people report that the fish has a peppery or metallic taste.

Most people get mild symptoms from scombroid poisoning. They usually last for about three hours and rarely go beyond two days. The amount of histamine needed to trigger symptoms may differ from person to person.

Some people confuse scombroid poisoning with an allergic reaction because of some of the symptoms. Unlike a reaction to an allergy, there is no skin swelling.

Also, because this form of scombroid poisoning is not an allergic reaction, it does not require epinephrine injections.

The good news is scombroid poisoning very rarely results in death. But, this condition should not be taken lightly because it is still one of the most common causes of death associated with eating fish.

If you fall victim to scombroid poisoning, our expert, Brian, recommends you take an antihistamine like Benadryl for treatment in severe cases. He also recommends you drink a lot of water, so you flush the poison out of your body.

Other Forms Of Treatment For Scombroid Fish Poisoning Include:

If in doubt, it doesn’t hurt to contact your health care provider for more expert advice, especially when the symptoms from this foodborne illness start worsening.

Just remember to store your catch properly to avoid scombroid fishing poisoning. And always check signs of spoilage before you decide to cook it.