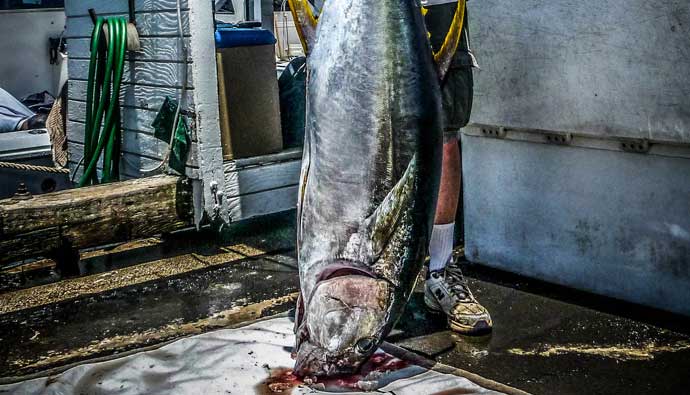 Before we jump into how to catch them, let’s get the know this beautiful fish better.

This fish is also known as ahi, Allison tuna, and Pacific yellowfin.  This speedy fish has long been coveted as a sportfish that gives as good as it gets.

These are fairly abundant in tropical waters (in the Pacific, Atlantic, and Indian Oceans) and the young ones are known for creating large schools for protection. In this guide, you’ll learn a little about the fish, how to catch them, and how to enjoy preparing them.

Yellowfin is considered to be the most colorful out of all the tuna species. The back is a gorgeous blue/black and fades to silver on the belly and lower flanks. Blue or yellow stripes run from the eyes to the tail and all the fins are golden yellow in color as its namesake.

Adult yellowfin usually remain in deep water, but anglers often find some close to the surface. The fish often mingles with other species such as the bigeye tuna, and they can reach close to 40-inches in length. It spawns throughout the year in areas where it is abundant and is at its most active during the summer months.

According to the ISSF Scientific Advisory Committee, yellowfin tuna in the Eastern Pacific and the Indian Ocean are threatened due to overfishing.

Yellowfins are ideal targets for trollers and bait anglers as well. If you are the former, use artificial lures, small squid, ballyhoo fish, and strip baits to lure the fish to your hook. Chumming and live bait fishing also helps in deep waters especially if you cast your line offshore.

The tackle you use should be scaled according to the size of the yellowfin you are targeting. For instance, use a tackle that is as light as 15lbs for small schools but uses heavier ones for adult varieties.

When it comes to the best yellowfin tuna gear, you cannot go wrong with composite rods and especially those that are made of a combination of fiberglass and graphite. These have the strength to handle adult yellowfins and are not as heavy compared to pure fiberglass rods.

How to Catch Thunnus albacares

It’s recommended to go with circle hooks to reduce the chance of them unhooking.

The best time to catch yellowfin tuna depends on the location and the time of year. For instance in Costa Rica, the best time to fish for it is between May and November during the rainy season. The tuna starts to show up there during May and peaks during June, July, and August.

Similarly, the tuna season in Panama starts in March, and the fish increases in size till April when the dry season ends. The season peaks during June, July, and August there as well after which the fish starts to reduce in size again.

The best way to find them irrespective of your location is to look out for diving birds and schools of spinner dolphin that travel on top of the tuna.

How to Clean Tuna

How to Prepare Ahi Ahi Sashimi

Ahi Recipe – How to Cook

Q. What do yellowfin tuna eat?

A: At a young age, this fish feeds on tiny zooplankton and adults prey on large, bony fish and squid.

A: This tuna species has a torpedo-shaped body, a dark metallic back, yellow sides and fins, and a silver belly.

Q. What is the lifespan of this tuna species?

While spearfishing for yellowfin tuna, try ascending while you still have breath. That is the best way to make a school come right under you when it is just out of range and is not coming closer.

If you see a large tuna swimming in a straight path and it is unaffected by your presence, position yourself directly above the fish and dive down at them in a straight line as fast as you can to catch it by surprise.