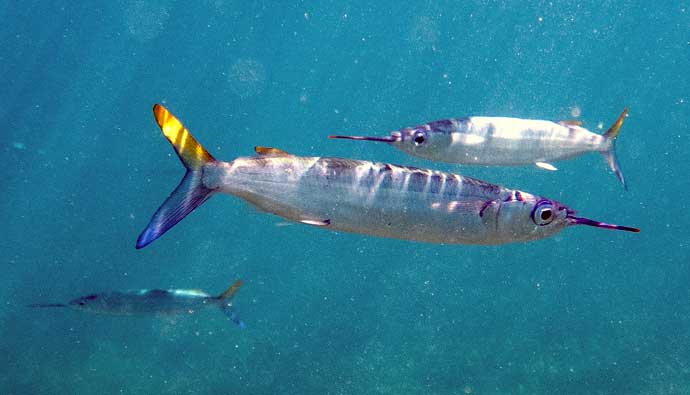 What does ballyhoo fish mean and what does it have to do with the fish of the same name?

The word means ‘commotion,’ and since this fish has a habit of leaping and skittering over the surface, that is where its name comes from.

In this guide, we’ll show you how to catch this baitfish and how to rig one yourself to go after even bigger fish!

It has a halfbeak for a snout and with three stripes that extend the full length of its greenish back. The sides and the belly are silvery, and the caudal fin is vibrant yellow to orange in color.

Ballyhoos can be found off the coast of Florida and in the Caribbean as well as off the coast of Massachusetts during the summer. Ballyhoo bait is considered to be the most common halfbeak bait used for pelagic species in North America.

Ballyhoo fish swims close to the surface of the water because it is chased there by predators. It can swim so fast that it actually skims the surface. The ballyhoo bait fish swims in large schools so you can catch a dozen of them at a time using a simple net or by using Sabiki rigs.

When you are targeting ballyhoo, make sure your boat is anchored along a reef line, patch reef, or any other contour that can hold this fish.

Most reef lines that are located on the east coast all the way down to the keys hold large numbers.

How to Catch Ballyhoo

There are several ways to catch this ballyhoos, but since it remains close to the surface, the most popular method is using a chum bag.

Make sure there is a good, flowing current in the water so that the chum can make a nice slick. Wait for the ballyhoo to come close to the chum slick or till they are within netting distance. If you are using a rod and reel, drift the hook and bait on a bobber to attract the fish.

Once the school arrives close enough, squeeze a small piece of shrimp on a #10 hook and put a cork on the fishing line about 18 inches up from the bait.

Throw it about 2 feet across the school and then slowly reel back the hook bait through the fish. When the ballyhoo bites, maintain a steady retrieve and then lift it onto the deck. That is the best ballyhoo lure you can use that won’t damage the fish.

While ballyhoo fish can be done all year round, some commercial fisheries forbid the fishing it during August when it spawns.

The bulk of the commercial harvest is predominant from Miami to the Key West. Especially after cold fronts that span the months between September and December.

In other words, the best time to catch ballyhoo in bulk is late fall and early winter. The good news is that the temperature has little to nothing to do with the quality of the fish.

How to Rig a Ballyhoo

Rigging ballyhoo bait is a skill you have to know if you want to use it as a bait. Here’s how to make ballyhoo rigs:

If rigging ballyhoo seems complicated, you can also buy pre-rigged ballyhoo to make it easier. Also, if you don’t have fresh ballyhoo around you can use frozen ballyhoo for your baitfish rig.

Q: What fish can you catch with ballyhoo?

A: Most anglers use ballyhoo baits to catch sailfish, marlin, tuna, mahi-mahi, and wahoo. Yet, the baitfish are perfect for catching any species.

Q: What is the difference between green and red ballyhoo?

A: Green ballyhoo is the heartiest of the species which maybe because of its grass diet. Red ones don’t last that long out of the water, which may be because of their plankton based diet.

Q: What do ballyhoo fish eat?

Ballyhoo may be easy to catch, but that doesn’t mean novices can net a large school on their first try. It takes time, a lot of patience, and the right conditions to catch a large school or enough to last a full day of fishing.

If you have tips and strategies to catch this fish in droves, share them in the comments below and share this guide if you liked it.