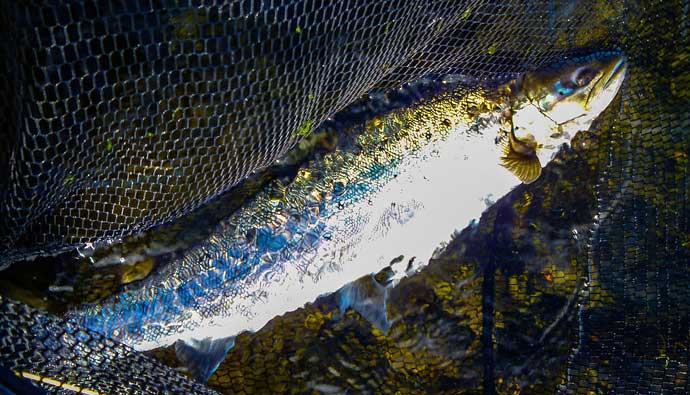 Have you caught a sea trout yet?

Well, if you haven’t, you’re in luck, as we’ve put together a bunch of sea trout fishing tips that should help you land more fish!

But before you head out, make sure you check your local state regulations to figure out your limits.

First, it’s important to better understand what this fish is. It’s actually an anadromous fish meaning it’s a brown trout that has access to the ocean. Some of the varieties of sea trout species you can come across include the silver sea trout, sea brown trout, and the speckled sea trout.

The different species of sea trout have their own special quirks, looks, and features that make them distinct. However, they do share certain attributes. For instance, none of them have spines on their bodies.

Family and location: A member of the Sciaenidae family, the sand sea trout can be found in the Gulf of Mexico from the west coast of Florida right up to Mexico.

Identification – Pale yellow on the back and silver and white below. Younger sand sea trout have cloudy-looking backs that can also form crossbands. The mouth is yellow from the inside and it does not have barbells on the chin.

Size – The average sand sea trout is about 10 to 12 inches long and does not weigh more than a pound.

Habitat – As an inshore fish, this sea trout can be found in bays and inlets, but the young usually inhabit shallow bays. Adults move offshore during the winter.

Fishing tips – The best method to catch sand sea trout are quite similar to those an angler would use to catch a spotted sea trout. The only difference is that the former put up more of a fight than the latter. Use live bait, artificial lures (such as spinners, spoons, and jogs), and flies to attract the fish.

Family and location – A member of the Sciaenidae family, the silver sea trout is smaller in comparison with other sea trout species, but it is shaped similarly. It can be found throughout the Gulf of Mexico and in the Atlantic.

Identification – It has a pale straw or walnut coloring at the back and has a silvery or white belly. Some faint diagonal lines are sometimes visible across the body.

Size – Few silver sea trout grow big enough to weigh more than half a pound. Most are not more than 10 inches long.

Habitat – An offshore fist, the silver sea trout can be found over sandy or muddy bottoms, and it migrates to bays in the winter.

Fishing tips – Due to the size and availability of other trout species like brown, golden, and tiger trout, silver sea trout are rarely targeted by anglers. They are often caught by chance by those who are fishing inshore.

However, these are favorites for novices who want to hone their skills in trout fishing. That’s because silver sea trout are smaller and easier to catch than their larger cousins. The best way to catch them is by using a jig with an artificial lure.

Family and location – A member of the Sciaenidae family, the spotted sea trout can be found across the Gulf of Mexico and the Atlantic. They are most abundant along the coasts of Florida, Alabama, Mississippi, Texas, and eastern Louisiana.

Identification – It has an elongated body with an even tail fin and a black margin. This sea trout is dark gray or green in color at the back with a silvery-white belly.

Size – Adult spotted sea trout can grow as large as 14 to 24 inches in length and weigh about 4 pounds.

Habitat – As an in-shore and bottom-dwelling sea trout species, the spotted sea trout can be found in shallow bays, estuaries, canals, and bayous.

Fishing tips – You can use live bait such as shrimp, soft-shelled crab, worms, mullets, and minnows to attract spotted sea trout. If you are using lures, you can use soft worms, bucktail jigs as well as shallow swimming plugs, spoons, and streamers.

How to Catch Sea Trout

Naturally, the rod and reel combo you use to catch sea trout have to match the conditions that you are fishing in. You can use long casts, but accuracy is preferable when you spot the fish in the distance. Use a 9 to 10-foot-long rod that has a casting weight of about 10 – 30 grams for almost any fishing condition you find yourself in when you are angling for sea trout.

The reel has to be resistant to salt water and use a lightweight reel. You will find yourself casting more times than actually catching anything at first, so the reel has to be light to keep fatigued at bay. While a smaller reel will be lighter, if you use a bigger one that has a larger spool, you can pick up more lines when it is spinning uncontrollably.

Keep in mind that when you fish in the ocean, you have to cast as far as possible to cover as much water as possible. A thin lure will ensure you can connect the lure without an issue and strike hard when the trout finally take hold of the bait.

The last meter can mean the difference between the number of caught sea trout and none at all. Use fluorocarbon fishing line for this. It is stiffer and more durable, which you will need if you use lures and if you want to make sure that the line does not wear down too fast. It also prevents fishing hooks and lures from tangling up.

The flesh is delicately flavored but make sure to store it in ice as soon as you catch it, or it will spoil fast.

Are weakfish and sea trout the same?

No. While the weakfish and sea trout belong to the same family, they look different from one another. The former has elongated spots, whereas the latter has rounder ones.

Where can I catch sea trout?

That depends on the type, but most sea trout species are inshore, bottom-dwelling fish that inhabit shallow canals, bays, estuaries, and bayous.

Can you eat sea trout with worms?

If you eat sea trout that is infected with live worms, those worms will transfer to your body. In most cases, these are digested with no ill effects.

The sea trout species are popular with angler dreams because most are available year-round. However, if you want to try your hand at fishing for this fish, start with the silver variety first.

Do you have any great tips and tackle techniques for sea trout fishing? Share in the comments below and share the guide if you like it.