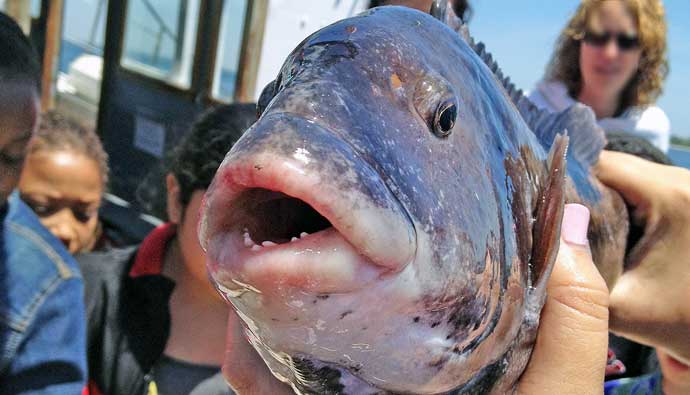 Are you ready to catch Tautog, otherwise known as the Togzilla?

This fish is fun to catch on a wide variety of jigs.

We’ll help you determine what will work for your next outing. Let’s dive in!

Also known as the blackfish fish, the tautog fish is a species of wrasse that is common in the western Atlantic Ocean from Nova Scotia to South Carolina. You can find them around Rhode Island, Chesapeake Bay, and Cape Cod. Read on to find out more about this fish and how you can catch it using a variety of methods.

Tautogs are usually black or a mottled brown with a gray chin and underbelly. It has a long dorsal fin, thick lips, and several canine teeth in the front of its mouth. Tautog teeth that are located in the back of the mouth are akin to human molars and are used to grind up prey. At most, the fish can grow up to 3 feet long but it usually doesn’t grow more than 4 pounds in weight.

The biggest one caught so far is 28-pounds and 13 ounces reeled in off the coast of Ocean City, Md.

The tautoga onitis is also called white chin and it is known for putting up a fierce fight when it is caught. The best months to fish them in include April and May when tautogs move from deeper to inshore and shallow water to feed before they start to spawn.

The male and female tautog are sexually mature when they reach 3 to 4 years of age but it can take them 7 years to grow large enough to be caught legally in a bay and other areas. The fish migrates inshore to spawn in coastal waters during the summer and remains here till fall when it moves offshore to get away from the cold. Some adult tautog can remain in offshore water all through the year.

Blackfish fishing techniques can work well only if you know where to find the fish and what it likes to eat. Tautog prefers living among structures and often inhabits inshore waters around hard substrate habitats.

Tautog prefers around wrecks, rock ledges, mussel beds, a bay, pier pilings, bridge pilings, rock piles, and inlet jetties. This is why most anglers lose their nets because of the rocky structures below.

The fish is quite territorial and remains close to a single site for long periods only moving when it needs to search for food. If you find a group of tautogs, you may also find other smaller fish in the same area. The best bait you can use to catch this fish for food or recreational purposes includes crabs- preferably the green kind and the bigger the better.

How to Catch Tautog

Artificial lures don’t often work with tautog. The best ones to use are fiddler crabs, green crabs, clams, mussels, shrimp, Asian shore crabs, sandworms, and lobsters. The one with the highest success rate so far is a green crab. The crab’s shell has a scent that can trigger the tautog to go on a feeding frenzy.

Large and mottled tautog will put up a fierce fight and can easily carry off breakaway weights in a bay. Make a durable rig by tying about 4 feet of fluorocarbon leader (80 pounds) to the main light using an Alberto knot. Tie a dropper close to the end that is about one inch in length and add a hook to the end. Make a leader that has a loop at each end as well as an overhand knot in the middle. Loop this to the loop in the dropper and attach it to a bank sinker. A breakaway sinker will come in handy when the fish dashes for the wrecks.

You can also the following jigs to catch tautog:

Look for the tautog along the coast in rocky areas and offshore near wrecks, especially around the Chesapeake Bay. You can also find fish around the bridge and pier pilings. It is commonly fished along fishing reefs near the coast just south of Long Island and around Rhode Island, Cape Cod, Delaware Bay, and the Chesapeake Bay. The fish can also be found in large numbers across Massachusetts.

The best time to fish for tautog is during daylight hours and 3 hours before or after high tide. At night, the fish sleeps amid wrecks and rocks with its tail up and head down but you will have a difficult time finding them in the dark.

How to Cook Tautog

What is the best time to go to Cape Cod for tautog fishing?

Spring is the best time for tautog fishing i.e. in April.

How heavy can blackfish get?

Tautog can grow to about 3 pounds in weight on average.

What is the recreational take of tautog on Rhode Island?

You can only fish for 3 fish per person per day and the season spans from April 15th to May 31st i.e. spring.

What is the minimum size limit and season for blackfish in Chesapeake bay?

You cannot fish for blackfish that are larger than 3 inches in the bay and the season spans from May 16th to June 30th.

Blackfish meat has a mild flavor and a firm but finely flaked texture.

What is the best time to fish for blackfish in a shallow bay?

The best times for this include April and June and September through November.

When is the best time to fish for large tautog?

The largest tautog of the season can be found in large numbers in waters that are about 50 degrees in temperature and when temperatures start to fall during late fall.