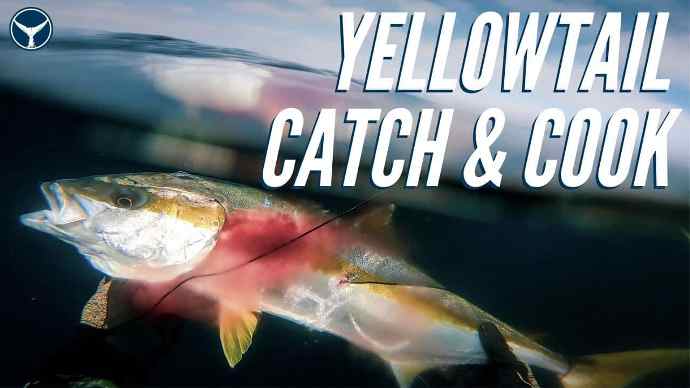 The yellowtail kingfish or otherwise known as just the Yellowtail is the big bad fish of the SoCal waters and the popular makes popular Yellowtail sashimi at sushi restaurants.

Many spearos highly regard the Yellowtail to be one of the tougher fish to catch locally.

Spearfishing this species is challenging, but it is quite fun to fish for a Yellowtail catch and cook. There are many ways to enjoy the Yellowtail- from catching, preparing, and eating the notorious fish.

The Yellowtail is a popular sashimi dish all over the world, especially in Japan and preparing it is easier than catching it.

Here’s a guide on how to catch and sashimi the Yellowtail.

Listen to More Spearfishing Tips on the Cast & Spear Podcast

The key to successfully spearfish the yellowtail is having the right size speargun, enough float with hardline and bungee, the right flasher rigs, and a sharp knife. These fish species can be strong and powerful that you need to prepare and gear up for the challenging fight.

Once you’ve speared a Yellowtail, consider putting the fish out of its misery. By putting your knife behind the head of the yellowtail and pressing in on it, the fish dies instantly.

You can also sting it a little backwards between its pectoral fins to all it to drain blood, killing the fish in seconds. You can perform this while under the water or aboard on your boat.

How to Prepare Yellowtail Sashimi 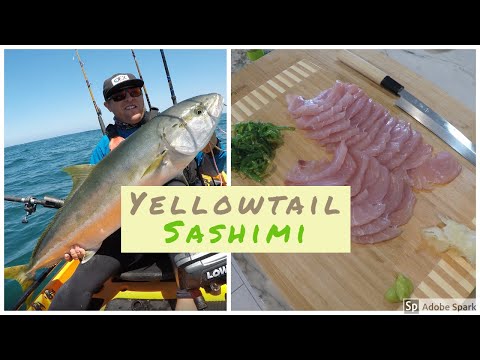 I’m sure there are many ways people do to clean, fillet, and sashimi a Yellowtail. But the gist of it all is to make sure you do certain steps in a way that works for you.

Once you get home after spearfishing yellowtail and you plan on making sashimi out of it, here are steps to make sure your catch doesn’t go to waste.

The bleeding out process should essentially be done right after you’ve caught the fish. Hit the back of the head of the yellowtail to kill it and cut backward between its pectoral fins to bleed it out.

With your sharp knife, gut the Yellowtail and remove its inside contents. You can have fun with this step and check out what the fish has been eating before you caught up to it. If you plan on making sashimi out of a big Yellowtail, it’s best to remove the head before the next step.

After you’ve gutted the fish, pack it in a layer of ice and salt in a cooler. And leave it overnight if you can.

After you take the fish out of the cooler, place it on your cutting board and start removing its collar. Then with your fillet knife, make an initial cut through the skin about half an inch above the spine. T

hen, slightly lifts the meat and start cutting through the fish and get your knife as close to the skeleton as you can. After you’ve filleted one side, flip your fish and do the same thing with caution.

6. Ice or Enjoy Right After

This step depends solely on you. Now, you may enjoy your Yellowtail sashimi right after cutting the fillet. But other spearos who do catch and cook of this species prefer to ice it down another night before cutting it up.

Whether you plan on icing or enjoying it up for the night, prepare your Yellowtail sashimi with a sashimi knife and a regular knife. You want to remove the skin of the fish with your regular knife and the sashimi knife for cutting the fish. After you’ve cut up the fish, bring out your wasabi, soy sauce, stringed ginger, and a pair of chopsticks and dig in.

Yellowtail sushi is one of the prime dishes in Japan and the species is known to contain vitamins and nutrients. It has a high content of Vitamins A and D and Calcium.

If you’re wondering, listen to Why You Need to STOP Eating Fresh Fish on the Cast & Spear Podcast