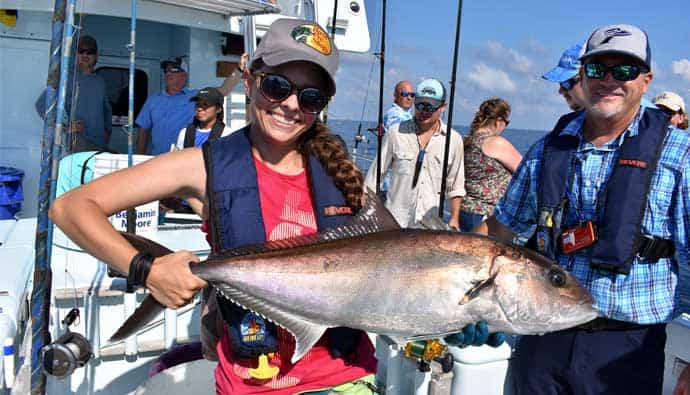 Are you in search of a game fish you can test your fishing skills on?

There are two species of amberjacks you will encounter – greater and lesser with the former being the most popular. Both are fun to catch, just be careful not to search YouTube for those amberjack worms videos…they can be chilling :).

Let’s dive into how to catch giant amberjack!

Also known as jacks, amber fish, jackhammer and horse-eye jack, this fish is sought after by anglers because of the quality of its meat. Considered to be a vicious fighter, the greater amberjack is greenish blue to almost purplish below the lateral line.

It has small teeth and a broad amber stripe that runs along the sides. The lesser amberjack is olive green in color and is silver below. The only features that distinguish it from the greater species are its body which has a deeper profile and larger eyes.

Amberjacks are a wide-ranging fish and can be found in reefs, rocky outcrops, wrecks, and other underwater structures. Bigger amberjacks usually band together in small group and the fish is not an endangered species.

Catch them anywhere in the water column but you can spot them around structures that are near the bottom of the sea bed around the 60 to 240 feet range.

If you are looking for lesser amberjack, you will have to go deeper (from 180 to 400 feet deep) to find it. These are only found offshore so you will need to take a boat far out into the waters and dive for them. If you’re in the states, be sure to go after Florida amberjack or amberjack fish in Hawaii.

How to Catch Amberjack

If you want to fish for amberjack, better target the greater species. It puts up a heck of a fight but the struggle is worth the huge catch. Landing one is more about getting it onto the deck after it is hooked than getting it to bite. That’s because unlike other game fish, it does not tire and will keep fighting right up till the boat.

Since amberjack is quite a heavy fish, you can use the conventional tackle but you can also use a heavy spinning tackle if it is sturdy enough. Use a reel that can withstand 100 pounds and a strong-backed spinning rod.

When it comes to amberjack bait, this fish is far from picky so you can use whatever type you can get your hands on. Live bait is more attractive to amberjacks such as mullet, cigar minnows, pinfish, and threadfin herring.

If you prefer amberjack lures, use a vertical jig which will sink straight down to the bottom where the fish is swimming around.

Greater amberjack swims in groups as it grows but becomes a solitary traveler as it grows older. You can find them in the open sea or ocean almost all year long from April to early winter.

If you want to increase your chances of bagging one, fish for it during autumn during sunrise and sunset. Amberjack fishing also improves throughout the winter off the coasts of Florida as the fish migrates to spawn.

During this time, you can find jacks around structures up to 60 to 240 feet deep underwater.

If you’re lucky enough to be in the area with amberjacks, then you should test your skill going for one of these giants with your speargun. Since they are powerful, you’re going to want a slip tip and a larger gun with a float.

How to Clean Amberjack

How to Cook Amberjack

Cooking amberjack is one of the preferred ways to eat the amberjack fish. If your fish doesn’t have worms, then you can also opt for some amberjack sushi or sashimi…just always be careful when consuming raw fish.

Amberjack taste amazing and are a prized fish to consume.

Q: Are amberjack good to eat?

A: Amberjack is coveted because of its succulent meat. It has a mild taste and requires little seasoning.

Q: Is an amberjack a tuna?

A: Although it is listed as yellowfin tuna on some restaurant menus amberjack is a completely different species of fish.

Q: Is amberjack the same as yellowtail?

A: Yellowtail is also called Japanese amberjack but they are not the same fish.

Amberjacks are fierce fighters but their succulent meat is well worth the struggle you will have to put up with it to reel one in. If you have fishing tips and strategies that can make this easier, do share them in the comments and share this guide.