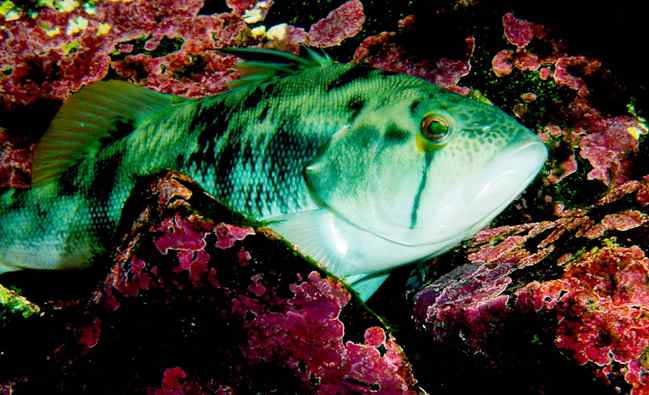 Barred sand bass (Paralabrax nebulifer) is a popular fish to go for in SoCal.

Sand bass is usually in nearshore marine environments. They are over sandy or pebbled bottoms near the kelp. You can also find them near structures like reefs, wrecks, and piers.

Check out our guide to learn how to catch barred sand bass.

Check out our guide on the best barred sand bass lures.

Commonly called barred sand bass, it also goes by other names. They include sandy, grumps, or grumpy in some places, which means large fish, ground bass, rock bass, or sugar bass. In Mexico, they are the cabrilla de arena.

The greek term Paralabrax means “near labrax or near a European sea bass.” The Latin term nebulifer means “I bear clouds.” The latter term is an attribute of the color on the side of this fish species.

If you are fishing in Southern California water, knowing, or at least, familiarizing the sand bass fish features may help you identify them. This fish is slender with a pointy head. The small ones usually have brighter colors compared to the faded colors of the large sand bass fish.

The semblance of sand bass and kelp bass are close, but kelp is brown with white blotches in color. These fish species are easily singled out from related species because of their dorsal fin. It has a high, flag-like third spine.

They range from dark grey to greenish with dusky or faint bars on the side in color. Sand bass has a white belly, and most have freckles on their snouts.

They are rare in high relief, but they are the major species of artificial reefs. While most of these fish are common at 10-120 feet, the fledgling sand bass usually inhabits the shallow waters. The small fish usually swim at a depth of 5-30 feet during late summer to early winter.

The youngsters feast on small invertebrates like amphipods and mysids. In comparison, the mature fish’s diet consists of other fish like midshipmen, crabs, and octopi.

During the non-spawning season, some barred sand bass usually likes to swim in isolation. Others are with the company of at least a few others. But when April comes, sand bass mass together for the spawning season.

They will often leave their usual rock and rubble haunts as they search for water with flat, sandy bottoms. The spawning season may start in April or May and peaks in July. It is the time when their eggs and larvae are drifting in the open seawater, as these species are pelagic spawners.

Sand bass do not change their position often. so after the spawning season, when the gaunt and listless fish return to their reefs, the sand bass show movements of up to 40 miles.

Sport fishery is common in Southern California and northern Baja California, in which sand bass are a significant part. Reportedly, the most catch of this fish was by using a boat, but significant large amounts were also from jetties, piers, and even calmer surf areas.

The summer spawning season is what the private and party vessels concentrate on. However, commercial fishing of sand bass species is illegal.

Barred sand bass maturity usually takes five years, and they reach 10.5 inches in length. However, some only take two years to mature where they’d be 7 inches long. This fish species can get up to 24 years, 25.5 inches in length, and can weigh a whopping 6kg on your fish scales.

What best bait can be used for sand bass?

Live squid may be the best bait for most of southern California’s game fish, including the sand bass.

Other options include small live mackerel and pieces of chunked or stripped dead mackerel. You may also use other fish species like anchovies and “brown baits” like queenfish or white croakers to get them out of the water. For other experienced fishers, artificial lures like plastic shrimp and grubs are also useful in fishing for barred sand bass fish species.