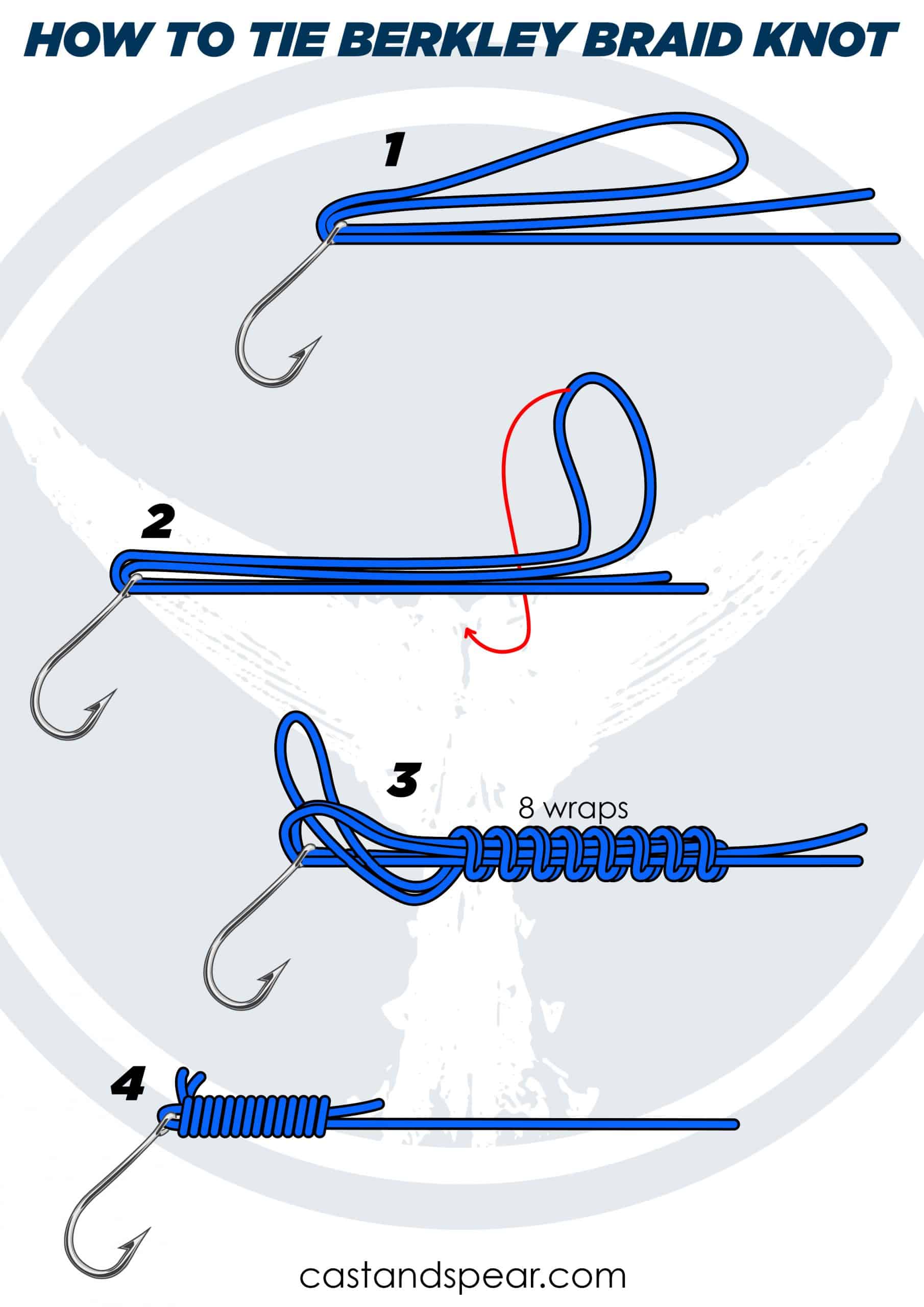 The Berkley Braid knot is considered to be one of the most reliable braid fishing line knots you can use to connect terminal tackle directly to braided lines. This includes hooks, swivels, and lures that may otherwise slip off and ruin your fishing trip.

Created specifically for braided lines that need to be doubled and threaded through the hook eye or bait, these fishing knots can maintain a firm grip. You can use it for both fresh and saltwater expeditions.

Take your braided line, double it to make a loop and run it through the hook eye or the lure.

Double the loopback so that it is parallel to the standing line and the tag end.

Hold the four lines together right behind the eye of the hook.

Wrap the line around the four lines at least eight times by working toward the eye. Then, run the loop end through the opening created behind the eye.

Knot the Berkley Braid by tightening it and then cut off the loop right beside the eye and trim the excess line to complete it.

How to tie the Berkley Braid Knot - Fishing Knot

The double clinch knot has higher knot strength than the Berkley Braid knot since it requires an extra tuck under the final turn.

Plus, you need to pull at least six inches of the line towards yourself to tie it and make sure you moisten the tag line constantly, or the knot will slip out. This knot is a bit tricky to tie on heavier lines, such as braided lines compared to the Berkley Braid fishing line knots.

The Double Jam knot is ideal for all kinds of lines other than just braid, which makes it one of the best knots besides braid knots. It is typically used to tie heavy iron jigs by anglers and can be tied easily even though it looks complicated at first.

The Palomar comes close to being a 100% knot, however, for braid, it’s better to use a Double Palomar for insurance. Like the Berkley Braid knot, it is also supposed to be tied below the hook eye rather than the shank for optimal knot strength and includes a single loop that doubles in on itself.

What knot is best for the braided line?

The Berkley Braid Knot is a great choice. A double Palomar knot is another option.

Is a Uni knot good for braid?

It is one of the few knots that is good for it as well as for mono and fluoro lines. You can also choose to tie a double uni knot for your fishing lines.

How do I ensure my knot doesn’t slip?

Moisten it with water or saliva when you are trying it.