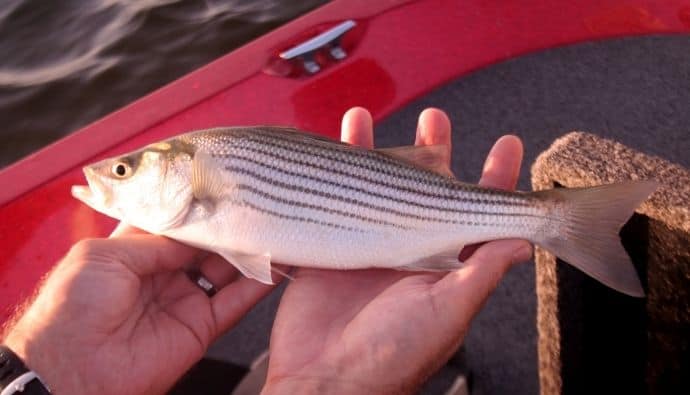 Finding the best bait for striped bass can be a challenge.

You could spend your entire day trying to figure out which is the best bait, but we’ve done all of the hard work for you and narrowed it down to just 5 options.

This guide will help you decide what’s right for you. We’ll walk through the different baits that are proven winners with these fish and explain why they’re so good at catching them.

We’re also sharing some tips! Once you read this guide, choosing what’s right for your situation should be easy!

Understanding striped bass is essential, especially if you want to catch them with success. Striped bass is an Atlantic migratory species.

They tend to swim hundreds of miles during spring to spawn in the tidal rivers and bays.

Stripers in the south of England and the north of New York swim to the south to complete their migration. They then go to the mid-Atlantic coast for rest and to recuperate from their long journey.

Learning their patterns and behavior is a must and will help you find striped bass in different scenarios.

Best Time to Fish for Stripers

If you are from southern New Jersey and the rocky shores of Maine, the best time to go striped bass fishing is from early April to late September.

The mid-Atlantic regions are the first to see stripers during summer as they migrate north and the last in the fall when they migrate south for the winter.

In July and August, striped bass seeks the deepest part of the water, which is cooler. Hungry stripers migrate during the spring and fall. They are vulnerable during this season as they feed on large schools of bait.

In early spring, striper anglers concentrate on the following locations:

The migration of the striped spring bass is a phenomenon that occurs in spring. These fish migrate from their spawning grounds in the Gulf of Mexico up the coast.

Then start congregating in large schools, many of them swimming in slowly, eventually breaking up thousands of miles by July and August.

If you want to intercept a striper migrating, here are the prime locations:

When stripers aren’t migrating or feeding in the open water, they stay on ‘structures’ to call their home. Here are the famous locations where stripers settle when they are not migrating:

Every location can differ when you are striper fishing. It will depend on the weather conditions, seasons, wind, water temperature, moon cycles, tides, and the bait.

Stripers are active at dawn and dusk during the summer months. Also, they’re most active in warm water temperatures.

These fish are opportunistic feeders. They feed on small baitfish, juvenile fish, crabs, shrimp, and other bottom dwellers, including worms and mussels.

Striper Fishing and the Moon Phase

The lunar cycle affects the fishing season in various ways. Some of the changes are noticeable within weeks, while others take several months to come into effect.

Additionally, three days before and after the new or full moon produce the best fishing. Waters during this time have more vertical movement.

The moon’s gravitational pull causes a tide change every 6 hours and 12 minutes.

Striped bass is excellent game fish, and they are an easy catch for any angler. They are also very sensitive to water movement.

The stage of the tide can dictate which areas to fish to catch the bass that will be most active at that given time of the tide.

Wind affects the behavior of striped bass. It is a vital component to locate and catch bass. A strong Nor’easter wind in late August can make stripers feed aggressively.

A non-offset circle hook is required for bait fishing. Use the circle hooks to limit bass swallowing the bait. Here are some of the best live bait for catching stripers:

You can also use live eels as striper bait. Striped bass like large baitfish such as crappie and perch. These fish do not like to be caught with the same type of lure.

However, adding live eels to your lures will make it easier for you to catch them and make a good catch.

Live Bunker is the most common bait used for striped bass. Striped bass is one of the most plentiful game fish in North America, with schools typically found in northern lakes and rivers.

The fish are generally territorial and will fight other fish in the area when threatened.

There are many worms available for fishing, but some are more effective bait than others. Some of the most commonly used worms include brine shrimp, bloodworms, and cutworms.

They are common bait that can be found just about anywhere and in almost any type of water.

Clams are effective bait in areas with strong, changing currents, where clams may represent a meal for hungry stripers. Removing the shell also makes it much easier to rig. The clams can give a sheer amount of scent to catch most fish.

When fishing an artificial lure, you want to use the same tactics with live bait. The best time to use your lure is just before or just after the strike. You also want to have your lure within reach of the hook where it is most visible.

If you are using a hookless lure, make sure the hook is visible without bending over. There are three best lures to choose from: topwater lures, sub-surface lures, and all-purpose lures.

A striped bass trolling rig is a tool that allows you to catch multiple fish at one time. It is also the best way to catch large quantities like stripers.

Bunker spoons, mojo rigs, a tube, a worm, and umbrella rigs are productive ways to fish for stripers.

Here are the best striper rigs for striped bass!

There are many methods for stripers to be caught. Some are difficult to master but are perfect for catching your desired fish species.

Novice anglers may also find these methods useful. Learning the different methods can also help you to catch your next stripers.

Kayakers have an advantage as they can access areas not regularly available to other people. It is because of the size of the kayak boats.

Stripers are commonly found in shallow water in the late afternoon and evening, when they can be seen in schools, feeding on baitfish.

On the flats, stripers are often found during daylight hours. At night, stripers can be found mostly in deeper water between 30 and 40 feet deep.

Fly fishing is a complex sport, and it requires an advanced level of skill. Stripers are usually caught on the fly, using a leader attached to a line with a hook.

It’s important to maintain even pressure throughout the entire length of the rod, making sure the fly hits the water at exactly the right spot.

The sport of surf fishing for striped bass is very popular all along the East coast of the United States. Striped bass is the most targeted species for anglers’ surf fishing on coastal beaches. Specialized tackle and techniques are used to hook them!

Being creative and thinking of new and innovative ways to catch striped bass is all about adapting to the changing conditions. Today, the number of species of striped bass is becoming more diverse.

The challenge now is to think about how best to match the striper baits with the fish. That way, you can catch fish that are most likely to yield a high-quality meal.