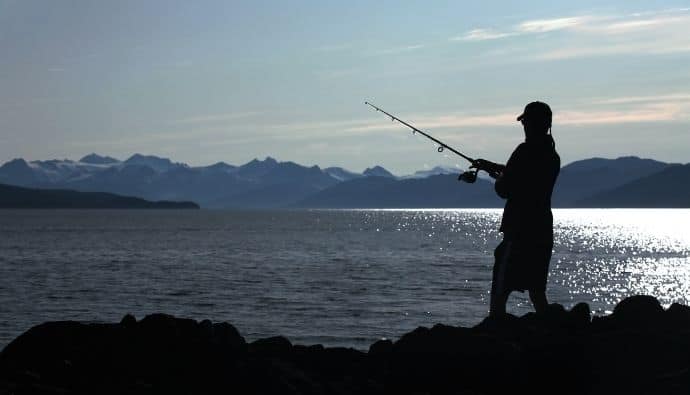 There is a time for everything, including fishing in Alaska. Alaska offers some of the best fishing opportunities, but good timing is key. Since you wouldn’t want to leave empty-handed, you must be wondering when is the best time to fish in Alaska?

The summer months are the best time for your Alaska fishing trip. June, July, and August are the peak months for different species.

Here is everything you need to know about fishing peak seasons as you plan your Alaska trip.

The best fishing time for King Salmon in Alaska is May to July. In May, rivers have low water levels, forcing the species to hide in deep holes. But with each tide, more kings enter the rivers.

King salmon, or Chinook, is the largest of North Pacific salmon species and can weigh up to 80 pounds. Their bluish-green head, silvery sides, and black spots on the upper body identify them.

Kenai river holds the world record of the largest king salmon of 97 pounds and is home to many more. The King salmon run peaks in mid-July.

Kasilof river boasts two salmon runs from mid-May to June, with peak numbers in early June. However, due to its small, shallow, and rocky nature, drifting boats are preferable for fishing to motorboats. The remote Nushagak river is home to peaceful fishing grounds too, with up to 100,000 fish in summer.

Chinooks are large, have powerful fighting ability, and are tricky to hook and challenging to land. However, fly fishing and casting/spinning fishing can get you two kings on the same day.

July till August are the best months to catch pink salmon in Alaska. Mid-August, is when the numbers are high, particularly on even-numbered years.

Even with its silver-gray or pink tinge color, the species is referred to as humpies since males have distinctive humped backs in the spawning season. Their average weight is 3 to 6 pounds, but some exceed 10 pounds.

The Kenai and Kasilof Rivers are suitable fishing grounds. Kodiak Island, too, has large populations and is ideal for angler fishing.

Humpies are aggressive and always put up a fight. Nevertheless, you have better odds of catching some with fly fishing or spin fishing.

The best months to catch silver salmon in Alaska are July to September. Although they begin their movement in late June, the peak season starts in August.

Silver salmon has silver-colored scales, a bluish-green head, bright red sides, and black spots on its back. It is also referred to as Coho salmon with an average weight of 10 pounds.

Plan a trip to Ship Creek since it is easily accessible, and 250,000 smolts were released a few years back. Cohos also visit the Kenai River with an early run from late July to early August and another in September.

Try the Buskin River on Kodiak Island too. More than 10,000 humpies return here every year.

Thanks to their aggressive feeding habits, cohos readily take flies, spoons, and spinners. But once they are on the hook, they leap into the air with their acrobatic moves and can be tricky to land.

The best months for fishing Sockeye Salmon are July to August. The sockeye numbers are highest in late July.

The species has a red body and green head during the spawning seasons hence the names ‘red salmon’ or ‘reds.’

They are easy to spot and target since they swarm Alaska’s rivers every year in hundreds of thousands to breed. Moreover, they are the best-tasting salmon in Alaska, with most people stocking them for winter.

Sockeyes fight the hardest among salmons, and landing them may prove problematic. Fortunately, they get worn out easily, plus they prefer swimming close to the shore where you can catch them easily.

The best time to fish chum salmon in Alaska is June until late August. There is a peak in chum populations in the second week of July.

The chum has a relatively poor flavor than other salmon. Despite this, many anglers find them a spot due to their aggressive behavior.

This species develops large teeth during spawning and is nicknamed ‘dog salmon.’ They weigh between 10 to 15 pounds, but some adults reach 40 pounds.

The species prefers deeper channels to shallow waters. It thrives near river mouths of small and medium-sized rivers.

Chum salmon are difficult to land, even for experienced anglers. They are aggressive and strike fiercely. Moreover, with their relative lack of preferred spawning location, they are difficult to spot.

The best fishing season for Arctic grayling in Alaska is summer, from May to September. The peak times start from mid-August until September.

They are generally smaller, with a typical adult weighing 5 pounds. They are identifiable with their silver body, large dorsal fin, and iridescent spots and markings.

Since these are freshwater fish, they thrive in rivers and large lakes like Lake Clark. The rivers and streams that flow into Lake Clark have high numbers too.

This species is intelligent and has keen eyesight. It can outwit anglers and their lures, making it difficult to land a bite.

July to September is the best time to catch Dolly Varden, with August having peak numbers.

The dolly, a species of the char, takes advantage of the spawning seasons of other species. It follows them upstream to eat their eggs to gain their 15-pound weight.

Plan a trip to the Arctic and Pacific drainage. Kodiak Island and Bristol Bay have the longest runs lasting from June to the end of September. The Kenai River is another perfect spot for residents and anadromous species of this Alaskan fish.

The Dolly Varden is aggressive and can break your fishing line, thus a suitable sport fish.

July till September is the perfect time to fish Arctic Char in Alaska. There is an increase in numbers from early august to early September.

Arctic char can survive in freshwater, though some species migrate from the sea to spawn in rivers. Regular-size arctic char weighs 9 pounds, while dwarf fish weighs 5 pounds.

They are easy to catch because they bask at the shores of rivers and readily bite lures. Nevertheless, slight movement deters them, and they fight hard when hooked.

Rainbow trout numbers in Alaska peak in fall. Although you can go fishing from July until October, it is not until mid-August to mid-September that the numbers increase.

This species primarily thrives in freshwater. Those from streams and rivers weigh 3-4 pounds, while those from lakes are 20-50 pounds.

The Kvichak and Kenai river are prime fishing spots as they have crystal clear waters and abundant salmon that rainbow trout eat.

Rainbow trout are acrobatics who fight relentlessly when hooked. Therefore, be prepared for an exhilarating battle when trying to land one.

Alaska offers all-year-round fishing opportunities, including ice fishing in the winter. Nevertheless, the best time to fish is in summer. Apart from fishing, get to watch the Northern lights or explore the vast national parks in Alaska.