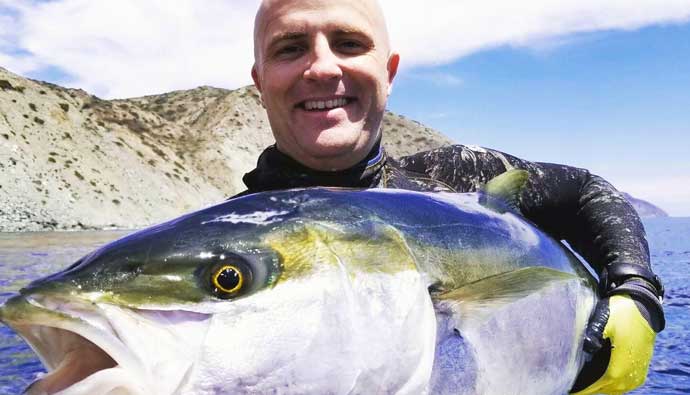 Today’s guest is Brad Thompson a Director of the OC Spearos a fast-growing spearfishing group in Southern California.

Brad is a seasoned business-owner who’s taking the club to new heights.

In this episode with Brad Thompson we cover:

If you’re interested in checking out spearfishing, then visit a club meeting or the OC Spearos website.

Jump to what interests you:

00:41 – Introduction to Brad and how he got started in spearfishing.

04:32 – Safety. Why Brad originally dove by himself until he learned about freediver training. You can check out freediving training at http://www.freedivinginstructors.com/.

13:30 – What are some of the misconceptions about spearfishing clubs.

16:50 – Why each club should cherish its own club culture.

18:06 – The mission of the OC Spearos. The three main driving goals: Safety, Education, and Conservation.

28:27 – Why I think Brad has a direct connection to my brain. Why do I get flack for shooting an opaleye.

29:09 – Thoughts around keeping the sport of spearfishing alive using a community. How he wants to create a federation of fishing and spearfishing people to keep the ocean prosperous. Why it’s important to use the whole animal after you take it.

37:31 – What do people think people are doing when they say “spearfishing.”

39:35 – Why kelp is an untapped culinary treasure here in California.

44:39 – Why “fish-porn” is overplayed and that each video should be more teaching.

50:03 – Why we shouldn’t be a “dick” to new people who want to get into spearfishing. Why do we need more people in the sport for it to stick around?

54:08 – How it’s unhealthy to focus on a goal and not understand it or the process.