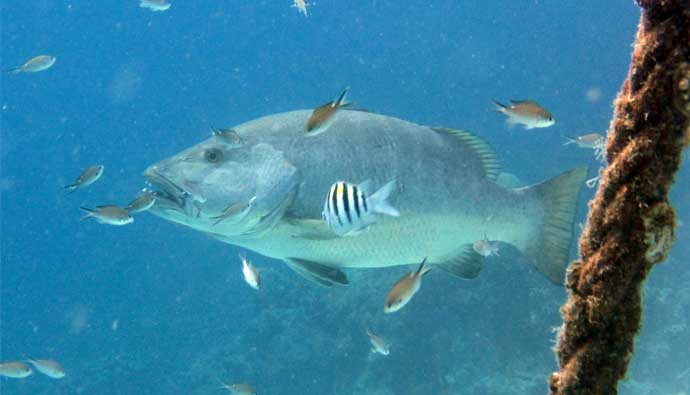 Want to know how to the monster cubera snapper compares to other types of snappers?

In this article, we’re going to talk about the cubera snapper. We’ll cover where it likes to hide and how you can catch it both spearfishing and with rod and reel.

Also known as a dog and Pacific snapper, the cubera snapper closely resembles the mangrove red snapper and other types of snapper. They are deep red in color, have four large canine teeth, blunt gill rakers, and almost the same fin shape and body shape. The young ones are purplish-brown in color, and some adults have a blue streak under the eye.

The cubera is the largest of the 9 snapper species in its range and can grow up to be at least 80 pounds. It’s a strong fighter, and the snapper’s diet includes prawns, shrimp, crabs, and smaller fish.

This snapper species can be found inshore across the eastern Pacific (thus the name) from northern Mexico to the north side of Peru.

Cubera snapper can be found swimming alone along reefs. The fish lives inshore or near the shore under ledges, overhangs and rocky outcroppings over the water.

The young ones remain in sheltered mangrove areas and seagrass beds to hide from predators. Smaller cubera fish can also enter estuaries, mangroves as well as freshwater canals and streams.

How to Catch Snapper Fish

This is NOT a light tackle fish! A cubera will fight you every inch of the way and will, in fact, speed towards rocks when it is hooked. Thus, use a braided line that is at least 80 lbs with a fluorocarbon leader of the same weight class.

Tackle that is used for marlin is strong enough to catch cubera snapper without breaking.

Use iron jigs and other larger metal ones that will work off the bottom to catch bigger cubera snapper. Live bait made of big fish such as skipjack tuna can lure the fish onto the hook.

These are pretty convenient because the tuna swims right down to where the snappers congregate. You can also use feathers, plugs, and spoons to attract the fish.

Cubera snapper is a solitary fish, so if you don’t fish in season, you will NOT find one.

Anglers take out their boats in March, April, July, August, November, and December with July being the best time to catch big cuberas.

If you are spearfishing for cubera snapper over a reef, make sure you are on the pressure point at the frontal edge. Plus, don’t swim out in the current and over the reef or you will spook the snapper. Do a quick jet duck dive to catch the fish by surprise.

When a cubera snapper is speared, it fights in circles, so make sure to hold it above a structure till it starts to weaken. Tangle it in the kelp if possible and get your hands under the gills to secure it before landing it.

How to Clean Cubera Snapper

How to Cook Cubera Snapper

Q: What do cubera snapper eat?

A: Big cuberas hunt for crustaceans such as lobster and crab but their diet also includes shrimp and smaller fish.

Q: How big do cuberas get?

A: Huge snapper can grow to be about 80 pounds in weight.

Q: Where can I find cubera snapper?

A: Large cuberas are solitary fish, and you can find a few in peak season swimming near reefs or near rocks where they can hide if threatened. Young ones remain in mangroves or seagrass beds until they are big enough to venture out safely.

Cuberas are as fierce as they look, but that is what makes it such a great sport fish.

If you are an avid angler who has snagged this monster fish, share your strategies in the comments section, and share this guide if you found it useful.