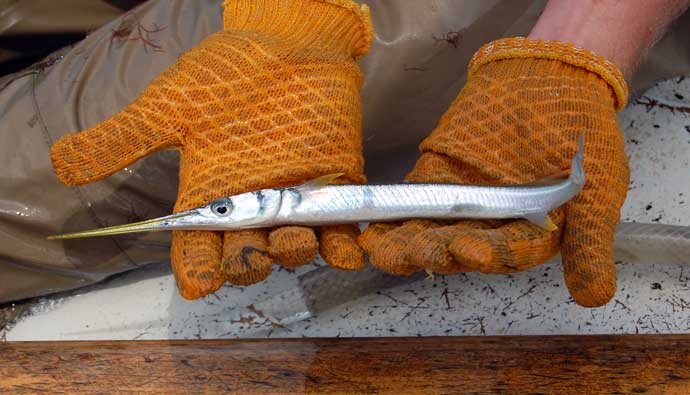 There are over 32 species of needlefish. Some are referred to as sea gar or long-toms.

Most of these species live in cooler saltwater and some also venture into freshwater sources.

The needle-nose is a long, slender fish which fits its namesake. It has elongated upper and lower jaws which are filled with sharp teeth. The upper jaw is smaller than the lower one but in some species, the order is reversed.

The fish has a slender and elongated body that is silver on the side and blue to dark green all along the back. Irrespective of the species you catch, you will get a good table fish out of it.

One of the most spread species of this long and slender fish is called the houndfish which can be found across the globe in warm and temperate waters.

It is quite common in the western Atlantic from New Jersey to Brazil and in the east Atlantic, it can be found in Japan, Australia, and South Africa. The garfish needlefish can be found in the waters around France and the Canary Islands.

The needlefish or needle fish is distributed across the globe.

Some species inhabiting fresh and saltwater sources worldwide. The fish swims close to the surface and hunts smaller fish, crustaceans as well as cephalopods while young ones feed on plankton. If you are fishing for them make sure you are well protected. Excited schools have been known to leap onboard boats leaving deep puncture wounds on flabbergasted anglers in their wake.

You can find small schools of needlefish on the surface that are defended by males when the fish are feeding. The needle nose fish is a fast predator and usually catch prey with a sharp upward swipe of their head while chomping down with sharp teeth.

How to Catch Needlefish

If you want a great catch, you should fish for giant needlefish rather than the puny variety. These can be found in salt, fresh and brackish water swimming near the top of the water and are considered great sportfish on light tackle. The fish jumps like marlin when they are hooked and put up a vicious fight as well.

The good news is that they are not picky about the bait and will bite almost anything so you can use both bait and needlefish lures. Yet, to make your job easier, use lures. The fish takes its sweet time mouthing bait before swallowing it and will often tear it apart without getting hooked. Use lures that have tail hooks to snag them firmly.

You can also use shiny spoons and jerkbaits such as the Yo-Zuri Crystal Minnow to lure the fish.

Use a lightweight saltwater spinning setup for tackle and when you hook a needlefish, don’t go near the rocks. Allow the fish to jump around and it will tire out and throw the hook off itself.

Mating season for this fish with pointy nose falls between the months of April and May. During this time, the males compete for females. You can find large needlefish in shallow waters while it is spawning.

How to Clean Needlefish

How to Cook Needlefish

What do needlefish eat?

Can you eat needlefish?

This fish is edible, but some can be wormy. Remove those before cooking the fish and you should be good.

No species of needlefish is currently under threat.

This pointy-nosed fish may look unimposing, but you can get injured trying to catch it if you are not careful. The long and pointy jaw can pierce through skin and organs like butter especially when the fish is agitated and trying to escape.

Do you have any tips and strategies that can prevent this from happening? Answer by commenting below and share this guide if you liked it.