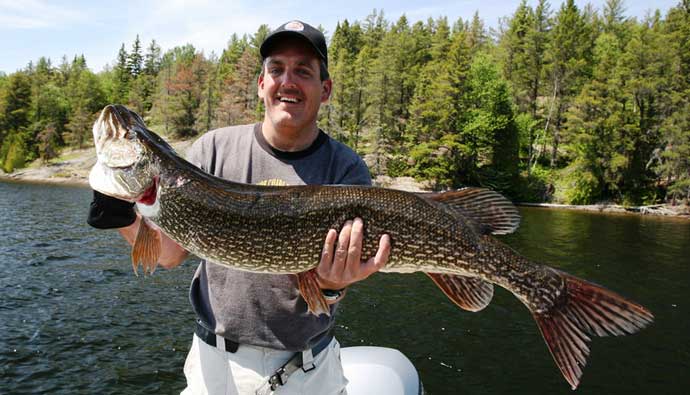 Northern Pike are some of the most exciting freshwater game fish to go after!

They have long slender bodies and toothy powerful mouths! Make sure you don’t get your fingers mangled by pike teeth when you’re removing a hook.

You might just leave the fishing day with one less digit…

These fish can be found in most bodies of water in the northern United States and fight a lot harder than largemouth bass!

In this article, I am going to cover all things northern pike fishing.  This includes understanding the best pike fishing lures, pike fishing tips, where to find them, and even how to eat them.

Seasons for Pike Fishing (And Where to Fish for Pike)

When looking for good areas to search and fish for pike, remember:

Pike often are going to be shallow looking for places to spawn and or spawning. They can almost always be found in areas with high vegetation so that they can stay camouflaged. Follow the trail they leave to deeper water. You’ll also find them over weed beds in the late spring.

They can be found deep in the middle of the lakes and rivers where the baitfish are being rounded up deep by the predatory fish.

They are in the shallows again looking for prey to feed on. Most of the time very well hidden in reeds and grass mats to keep the prey fish from seeing them before they strike. When the fish are hiding in the shallows they will pretty much strike at anything whether they follow it up, or simply react to seeing the bait and engulf it out of instinct.

They are looking for quick easy meals and can be found deep in the middle of lakes and rivers searching for anything easy to eat. Like most fish, in the winter their metabolism slows down as does the fish which causes them to move slower and go after easier targets.

How To Catch Pike (And Pike Fishing Gear)

Fishing for pike is similar in a lot of ways to fishing for bass and other predatory fish, the only difference with pike is their size.

To start off with a good 7-foot medium-heavy rod is the best choice due to the relative size of the fish you are going for.

Yes, you will catch smaller pike but when a tank hits your line I assure you, you will want a bigger rod.

The next thing you need to be looking for is your line, 20-50 lb braided line with a steel leader is suggested.

This is due to the number of sharp teeth in a pikes mouth, which can cut your line if there is not a leader in place.

When choosing a reel, a 2500 reel and bigger will suffice.

The best lures for The Northern Pike can vary from the body of water, but one thing stays a constant, baits with blades and spinners work year around, all you have to do is change your retrieve.

Inline spinners are great baits for any type of predatory fish as they generally catch anything that goes after bait fish.

Always remember when using an inline spinner to use a swivel attached to your leader. The blade on the bait will almost always cause the lure to spin and can tangle and twist up your line over time.

Spoons, just like soft plastic, are another great lure to use for Northern Pike as they mimic baitfish like no other lure.

Yet again like the inline spinners, always remember to use a swivel on your leader as they tend to spin in the water and generally always will twist up your line and cause wind knots if you are using spinning gear.

A topwater fishing lure is another great way to catch Northern Pike as they will typically feed on anything that moves in the water.

Topwater frogs work wonders as you can cast them onto the bank and twitch or wake them back to you.

Topwater rats or mice are another great bait to use for Northern Pike. They feed on any mouse or rat that tends to fall into the water or decides to swim across to the other side. (Which happens more than you would think!)

Topwater ducks and bats work well on a pike as the size of the lures tend to keep Largemouth or Smallmouth Bass at bay.

Many times in areas where there is large pike you will see ducks or geese swimming in the water and all of a sudden a pike blows up on one of the baby birds.

As far as soft plastic goes, you can essentially use any of the best soft plastic baits for bass you would normally use for Largemouth Bass or Smallmouth bass.

Wacky rigged Senkos or stick baits work wonders for smaller pike, as well as smaller swimbaits and creature baits that are texas rigged.

Another method for catching pike is to throw an Alabama or umbrella rig.

This gives the presentation of a small school of baitfish just waiting to get eaten by the nearest predator!

When it comes to fishing for the trophy of a lifetime, there is no better fish than the Northern Pike.

Pike can grow big, quick, and can be some of the best fighting fish on the planet!

Just remember to always go out with a pair of gloves and fishing needle-nose pliers! These fish’s sharp teeth are nothing to play with!

If you live in an area where northern pike is, go out and give them a shot! These fish are always feeding and can be a great fish to go after!

A: Yes! They have rows of sharp teeth on top and bottom as well as strong jaws.

Q: Are pike hard to catch?

A: Not particularly. Being an opportunistic feeder, pike will usually hit anything they see as potential prey.

Q: Where are pike most commonly found?

A: Northern United States and Canada in almost all of the river systems.

Q: When do pike spawn?

A: In the spring.