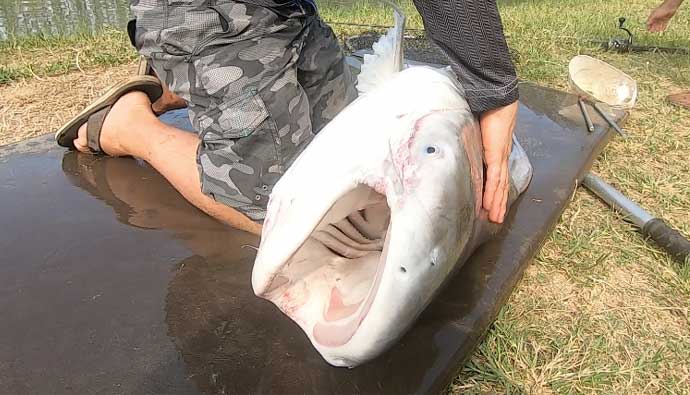 Have you heard of pangasius?

This fish is a large shark catfish species that are native to the freshwaters of South and Southeast Asia. The term ‘pangasius’ is used commercially and it refers to what is colloquially known as basa, tra, or swai, a popular table fish.

In this guide, we’ll talk about two different types of Pangasius. We’ll also show you how to catch the Giant Pangasius Catfish known as the Chao Praya giant catfish.

For more information about fishing in Bangkok, check out my guide here.

There are currently 22 recognized species of this fish in this genus. The body of the fish is generally stout and heavy and the head is rounded and broader than it is longer.

The snout is blunt and it has a white band on its muzzle. The species usually grows to about 12 cm in length (except the giant Mekong river catfish which can grow to about 300 cm in length) and it feeds on plants.

Also known as pangasius, panga, cobbler, and the river cobbler, the fish spawns before the flood season and the young are seen in June. Despite being a coveted table fish, several environmental organizations have raised concerns.

Pangasius fish can be found in medium to large-sized freshwater rivers. They tend to inhabit deep pools but can also be found in rapids and riffles. They feed on shrimp, gastropods, and plants and are a type of catfish that eats other fish.

At the start of the flood season, basa usually migrates into floodplains to spawn. They’re raised and sold in captivity. They migrate from upstream refuges and spawning habitats. They then travel downstream to nursing and feeding habitats.

How to Catch Pangasius

If you like catching big fish, then you need to test your strength against the massive Chao Phraya giant catfish.

Pangasius sanitwongsei are found in Thailand. Catching these cats is pretty straightforward, use a live baitfish with a hook in its tail to entice them to bite. I’ve actually had one bite a piece of banana on a hook…so I’m not sure how picky they are.

Make sure that about 14 inches of the leader run from the baitholder with a J-hook at the end. Attach a piece of bread to the hook under the surface of the bait ball.

Chao Phraya in All Four Seasons

The lifecycle of this fish is dependent on the annual monsoon flood cycle and spawning. This usually takes place between May and June right at the beginning of the monsoon season.

During dry weather, the pangasius cat fish find shelter in deeper refuge areas. It spawns in rapids and sandbanks that include deep rocky channels and pools.

How to Clean Basa

Pangasius is a versatile fish. You can cook it in many ways. Here’s our favorite recipe. Contrary to what a lot of people believe, this fish is fit for human consumption.

NOTE: Please catch and release Giant Chao Phraya as they are on the critically endangered list.

How to Cook Swai

Finding this cheap fish in Asian markets is common. Here is a delicious recipe you can try with it:

The fillets have a delicate texture and light taste which makes them excellent table fish.

The fish is a healthy choice for those who wish to lose weight and maintain their energy levels. It is a rich source of Omega 3 and protein.

Why is pangasius bred in farms?

Since pangasius or basa fish is a coveted and cheap table fish, it is bred in large numbers in catfish farms to fulfill demand.

How many eggs can a female pangasius lay at a time?

A 10kg female can lay over one million eggs during the spawning season. Wild broodstocks spawn twice a year but certain species in Vietnam have been known to spawn 6 to 17 weeks after the first one.

Where can pangasius be found?

This freshwater catfish can be found in the Mekong, and Chaopraya rivers as well as the Mekong basins in Cambodia, Vietnam, and Thailand.

Is pangasius safe to eat?

Some reports suggest that the flesh of the pangasius fish can be toxic. Rejected fish may have high levels of antibiotics and preservatives, so make sure you buy from a reliable supplier.

While fishing information about this catfish is scarce, you can still find it in farms and fisheries that breed it for the market. The eggs and milt of pangasius are mixed to help reproduction and thus increase their numbers to meet high demands.

If you have ever caught this fish, do share your experience and the rigs you used in the comments below and share this article if you liked it.