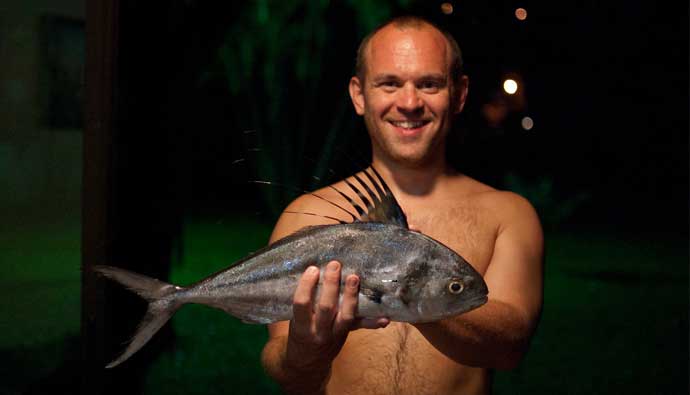 A prized sport fish, the rooster fish should be on your list of fish to catch this season.

If you have a chance to visit Baja California or Costa Rica, this game fish will surely give you a fight worth remembering either from shore or from the boat.

In this guide, we’ll show you the two common methods for bringing in a big one.

Also known as gallo or roosterfish. The roosterfish is the only species of fish in the Nematistius genus and the Nematistiidae family. It used to be considered part of the jack family. But, unlike that species, this is the only species that has a swim bladder that penetrates its brain through the foramina and connects with its inner air. The swim bladder is used to amplify sounds.

The fish has a ‘rooster comb’ or seven long spines that make a large dorsal fin which it uses to reach incredible speeds and maneuver its body. The comb rises in a vertical position when the fish is excited or strikes a surface lure or fly.

Adults can weigh as much as 75 or 80 pounds making it a great game fish. The average fish hooked is about 20 pounds. The fish can be found in the warm waters of the East Pacific coast from Baja California to Peru. It’s a great fish to catch via fly fishing.

Roosterfish can be found in the warm waters of the East Pacific coast – ¼ of a mile offshore along sandy beaches, outcropping, rocky areas, and near estuaries. They can also be caught a mile off the beach if you have the proper live bait.

The game fish prefer waters that are about 80°F or warmer and are active in the shallows when they are feeding. Rocky areas that have sandy beaches on either side are also great spots to find roosters.

How to Catch Roosterfish 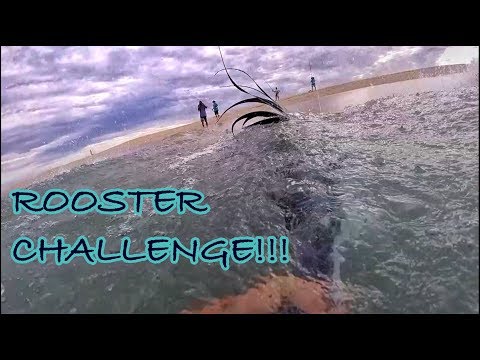 Roosterfish will take live bait which should be about 3 to 4 pounds in weight total. Large ones have huge mouths so use large bait such as blue runner, mullet fish, and bonito.

If you want to use dead bait, use rainbow runners or mullet fish but you will have better chances of catching one with live ones. The game fish is notorious for playing with the bait before biting so you may have to be patient for a while or it won’t get hooked.

They are known to be competitive in schools and it’s not uncommon for them to chase bait or lure considerable distances.

You can take roosterfish either surf-casting or trolling.

The ideal fishing gear for catching this heavy-duty fish is a graphite composite medium to medium-heavy rod that is about 10 to 13 feet long. Make sure that your fly rod is sturdy enough.

Outfitted it with a high-capacity spinning reel. Make sure it is spooled with at least 300 yards of braided line so you don’t spend too much time trying to fight it. You can get away with a 15 to 20-pound line for smaller roosters, but it’s a good idea to go higher if you’re targeting bigger ones.

Surface lures are a popular option, especially surf fishing. Try two or three-ounce pencil poppers and surface spoons. After you cast them out far, reel them in quickly.

While you can spot more roosters in clear water, you can still hook one in muddy water with the right gear. Rig live bait with a circle hook or a dead one with chin weight and a circle hook and troll it down into clear water. Use a surface popper to attract the game fish to the trolled bait.

Offshore islands with vertical walls usually have a lot of roosters near them but they are usually 50 to 100 feet deep underwater.

If you are fly fishing for roosterfish, bring some mullet patterns, crease flies, and minnows that you can throw on top.

Roosterfish Costa Rica fishing is world-class. The best time to catch it is between January and April and the slowest months are September and October. Fish for roosters during the high tide when they’re feeding and are active.

Roosterfish Cabo San Lucas fishing is also top-notch and can be done nearly all year round, but it’s better during the warmer months.

Can you eat roosterfish?

Roosterfish are not usually caught for meat because it has a tough and strong flavor. They’re not considered as a good eating fish.

How does a roosterfish act when it is hooked?

A hooked roosterfish raises its large dorsal fin like a flag out of the water and starts leaping repeatedly trying to unhook itself. That is one of the main reasons why it is considered a prized sport fish.

How big do roosterfish get?

Rooster fishing can be enjoyable if you have the experience, stamina, and patience to take on this behemoth. With its large and gorgeous dorsal fin and muscular body, it is a catch that is worth a trip to Costa Rica where the fish is abundant.

Even though it is not a great table fish, you can still enjoy bragging rights when you catch one. Make sure that you have strong gloves, remove fishing gear, and have some friends nearby to help you.