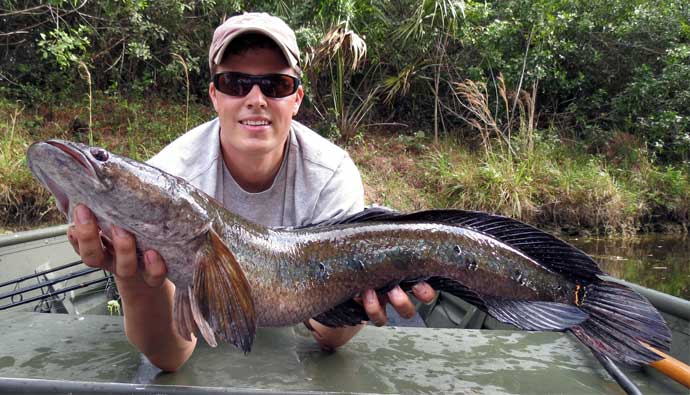 The snakehead fish has been causing a bunch of problems in Georgia and other states. It’s an invasive species and wreaks havoc on the native populations.

There are many species of this fish. The two that are causing the most problems in the US are the Northern Snakehead fish Channa argus and the bullseye snakehead Channa maurlius.

What’s even crazier is that this snake fish can walk on land.

Thankfully, if you catch one of these snakehead fish, you’ll be eating well. These invasive species shouldn’t be released back into the wild, so they might as well make a meal out of them.

The snakehead fish is predatory and native to parts of Asia and Africa. It has an elongated body, long dorsal fins, large mouths, shiny teeth, and basically looks like a snake at first sight. Considered a non-native or invasive species, this unique animal is tolerant to extremely low oxygen levels because of its ability to breathe air. In other words, it can drown if it doesn’t come up to the surface to breathe once in a while.

They feed on zooplankton before they get big enough to eat small insects and crustaceans. Juvenile northern snakehead may feed on smaller fish such as loach and goldfish, and adults are voracious eaters that can hunt prey that is about 33% of its body length such as bream, carp, perch, catfish, and even frogs and beetles.

They can breathe air with their gills which allows them to survive on land. It’s not uncommon for them to waddle out of the water and move short distances to a new body of water.

There are many species of snakeheads that have been released into the wild and have been causing problems in states such as California, Delaware, Florida, Georgia, Hawaii, Maine, Maryland, Massachusetts, Virginia, and Rhode Island.

Two of the most commonly actively targeted by anglers are the Northern snakehead fish and the Bullseye snakehead.

The northern snakehead has been introduced to states such as Florida, Philadelphia, and Maryland.

The bullseye snakehead has become a big problem in southern Florida.

There are many more that we’ll cover in the future. These two are just the most common ones that are causing headaches for local wildlife officials.

Where to Find Snakeheads

Snakeheads live in freshwater and can be found in lakes, ponds, slow-moving streams, rivers, swamps, and marshes.

They prefer shallow moving or still water with muddy bottoms and plenty of aquatic vegetation that it can hide for prey. It can withstand extreme cold and 15 – 18 ppt salinity. Most remain in shallow waters that are about 2.5 m deep only but can swim to deeper waters to spawn.

How to Catch Snakehead 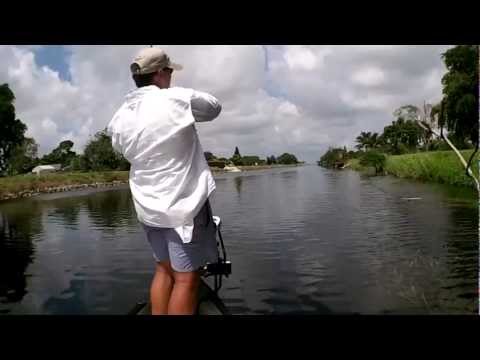 Since their introduction in US waters, snakeheads have been on the list as a target sports species for all anglers. The fish hits hard and fights hard, so you have some competition on your hands when you target it.

Light tackle won’t cut it since you won’t be able to set the hook if the rod is too flexible. Snakehead has a large and bony head, so you need to set the hook forcefully. A basic bass outfit will work, such as a 7 ft medium to a medium-heavy rod that has a spinning or casting reel and is spooled with a 15 to 40 lb line.

The best snakehead lures are the topwater variety that is made of tough but soft plastic. This will work if you want to get your bait deeper in the strike zone. Use lures that can rattle in the water and produce vibrations that the snakehead cannot resist. If you prefer to use bait, use the largest bull minnow you can find to lure the fish out.

Plus, make sure that you have a landing net so you can wrestle a struggling snakehead iny our boat without getting injured or going overboard.

Snakehead fish are abundant when the water warms up in mid-March and all the way through April. This is considered to be the best time of year to catch snakehead, especially if you can find the perfect temperature. During this time, the fish is foraging actively in the middle of water columns. As spring progresses, the fish start to spawn, which is the worst time to fish for it.

Q: Are snakehead good to eat?

A: Yes, the meat of this fish is firm, white, and flaky.

Q: How big do snakeheads get?

A: Adult snakeheads can grow as large as 33”.

Q: Why is the snakehead fish a problem?

A: Snakeheads were introduced to the US from Asia and Africa, but they threaten native species of fish.

Q: Can snakeheads walk on land?

A: Accounts of ‘walking snakeheads’ have been greatly exaggerated, but some species of this fish can wriggle overland to get to another body of water. It survives during this journey by breathing air through its gills.

If you have a chance to visit Asia, then you should try going after the toman fish, also known as the giant snakehead Channa micropeltes. This fish can get to almost 44 pounds and is five feet long!

If you’re in Florida, Georgia, or other states and have a pet northern fish, never release it into the wild. If you can’t keep it and don’t know what to do with it, contact your local department of natural resources and get their advice. The northern snakeheads have been ravaging local ecosystems and we need to do our part to protect native species.

The same should be said about those living in California for the bullseye snakehead. Please don’t release them into the wild. Contact your wildlife officials so they can dispose of them correctly. It makes me wonder if their ability to survive on land makes it that much more difficult to control this population.