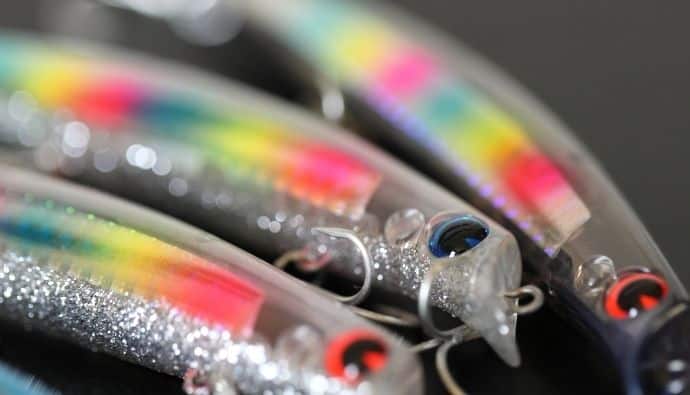 Muskies make for an exciting catch because they’re super aggressive. If you’re up for a challenge, they might just be the fish for you!

However, the problem is that they’re not always biting. With this, you will need to bait your hook with the correct lure to land one.

While there’s no single best musky lure, there are great options to choose from when you’re out on the water.

Below is our list of the best musky lures to help you get started on your first muskie fishing hobby. So, if you want to know what you need to catch your first trophy musky, read on!

Best for Freshwater and Saltwater 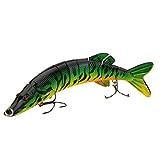 Best Lure for Every Tackle Box

The Musky Innovations Bull Dawg musky lure is one of the best soft plastic musky lures on the market. Another notable feature of the MUSKYI Bull Dawg is its long, curly, and frantically wagging tail that muskies can’t resist.

Aside from its versatility, this musky lure is also hyperrealistic, making it one of the best lures to use for musky fishing.

These multi-jointed hard plastic musky baits are a value-priced tool that will help you land your dream trophy fish. Many anglers opt for this because of its colors and patterns that are perfect for every angling environment.

They’re also multi-jointed with a treble hook and have a life-like look, so they effectively mimic dying bait. Additionally, this Lixada bait set has a quick yet smooth diving action that will catch muskies.

The Double Cowgirl is an easy-to-fish muskie lure that’s a favorite for beginners and experts alike. This muskie bait is designed to create an amplified vibration in the water, thanks to its two #10 spinner blades.

Because of its baitfish simulating action, it can easily mimic live bait for a better angling experience. Whatever terrain you’re in, the Double Cowgirl is a great lure for your tackle box. 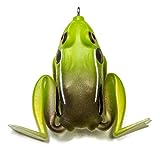 The Lunkerhunt Lunker Frog is a high-quality artificial frog that delivers the results you need. With its impressive attention to detail, even the smartest fish on the lake will try to get a bite!

Not only that, but it has a unique swimming leg action that’s designed to replicate a frog’s natural movements. With this, you won’t have to worry about the fish going anywhere!

Unlike other soft jerk baits, the Slug-Go lures have longer glides. One good feature of the Slug-Go is that it won’t get stuck as you cast it out.

You also don’t have to twitch your rod tip erratically, as soft twitches will dart the Slug-Go from side to side. Not only that, but it keeps its momentum, allowing it to imitate a dying baitfish.

Rapala Magnums are another great option for whichever model you choose if you’re looking for a musky killer. Made with African Abachi wood, these lures are built to withstand even the most aggressive freshwater fish.

They’re also equipped with VMC Perma Steel hooks, so you don’t have to worry about corrosion and performance. Another great feature is that they’re available in various sizes and patterns to match your scenario.

Using live bait to catch trophy muskie is an old technique. It also comes with different problems, like its cost and how to keep it fresh.

Of course, the larger the baitfish, the less you can carry onboard, or you will need a larger container. You’ll also need an aerator to keep them alive.

Additionally, it’s important to choose the right lure for live baiting muskies. With this, make sure to place the bait securely before you cast your line, so they don’t get off the hook. Additionally, ensure that these muskie lures won’t harm your musky.

There are four main lure types for musky anglers. These are surface lures, jerkbaits, crankbaits, and spinnerbaits.

A surface lure is designed to have the ability to move when being reeled. Generally, these are made from wood or plastic and imitate live prey.

A jerk bait is a minnow-shaped lure that provides a horizontal presentation. Doing a straight retrieve adds a shimmying action to a jerk bait so that it swims more naturally.

A crankbait is a type of lure that dives underwater when reeled in. Generally, these are used to land fish at a specific depth.

Spinnerbaits are designed to create motion in the water by using metal blades that spin like propellers. These lures produce different degrees of flash and vibration that imitate small fish or other prey.

There is a whole world of musky fishing options available to help you catch your next big fish. They come in different sizes, colors, and even shapes.

Because of this, it might be difficult to find the best musky lures for your setup. Here’s what to look for when buying musky lures.

Since muskies are large apex predators, you can’t expect them to bite on a tiny snack. Thus, going on a trip with a very small lure on your line will give you a disappointing catch.

With this, it’s best to look for the proper musky rod and a powerful reel. They’re the perfect tools to cast large lures that will give musky a hard time to resist.

If you want to fish in murky water, you want a lure that stands out from the environment. Bright, shiny lures are great for attracting attention and catching muskies.

If you like fishing in clear waters, try a more earthy tone to match the local wildlife. Neat greens, oranges, and tan offer a natural and enticing appeal.

Warranties are generally not an issue. Your musky lures aren’t very likely to break or not work, unlike electronics.

Additionally, you’re going to have a difficult time proving to a manufacturer that your lure just broke on its own. With this, contacting the lure’s manufacturer is the best way to address your problems.

Muskies love being in the shadows, but that doesn’t mean getting them to come out will be easy.  With this, you want durable lures that can withstand getting dragged through the dirt or cast around logs and trees.

You also want lures that can bounce off of underwater obstructions—getting one that can penetrate a weed bed and thick weeds is also recommended.

When fishing for muskies, you can choose from topwater baits or deep divers. However, keep in mind that there are certain times when a topwater will work better than a deep diver.

Since the heat is scorching during summer, the fish go into deeper water to stay cool. It is when deep divers come in handy. On the other hand, fish swim to the top of the water during the colder seasons.

Let’s face it: musky lures are expensive. Most cheap baits cost around $4 to $5, while the more expensive ones can go up to $20 to $30. If you want custom lures, expect to pay not less than $50.

What is the best way to catch a muskie?

The most popular technique to catch musky is to cast large lures made with soft plastics. Generally, most anglers recommend using ones that are five to 10 inches long. You can also use ones with treble hooks.

Muskies feed on sight, so they like to bite on lures that imitate their prey. Muskies like colors include black, pink, blue, green, brown, chartreuse, and white.

The Best Musky Lures for You

Musky lures are an effective way to help you land the fish swimming around your chosen spot. This list has everything you need, even for pike fishing!

Whether it’s a topwater musky or one in deep water, remember to lure slowly so catching fish can be a success.

Whatever you choose, these musky killers are sure to help you land that big musky on your next fishing trip.

If you haven’t found what you like, you can also check out the Fully Reef Hawg! Lastly, remember what lure works, so your next trip will be a breeze!