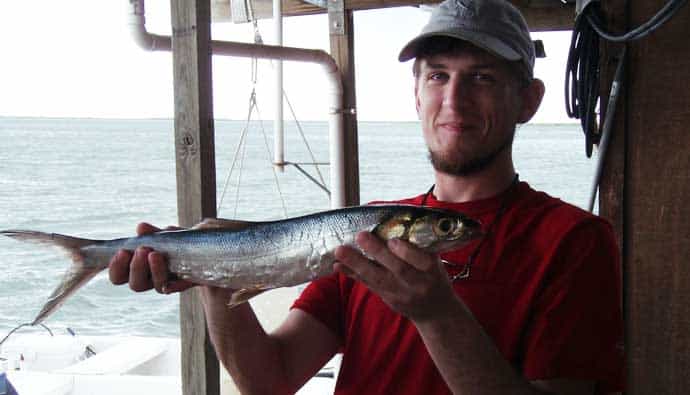 My guess is that you’re not going to head out on the water for the day just to catch ladyfish Elops saurus.

Anglers often ask, can you eat ladyfish? Just check out some of the YouTube videos and you’ll see why most people would rather spit it out than throw it down the hatch.

However, if you do want to catch one of these fish, here’s how we recommend you do it.

Also known as skipjack fish, long john, bonyfish, fiddler, elopid, banana fish, and ten-pounder, the ladyfish has a long, slender, and elongated body with a compact oval cross-section and a deeply forked tail. The head is pointed, and it has a large mouth and eyes. Ladyfish are tolerant of brackish water and can grow to about 3 feet long and weigh about 15 pounds.

Ladyfish occur in the western North Atlantic Ocean from Cape Cod, Massachusetts to the Gulf of Mexico and the Caribbean Sea. It can also be found in waters around Bermuda. It feeds on smaller fish and crustaceans once it grows old enough.

Where to Catch Ladyfish

The lady fish can be found in brackish water lagoons, bays, and mangroves and can withstand a range of salinities. Some have also been known to be found several miles offshore. The fish prefers open waters in channels that experience moderate currents as well as shallow bars and eddies at the bends in rivers. It can also tolerate low temperatures for short periods.

How to Catch Ladyfish 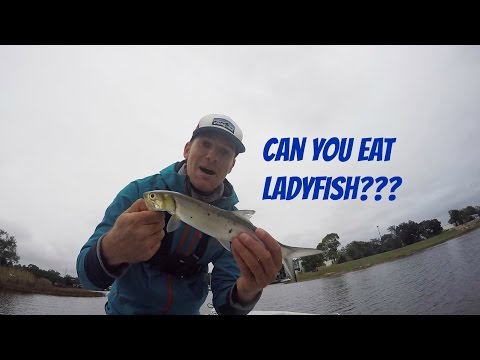 Known as the poor man’s tarpon, ladyfish Elops saurus is not often sought after but its fighting strength and jumping ability make it a good sports fish. Use spoons to search for them. These are easy to throw and are preferred by the fish since they love to chase and swallow fish whole.

For live or dead bait use the fish’s favorite prey such as mullet, anchovies, sardines, and menhaden as well as shrimp and crustaceans. The biggest ones will be a challenge to catch so use a fast action spinning rod that is about 7 feet in length.

If you are using live bait, use a medium-action rod instead. The extra flexibility and whip will keep the live bait from getting ripped off. Plus, if you are using lures make sure it is moving at a fast pace or the ladyfish will ignore it.

Once you’ve caught ladyfish, be very careful when you are handling it. It has sharp sets of tiny teeth that can penetrate the skin and cause injuries. Unhook the fish using special fish pliers while holding around the fins to prevent a nasty cut and make sure you have strong gloves on as well.

Plus, be ready to mop up muddy poop that ladyfish will spray on the deck once it is brought on board. A mixture of liquid detergent and a cup of white vinegar will wash those stains right out.

Ladyfish can be found year-round but the location varies according to season. In spring, the fish is dispersed throughout estuaries and bays that have modest salinity. In summer, the fish will keep away from the harsh sun in deeper waters and shallow waters when it goes down or early in the morning.

During this time, look for ladyfish in backwaters in between grass where it will be looking for food to prepare for the spawning season. Similarly, during fall, the skipjack fish adults move offshore for some time to feed before spawning; the same is the case in winter.

Q: Is ladyfish good to eat?

A: No, but it is fun to catch. There is a reason why you won’t find many ladyfish recipes online. It does not taste good and is considered a trash table fish.

Q: What are ladyfish good for?

A: This fish rivals mullet as one of the best baitfish and is taken dead or alive by trout.

Q: What do ladyfish eat?

A: Juveniles forage for zooplankton and adults go after small fish, mullet, shrimp, and crustaceans.

Q: How do you catch ladyfish in the surf?

A: The three best ways to catch ladyfish in the surf are to use a chartreuse lure, cut bait, or live shrimp.

The ladyfish is not good to eat, but owing to its strong fighting abilities, it is a great sports fish, so you won’t waste a day out on the water. Even if you don’t release them, you can always cut them for cut bait or chum to attract larger fish.

Don’t confuse it with the tarpon though. This fish has a trailing filament on the back edge of the dorsal fin, a feature that is absent in the ladyfish.