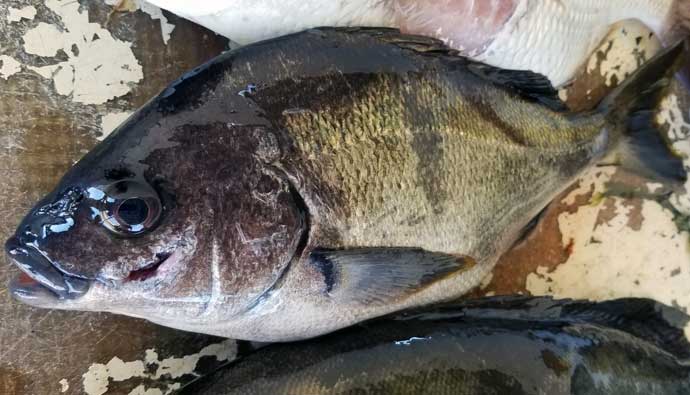 Sargo is a fun fish to catch and spear. The last time I was in Baja, schools of them would swim through the kelp and come within inches of me.

This fish is the largest of the Pacific grunts and is usually caught by anglers by accident especially during the summer.

They are also great to eat! Let’s help you catch one.

Adult sargos have a compressed and oval-shaped body with an elevated back. The upper profile of this fish is steep and straight, it has a small mouth and it is metallic silver in color with a grayish tinge. Some sargo fish can also be completely orange, yellow and even pure white in color. The fish can be found in the eastern Central Pacific in waters ranging from Magdalena Bay to Santa Cruz, California.

The sargo fish is a bottom feeder like most croakers and it feeds on crabs, clams, snails, and shrimp. It swims close to the bottom in loose schools and spawns in later spring and early summer.

Sargos can be found inshore and in bays over rocky and rocky/sandy bottoms. They are pre-dominant in kelp beds, around pilings and other submerged structures. Even though they can be found over 130 feet underwater, they are usually swimming in water that is 8 to 25 feet deep only. They are commonly found in southern Baja California to about Santa Monica Bay and are native to the eastern Atlantic and western Indian Oceans.

How to Catch Sargo

Sargo prefers to remain near submerged rocks and structures which it can hide in when it feels threatened. When it bites, it can either tense up or loosen the line so make sure that the line remains taut as you reel it in.

Use a simple rod and reel to fish for this species of croaker but make sure the setup has strong resistance with a 20-pound line. The saltwater rod should be long (about 3 to 3.6 meters) and should be strong enough to stand up to 30 pounds. It should also be rigid enough to take on this combative fish without breaking off especially when you are trying to reel in a sargo from the rocks.

We covered catching other fish in our spearfishing California guide if you haven’t checked it out yet!

The best season for fishing for sargo is the beginning of fall in April or May. As the season progresses, the fish swims further east but it won’t disappear from the radar completely irrespective of the time of year. Certain ports such as Jose Ignacio see sargo all year long but the highest season ends in November. During that time you won’t be able to find large shoals easily.

How to Clean Sargo

How to Cook Sargo

The sargo fish has good meat which has a taste and texture that is like croakers. It’s best grilled, baked, or fried.

The fish consumes small crustaceans, mollusks, seaweed, and even some types of coral. It uses its strong jaws to crush shells.

How big do sargos get?

The sargo fish can reach a length of 22 inches.

What is the best bait to catch sargos?

Use natural bait such as mussels, squid, shrimp, prawns and sea snails to lure this fish on the hook.

Sargos are tough to catch and delicious to boot, two facts that make them irresistible to novice and seasoned anglers. Plus, since the fish is available year-round, you can try your hand at fishing for it in any season you want.

Do you have any tips, tricks and spearfishing strategies that are effective in catching this fish? Share your answers in the comments below and share this guide if you liked it.