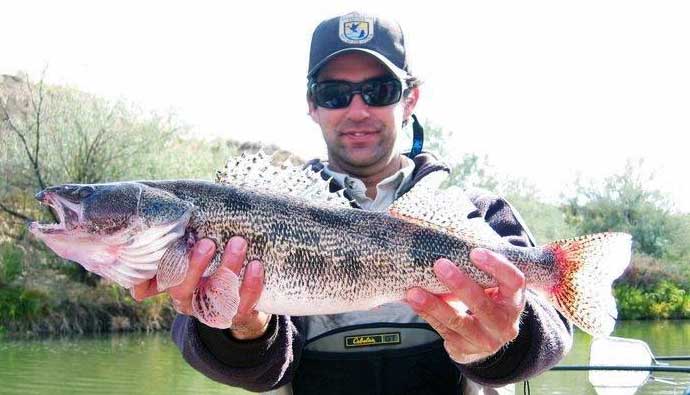 Sauger is a popular fish that can be targeted all-year-round.

Depending on where you live, you can go after them ice fishing during winter months or especially during spring in the southern regions.

It is often confused with its close cousin, the walleye because of the stark similarities between the two species.

I hope you’re amped to go catch them. Use this guide to help you catch more during your next outing.

We get asked a lot, what is a sauger?

Sauger is a freshwater species of fish that is a member of the largest vertebrate order called Perciformes. The fish can be found in North America, northern Europe, and Asia and it is known for its fighting spirit as well as delicious and flaky meat.

The sauger is a slender and spiny rayed fish that has two separate dorsal fins, a large mouth and an upper jaw that extends to the hind edge of the eye. It has distinct botches on the sides as well as dark spots on the first dorsal fin.

Yet, unlike the larger and solid gold-colored walleye, the smaller sauger fish is brassy in color and have the same pattern all over their body. It often interbreeds with walleye if their ranges overlap to produce saugeye fish.

The walleye vs sauger question comes up a lot. Sauger’s resemble the walleye closely. What’s even crazier is that they cross breed with walleyes to create saugeyes!

The sauger will have dark black spots (blotches) or solid gold markings on its sides. Walleyes don’t have as pronounced dark markings.

They both have a similar shape dorsal fin, however, sauger’s will have black spots. The tails of walleyes have a white marking on the bottom which should be easy to spot.

Saugers are smaller than walleyes. Their body is more slender and tends to be shorter. If you want to compare the saugeye vs walleye, saugeyes are close to the size of walleyes and have the markings of the sauger.

Sauger fish prefer to remain in cloudy and moving water as well as quite backwaters over sand, mud or bedrock substrates. These are found along the mouth of tributaries and in deeper tailwaters over rock and rubble substrates near dams.

As a cool water species, it favors water that is about 67°F. It can also be found deep underwater in the Ottawa River in Ontario. It’s not uncommon to have sauger found in shallow lakes and other slow-moving bodies of water.

How to Catch Sauger

The best way to catch sauger is with a vertical jig. Use a large and heavy one that is about an ounce heavy and made of soft plastic. Make it more enticing by tipping it with a minnow so that the fish can locate it by its scent. A heavy jig will be able to sink 30 to 40 ft deep where the sauger is and won’t be buffeted much by the current.

Don’t worry about the fish’s smallmouth. It tends to pounce and pummel passing jig as it hops off the bottom so the fish will bite eventually. If you are fishing in water that is snag-free, you have a heavy lead head or a thin but heavy plastic-tipped jig that can pull well through the current.

Another way to catch them would be to do a split shot rig with a shiner on the hook. Drop it down to the bottom and wait for the bite.

Wintertime is considered the best season to fish for sauger fish. The fish congregates in deep pools in river bends and in tailwaters below dams.

How to Clean Sauger

How to Cook Sauger

Are sauger fish good to eat?

Sauger is a delicious fish. It has firm, white and flaky meat that is sought after by seafood enthusiasts. Some say it is sweeter in taste than the walleye.

When do sauger spawn?

Saugers spawn in spring in water that is about 2 to 8 feet deep and the young hatch in about 2 to 4 weeks.

How big can sauger get?

Sauger is incredibly pleasing to the palette which makes it an amazing table fish. Even if you catch small ones, you will enjoy a hearty meal after your fishing trip.