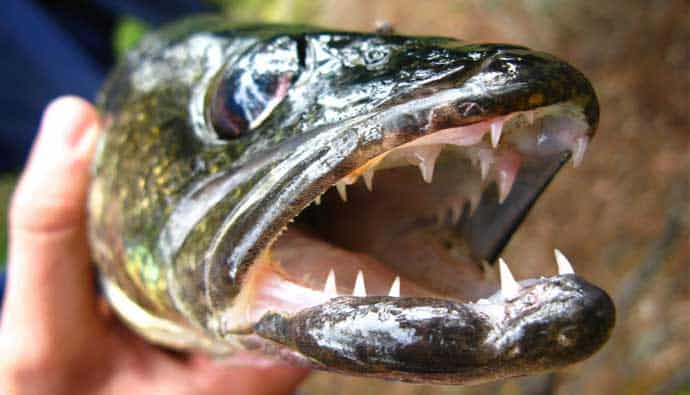 Walleye fishing can be confusing.

For some reason, many anglers get walleyes (stinzostedion vitreum) mixed up with some fish that aren’t even in their same family (Percidae).

Did you know the walleye is the largest member of the Percidae family?

Sometimes they are called other names such as yellow pike or yellow walleye. These fish are native to Northern America and are a popular freshwater sportfish.

Though they may have similar characteristics to pickerel, it’s worth noting that they aren’t related.

Did you know that the walleye is the state fish of Minnesota, Vermont, and South Dakota, as well as the official fish of Saskatchewan?

In this article, we’ll cover how to identify what they look like, what they eat, how to catch, and how to cook them.

Let’s go catch ourselves some walleye!

What is a Walleye?

The name “walleye”, comes from the fact that the fish’s eyes point outward. This outward pointing position of the eyes can give an angler an advantage in the dark because of the light shine effect on the walleye’s eyes.

This is because of the position of the eyes and the layer over the eyes called the tapetum lucidum. This layer allows the walleye to capture available light to be able to see in low lite conditions.

This is common to many predatory animals in the wild such as feline and canine predators. This also gives them an advantage in searching for prey at night. This is also very beneficial to walleye, allowing them to see in muddy and turbulent water.

The closely related blue walleye, native to Southern Canada in areas such as Ontario and Quebec, now are presumed extinct.

However, recent studies on a frozen specimen of blue walleye actually are suggesting that blue and yellow walleye may actually be the same fish.

More research is being done to determine genetic markers. as well as other information, to see if this is just a difference in color pattern between two fish that were thought to be different species. But it may actually be the same.

Walleyes often get confused with sauger fish and form hybrids with them called saugeyes.

Walleye are mostly olive and gold in color with the olive/gold pattern broken up by five darker saddles that extend to the upper sides.

The color shades to white on the belly.

Walleye have a large mouth full of extremely sharp teeth. These teeth do a pretty good job of holding onto just about anything the walleye strike.

Walleye reach sizes of up to 31 inches in length and can weigh up to and above 20 pounds depending on the conditions. In the walleye family, females are generally larger than males.

They have a slender and cylindrical-shaped body with large spiny dorsal fins.

These fish are known to live for decades, with some reaching up to and possibly over 30 years. This too is relative to the conditions.

Spawning usually occurs in the spring. Walleye migrate to smaller tributaries with rocky or gravel bottoms in shallow water that allow the eggs to attach to the rocks and avoid sinking into the mud.

Larger female walleye can lay up to 500,000 eggs or more in one spawning season. After spawning the eggs and resulting “baby walleye” are left to fend for themselves.

Walleye can typically be found in large bodies of water like reservoirs or lakes. They can be found in smaller bodies but it’s less common.

They like gravel and sandy bottoms but also gravitate towards sunken structures like a downed tree, standing timber, boulder shoals, and reefs.

When waters are more clear, the walleye tend to stay in the deeper waters where oxygen is richer. This can be deeper pools and dropoffs.

Just as with lures and technique, the same gear used for bass fishing can be used for walleye. Keep in mind however, some of the walleye you hook can be large. You would not want to skimp on your choice of reel here.

Walleye tend to fight much like bass as well so you can expect to have a pretty good fight when you hook up to one.

During the summer months is a good idea to try live bait rigging for walleye. A good setup for this style of walleye fishing would be a 7-foot rod with a medium-fast to fast action.

Regarding a reel, a good option would be a size 2000 spinning reel with 10-pound Fireline spooled on it with the smoke color. Make sure you put on a good 6-7 foot leader of fluorocarbon on the end so the fish can’t see the line.

The two rigs worth testing out would be a bottom bouncer or a Lindy rig (slip sinker).

For more details, be sure to watch the video below!

The Abu Garcia Pro Max Low Profile is a great choice for walleye and bass alike. It is affordable and durable.

Because this is a baitcasting reel it can allow you to land a lure into just about any cover with pinpoint accuracy. If you decide to go for a spinning reel, be sure to check out the Penn Battle II or equivalent around size 2000.

As for the best walleye fishing rods, the Ugly Stik GX2 is a good rod for the money.

This combination makes a good choice for walleye, bass, and just about any other variety of freshwater fish.

The walleye fish is a native fish to the Northern United States and Canada. They are known primarily for their yellowish color and close resemblance to the pickerel.

They are known to grow large and actually make great table fare.

Some even say they are sweet and have fine-textured meat.

They aren’t known to be crazy fighters once hooked, but their size and meat surely make up for it.

Walleye like most predatory fish will strike just about anything they perceive as prey or a meal. Because of the position and light refractory ability of walleye, many anglers prefer to fish them late in the evening or at night.

When deciding on an area to fish for walleye, the murkier, more cloudy, and even turbulent water is a good place to start. Walleye will usually be found in these areas looking for an unsuspecting meal.

As for the best time of the year to go walleye fishing, it’s in the spring and in the fall. However, if you’re into ice fishing, you can also catch walleyes jigging.

Walleye fishing is similar to bass fishing. As a matter of fact, it is a good idea to fish for walleye just as you would for bass.

They will usually be found in the same type of areas and hit the same types of lures. This is especially true of jigs.

Size is not always the most important thing to consider when choosing a lure for the specific fish you are going after. This is certainly the case with walleye fishing.

It’s important to know what they eat if you want live bait.

Walleye primarily consume other fish and critters such as:

Many anglers are familiar with the mayfly. Mayflies that hatch and make their way to the surface become an excellent food source for walleye.

The larvae are only an inch long in size but make a quick and easy meal for the walleye. To make what is known as the “mayfly rig” take a small spinner with a portion of a nightcrawler on a small hook.

Cast the rig out and count it down, then retrieve it slowly, working with depth until you find the strike zone. 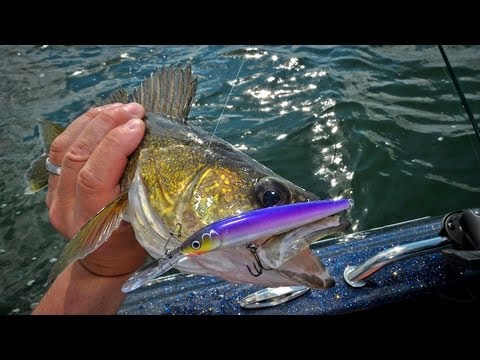 Good things happen to the angler who is active while trolling. If you’re not getting any luck with a certain lure, try switching it out to a different color.

Be creative and active and see what the walleye are feeling for that day.

If you’re bored trolling, then you deserve not to catch walleye. Be active and engaged the whole time and troubleshoot why things aren’t working.

Also, remember that if you’re not having luck during the day, it might be worth night fishing for walleye as well.

The same holds true when using jigs. Since walleye have keen eyesight, they can see smaller jigs very well.

This helps the angler because depending on the area you are fishing, smaller jigs can get into smaller areas without the risk of getting hung up.

We can’t forget the fly fisherman. Fly fishing for walleye is a great experience. If you have never tried it, we highly recommend you get after them ASAP!

Even the most die-hard bait caster or conventional reel fisherman would consider fly fishing for walleye a rush.

Because of the keen eyesight of the walleye, an angler can work on his stealth skills here. Once hooked, they are on the run. Sometimes straight at you!

Flies of various varieties are favorable to walleye. Take water clarity into consideration when deciding on a fly.

Because they can see them so well, anything that looks “suspicious” or “stands out” can spook them.

Walleye avoid light-best times to fish are morning and evening, and cloudy or overcast days. They take almost any bait or lure in spring and feed well in fall. It’s more challenging to catch walleye in summer.

How to Cook Walleye

Are walleye hard to catch?

Not particularly. The main thing to remember is their keen sense of eyesight. Anything that looks out of place, they will pick up on it.

Where to catch walleye?

Walleye are native to North America and Canada. They can be found in almost all the freshwater river systems in the area.

Are walleye a type of bass?

No. Walleye can be fished for much in the same way as bass and can be found in the same areas. But they are not the same species.

Yes! They have a mouth full of very sharp teeth. Whether intentional or not, they can do damage to walleye anglers hands.

Walleye are known for hanging around the edges of submerged vegetation. Be on the look out!

These fish see better than most fish and for this reason, an angler must be on top of his game in order to hook up to one.

If you are lucky enough to land a walleye in the near-record weights, you will most likely be there for a while.

We hope this article on walleye fishing has been informative and helped encourage you to go out and catch walleye.

Just remember that walleye teeth are sharp so be careful when you unhook!