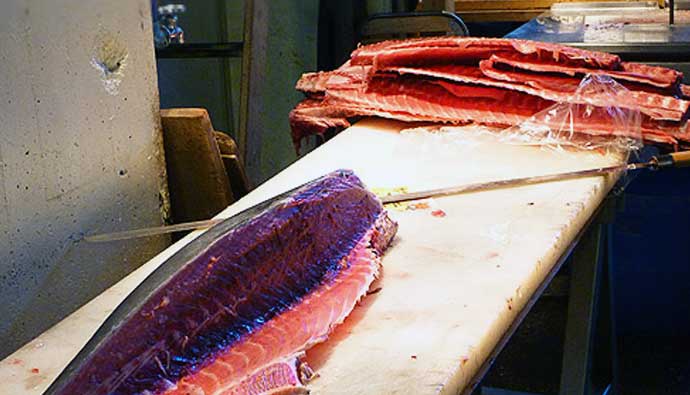 This is a common question we get from fishermen after they’ve caught their catch, “should I use a boning blade or a fillet blade to prepare my fish?”

The answer is that you should use a fillet knife, but in a bind, you can use both.

Let’s take a deeper dive into the boning knife vs fillet knife debate! 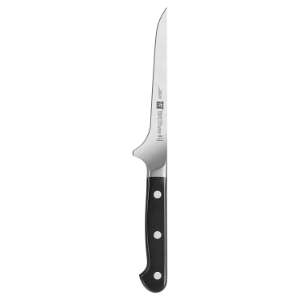 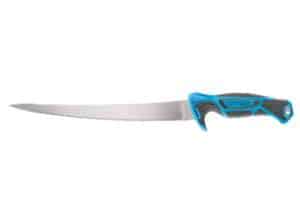 What are the Differences Between Boning vs Fillet Knives?

The purpose of a boning knife is to remove the meat from the various bones found in a cut of beef. You can imagine grabbing a bone-in steak and needing nimble blades to work the tight spaces the different bones call for.

Comparing a boning blade to a kitchen knife, you’ll notices that that between the two knives, the boning knife will have a thinner blade. However, when looking at a fillet knife vs boning, the fillet knife will be even smaller yet.

A boning blade needs to be made of quality steel since the bones are dense, and the blade can dull or become damaged if not careful. It doesn’t need to be as flexible as a fillet knife, but they do come in handy if you are fish boning a large fish.

The purpose of a flexible fillet knife is to remove the flesh from the meat. That means you’ll need sharp blades that have a bit of bend in it so you can get the right angle to put enough pressure in the space between the meat and the skin.

Also, remember that the meat of a larger fish is generally less dense than that of a land animal, and therefore the thinner blade will be all that’s required to cut through while navigating the smaller and less dense bones.

How to Choose the Right Boning and Fillet Knives

Let’s dive further into the boning knife vs fillet knife conversation with a closer look at what determines the quality of the gear.

When selecting a boning knife, make sure you get one that’s made of super-hard steel. Look for one that’s around 60 on the hardness scale. The higher quality boning knives will have multiple layers of stainless steel wrapped around the high-carbon steel, which will help with corrosion-resistance.

When it comes to a fillet knife, you’ll want one that’s flexible, which likely means it’ll be stamped while made. This is fine; however, that means the hardness factor will be around 54, which means it’ll dull faster and need to be resharpened more often.

Make sure you pick a grip that fits with your hand size and overall feels good. You’ll be wielding a sharp edge around some pretty challenging obstacles, so if it doesn’t feel comfortable, it could lead to serious injury.

When it comes to selecting your length, there are a bunch of options. 6 and 9 inches are pretty standard sizes, but there is a range that you can pick from.

If you don’t know how to sharpen your blades for optimal cutting, then you’ll be required to visit a professional. This can be expensive, so make sure you factor this into the cost. Sometimes you can get a brand that will offer free sharpening for life…take it, even if you have to pay a bit more upfront.

It’s always smart to keep your knives in a safe place. We like a magnetic knife holder like the one below.

Q: What is a boning knife used for?

A: A boning knife is used to remove tissue from the bones of an animal. They usually have a thinner blade than kitchen knives, but not as flat as fillet knives.

Q: What are the best boning knives?

A: The best boning knife is the ZWILLING J.A. Henckels flexible boning knives. These butchers boning knife rock a 5.5-inch blade and will last you a long time of cutting. If you’re looking for the best budget knife, then you should look at the Victorinox Swiss Army Cutlery Fibrox Pro 6 inch blade length. We also like the Shun boning knife if you forced us to pick one more.

Q: What is the best knife for filleting fish?

A: Fish knife filleting is a topic all in itself. Everyone has a favorite blade length, but if we had to choose one for you to try then we recommend the Gerber Controller Saltwater Fillet Knife. Another option would be to look at one of the electric fish fillet knives out there.

Q: What is a bone knife?

A: A bone knife is a blade made from a bone. It’s a primitive type of knife that still has appeal to certain people today. You can use it for any application that doesn’t need steel to cut the material.

Q: What is the best steel for a fillet knife?

A: The best steel for a fillet blade is stainless steel. You want an edge that will resist corrosion with minimal upkeep. If you are professional, then you might want to look at some high-carbon steel blades, but just remember to keep them properly maintained, so they don’t degrade over time.