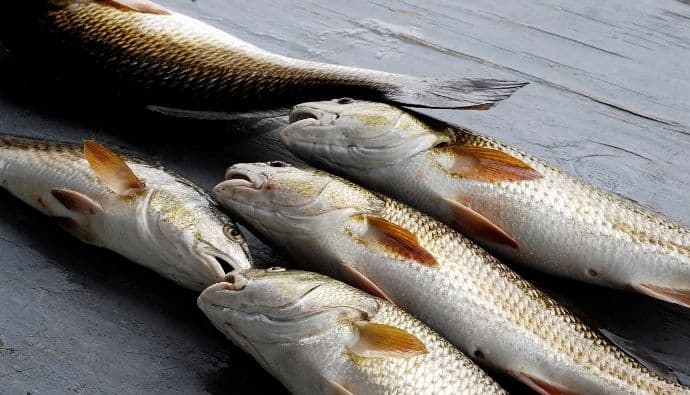 The sun is shining, the weather perfect, and the fish massive. However, the optimal season may vary depending on the species. While redfish can be year-round fish, certain seasons may necessitate different tactics, different locations, and even yield different sizes of fish.

There is no one formula to solve the elusive redfish, but paying attention to the redfish season certainly helps.

Just like the Phineas and Ferb song says, the days are longer, and the nights are shorter. Summer is often associated with the busiest season of angling. This does not necessarily mean that it is the most productive for redfish though.

Summer months are peak fishing in general. The bait is plentiful, the days are longer, and the water is warmer. Because of these factors, Redfish will often be found in shallower water.

Anglers should head into the flats and offshoots in the marshes to capitalize on this.

During the summer, the tide is a major factor in angler success. Rising or slack tides are excellent, but a falling tide pulls the fish from swamps and mangroves and should be avoided.

Getting on the water early in the morning or closer to dusk will provide a better opportunity to catch reds. This is because their bait will have a more difficult time spotting them, and thus they feed heavily in lower light hours.

Redfish begin to spawn during the end of the summer, and it’s not uncommon to catch close to a dozen during this time.

However, the end of the summer brings its own set of challenges, including hurricane season. Redfish are incredibly sensitive to barometric pressure and will flee to deeper waters if a storm front arises.

Generally, run out is the best month to angle for reds. Fall can bring with it a boatload of copper monsters. Due to spawning coming to a close, the redfish are usually famished and require an immense amount of food to restore their energy levels.

Because of this, their aggression will usually be through the roof, meaning their activity towards redfish baitfish and lures will be two or threefold of what it was in the summer.

Instead of directly heading to the previously successful summer hotspots, anglers should look for flats and deeper water junctions and cast in the creeks and inlets.

A structure can also be an effective landmark to cast against or by.

The optimal time to angle for redfish is during a tidal change. The transition from high to low or low to high brings with it bait, and towards the end of fall, Redfish have slowed down.

They will often sit just outside the current and wait for bait to be brought to them on a silver platter.

The least effective and successful time angling for redfish in the fall is on the cusp of winter.

Lethargy consumes the fish, and they become slow-moving and docile. Because of this, late September, October, and early November are the best times to get on the water and get in on the action.

Redfish can be found in the winter, but it is the worst time to fish for them. The cool water, shorter days, and less sunlight combine to make the least ideal fishing conditions for an aggressive shallow water predator. Some redfish will go days without eating because their bait has left for warmer waters.

Ideal conditions for seeking out redfish in winter weather include the sunniest days, low wind, and patches of warm water.

On days with copious amounts of sunlight, mangroves or flats can be found harboring redfish looking to warm up.

Utilizing chum can be incredibly effective during this season. Because the bait fish have left for warm tropic waters, the introduction of chum to the environment can instigate a feeding frenzy.

With the return of warmer weather comes an increase in water clarity and temperature. This causes the baitfish to return in large numbers.

The result is feeding frenzies from redfish. Due to their inactive state during the winter and loss of energy and food sources, the fish will be looking to make up for the lost time.

The pinnacle of springtime fishing comes around March. Before the Spring rain and storms begin to permeate the weather, the water is usually clear and calm.

This allows the redfish to see well and be able to identify their prey with ease. However, it also enables the redfish to observe any incoming predators making them incredibly skittish during the spring.

Working off of schools of bait or sight fishing can be incredibly effective during the spring. Again, it’s easy to observe redfish chasing bait in the shallows because of water clarity, and anglers of all skill levels can capitalize on this.

Anglers can find their quarry in marshes or shallows during the spring.

Each state in the Redfish’s habitat has its own set season for redfish and its own individual limits.

Texas: Open year-round season, with a size cap that’s no less than 20” but no more than 28”. Three redfish per person is the limit.

Louisiana: Open year-round season, the size range is between 16” and 27”. Anglers are allowed to have a daily bag limit of 5, with two of those being over the size limit.

Mississippi: Year-round season, the legal size is between 18”-30” with a bag limit of 3 per day. Recreational anglers are allowed to keep a single fish over 30” per year.

Alabama: Year-round season, the legal size sits between 16”-26” with a bag limit of 3 fish per person.

Florida: Year-round season, Statewide legislation dictates the fish must be between 18”-27” with the bag limit varying per zone.

Atlantic: Year-round season, the regulations vary depending on the state waters, while federal waters prohibit angling for reds altogether.

South Carolina: Open season year-round. There’s a 3 fish per person limit. Each fish must be 15’-23” to be considered legal.

The success of angling for Redfish is often incumbent upon the season you find yourself on the water.

As a general rule, Fall tends to be the most prosperous of seasons, but Spring and Summer have their own benefits.

Winter tends to be the slowest of times, but Redfish can still be caught. It’s important to select one’s charters or fishing expeditions according to the season to reap the most benefits while providing the most enjoyable experience for the angler. As always, stay safe on the water, and good luck.